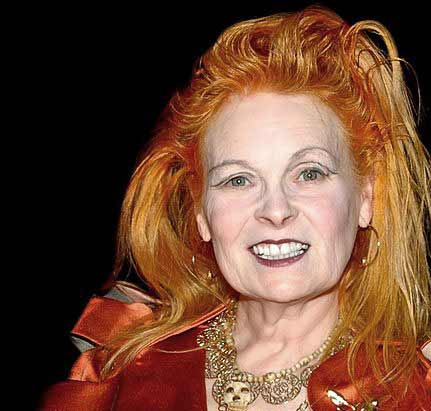 Westwood came to public notice when she made clothes for Malcolm McLaren’s boutique in the King’s Road, which became known as “SEX”. It was their ability to synthesise clothing and music that shaped the 1970s UK punk scene, dominated by McLaren’s band, the Sex Pistols. She was inspired by the shock-value of punk—”seeing if one could put a spoke in the system”.

Westwood went on to open four shops in London, eventually expanding throughout the United Kingdom and the world, selling an increasingly varied range of merchandise, some of it linked to her many political causes such as the Campaign for Nuclear Disarmament, climate change and civil rights groups.

In 1992, Westwood was awarded an OBE, which she collected from Queen Elizabeth II at Buckingham Palace. At the ceremony, Westwood was knicker-less, which was later captured by a photographer in the courtyard of Buckingham Palace. Westwood later said, “I wished to show off my outfit by twirling the skirt. It did not occur to me that, as the photographers were practically on their knees, the result would be more glamorous than I expected,” and added: “I have heard that the picture amused the Queen.” Westwood advanced from OBE to DBE in the 2006 New Year’s Honours List “for services to fashion”, and has twice earned the award for British Designer of the Year.

In 2012, Westwood was among the British cultural icons selected by artist Sir Peter Blake to appear in a new version of his most famous artwork – the Beatles’ Sgt. Pepper’s Lonely Hearts Club Band album cover – to celebrate the British cultural figures of his life that he most admires. Also in 2012, Westwood was chosen as one of The New Elizabethans to mark the diamond Jubilee of Queen Elizabeth II. A panel of seven academics, journalists and historians named Westwood among a group of 60 people in the UK “whose actions during the reign of Elizabeth II have had a significant impact on lives in these islands and given the age its character”.

In October 2014, the authorised biography Vivienne Westwood by Ian Kelly was published by Picador. Paul Gorman described it as “sloppy” and “riddled with inaccuracies” on the basis of multiple errors in the book including misspelling the names of popular rock stars “Jimmy” Hendrix and Pete “Townsend” and misidentifying the date of the Sex Pistols’ first concert and McLaren’s age when he died in 2010.

Picador publisher Paul Baggaley told The Bookseller: “We always take very seriously any errors that are brought to our attention and, where appropriate, correct them.” A spokesman for Pan MacMillan, which published an Australian edition of the biography, confirmed that the matter was being handled by the publisher’s lawyers.

In January 2011, Westwood was featured in a Canadian-made television documentary called Vivienne Westwood’s London in which she takes the viewer through her favourite parts of London, including the Courtauld Institute of Art, the Wallace Collection, Whitechapel (accompanied by Sarah Stockbridge), Hampton Court, the London Symphony Orchestra, Brixton Market and Electric Avenue, and the National Gallery.

In 2018 a documentary film about her, called Westwood: Punk, Icon, Activist, premiered.

Westwood is married to her former fashion student, Austrian Andreas Kronthaler. For 30 years she lived in an ex-council flat in Nightingale Lane, Clapham, until, in 2000, Kronthaler convinced her to move into a Queen Anne style house built in 1703, which once belonged to the mother of Captain Cook.She is a keen gardener. Westwood is vegetarian as well.