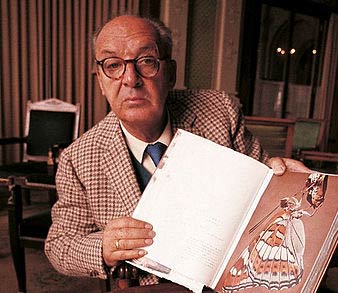 Vladimir Vladimirovich Nabokov ( 22 April [O.S. 10 April] 1899 – 2 July 1977), also known by the pen name Vladimir Sirin (Владимир Сирин), was a Russian-American novelist, poet, translator and entomologist. Born in Russia, he wrote his first nine novels in Russian (1926–38). After 15 years in Berlin, he achieved international prominence after moving to the United States, where he began writing in English and also taught in college. Nabokov became an American citizen in 1945. He and his wife returned to Europe, settling in Montreux, Switzerland in 1961.

Nabokov’s Lolita (1955) ranked fourth in the list of the Modern Library 100 Best Novels in 2007;[6] Pale Fire (1962) was ranked 53rd on the same list; and his memoir, Speak, Memory (1951), was listed eighth on publisher Random House’s list of the 20th century’s greatest nonfiction. He was a finalist for the National Book Award for Fiction seven times.

Nabokov was also an expert lepidopterist and composer of chess problems.

Nabokov was born on 22 April 1899 (10 April 1899 Old Style), in Saint Petersburg,to a wealthy and prominent family of the Russian nobility. His family traced its roots to the 14th-century Tatar prince Nabok Murza, who entered into the service of the Tsars, and from whom the family name is derived. His father was Vladimir Dmitrievich Nabokov (1870–1922), a liberal lawyer, statesman, and journalist, and his mother was the heiress Yelena Ivanovna née Rukavishnikova, the granddaughter of a millionaire gold-mine owner. His father was a leader of the pre-Revolutionary liberal Constitutional Democratic Party, and wrote numerous books and articles about criminal law and politics. His cousins included the composer Nicolas Nabokov. His paternal grandfather, Dmitry Nabokov (1827–1904), was Russia’s Justice Minister during the reign of Alexander II. His paternal grandmother was the Baltic German Baroness Maria von Korff (1842–1926). Through his father’s German ancestry, Nabokov was related to the composer Carl Heinrich Graun (1704–1759).

Vladimir was the family’s eldest and favorite child, with four younger siblings: Sergey (1900–45), Olga (1903–78), Elena (1906–2000), and Kirill (1912–64). Sergey was killed in a Nazi concentration camp in 1945 after publicly denouncing Hitler’s regime. Writer Ayn Rand recalled Olga (her close friend at Stoiunina Gymnasium) as a supporter of constitutional monarchy who first awakened Rand’s interest in politics. Elena, who in later years became Vladimir’s favorite sibling, published her correspondence with him in 1985. She was an important source for later biographers of Nabokov.

Nabokov spent his childhood and youth in Saint Petersburg and at the country estate Vyra near Siverskaya, south of the city. His childhood, which he called “perfect” and “cosmopolitan”, was remarkable in several ways. The family spoke Russian, English, and French in their household, and Nabokov was trilingual from an early age. He related that the first English book his mother read to him was Misunderstood (1869) by Florence Montgomery. Much to his patriotic father’s disappointment, Nabokov could read and write in English before he could in Russian. In his memoir Speak, Memory, Nabokov recalls numerous details of his privileged childhood. His ability to recall in vivid detail memories of his past was a boon to him during his permanent exile, providing a theme that runs from his first book Mary to later works such as Ada or Ardor: A Family Chronicle. While the family was nominally Orthodox, it had little religious fervor. Vladimir was not forced to attend church after he lost interest.

In 1916, Nabokov inherited the estate Rozhdestveno, next to Vyra, from his uncle Vasily Ivanovich Rukavishnikov (“Uncle Ruka” in Speak, Memory). He lost it in the October Revolution one year later; this was the only house he ever owned.

Nabokov’s adolescence was the period in which he made his first serious literary endeavors. In 1916, he published his first book, Stikhi (“Poems”), a collection of 68 Russian poems. At the time he was attending Tenishev school in Saint Petersburg, where his literature teacher Vladimir Vasilievich Gippius had criticized his literary accomplishments. Some time after the publication of Stikhi, Zinaida Gippius, renowned poet and first cousin of his teacher, told Nabokov’s father at a social event, “Please tell your son that he will never be a writer.”

After the 1917 February Revolution, Nabokov’s father became a secretary of the Russian Provisional Government in Saint Petersburg. After the October Revolution, the family was forced to flee the city for Crimea, at first not expecting to be away for very long. They lived at a friend’s estate and in September 1918 moved to Livadiya, at the time part of the Ukrainian Republic. Nabokov’s father became a minister of justice in the Crimean Regional Government.

After the withdrawal of the German Army in November 1918 and the defeat of the White Army (early 1919), the Nabokovs sought exile in western Europe, along with many other Russian refugees. They settled briefly in England, where Vladimir enrolled in Trinity College of the University of Cambridge, first studying zoology, then Slavic and Romance languages. His examination results on the first part of the Tripos, taken at the end of second year, were a starred first. He sat the second part of the exam in his fourth year, just after his father’s death. Nabokov feared he might fail the exam, but his script was marked second-class. His final examination result was second-class, and his BA conferred in 1922. Nabokov later drew on his Cambridge experiences to write several works, including the novels Glory and The Real Life of Sebastian Knight.

In 1920, Nabokov’s family moved to Berlin, where his father set up the émigré newspaper Rul’ (“Rudder”). Nabokov followed them to Berlin two years later, after completing his studies at Cambridge.

In March 1922, Nabokov’s father was fatally shot in Berlin by Russian monarchist Pyotr Shabelsky-Bork as he was trying to shield the real target, Pavel Milyukov, a leader of the Constitutional Democratic Party-in-exile. Nabokov featured this mistaken, violent death repeatedly in his fiction, where characters would meet their deaths under accidental terms. (On one interpretation of his novel Pale Fire, for example, an assassin mistakenly kills the poet John Shade when his actual target is a fugitive European monarch.) Shortly after his father’s death, Nabokov’s mother and sister moved to Prague.

Nabokov stayed in Berlin, where he had become a recognised poet and writer in Russian within the émigré community; he published under the nom de plume V. Sirin (a reference to the fabulous bird of Russian folklore). To supplement his scant writing income, he taught languages and gave tennis and boxing lessons. Of his 15 Berlin years, Dieter E. Zimmer has written: “He never became fond of Berlin, and at the end intensely disliked it. He lived within the lively Russian community of Berlin that was more or less self-sufficient, staying on after it had disintegrated because he had nowhere else to go to. He knew little German. He knew few Germans except for landladies, shopkeepers, and immigration officials at the police headquarters.”

In 1922, Nabokov became engaged to Svetlana Siewert; she broke off the engagement in early 1923, her parents worrying that he could not provide for her. In May 1923, he met Véra Evseyevna Slonim, a Russian-Jewish woman, at a charity ball in Berlin. They married in April 1925. Their only child, Dmitri, was born in 1934.

In 1936, Véra lost her job because of the increasingly anti-Semitic environment. That year the assassin of Nabokov’s father was appointed second-in-command of the Russian émigré group. In the same year, Nabokov began seeking a job in the English-speaking world. In 1937, he left Germany for France, where he had a short affair with Irina Guadanini, also a Russian émigrée. His family followed him to France, making en route their last visit to Prague, then spent time in Cannes, Menton, Cap d’Antibes, and Fréjus, finally settling in Paris. This city also had a Russian émigré community.

In May 1940, the Nabokovs fled the advancing German troops, reaching the United States via the SS Champlain. Nabokov’s brother Sergei did not leave France, and he died at the Neuengamme concentration camp on 9 January 1945.

The Nabokovs settled in Manhattan and Vladimir began volunteer work as an entomologist at the American Museum of Natural History.

Nabokov joined the staff of Wellesley College in 1941 as resident lecturer in comparative literature. The position, created specifically for him, provided an income and free time to write creatively and pursue his lepidoptery. Nabokov is remembered as the founder of Wellesley’s Russian Department. The Nabokovs resided in Wellesley, Massachusetts, during the 1941–42 academic year. In September 1942 they moved to Cambridge, where they lived until June 1948. Following a lecture tour through the United States, Nabokov returned to Wellesley for the 1944–45 academic year as a lecturer in Russian. In 1945, he became a naturalized citizen of the United States. He served through the 1947–48 term as Wellesley’s one-man Russian Department, offering courses in Russian language and literature. His classes were popular, due as much to his unique teaching style as to the wartime interest in all things Russian.[citation needed] At the same time he was the de facto curator of lepidoptery at Harvard University’s Museum of Comparative Zoology. After being encouraged by Morris Bishop, Nabokov left Wellesley in 1948 to teach Russian and European literature at Cornell University, where he taught until 1959. Among his students at Cornell was future U.S. Supreme Court Justice Ruth Bader Ginsburg, who later identified Nabokov as a major influence on her development as a writer.

Nabokov wrote Lolita while travelling on butterfly-collection trips in the western United States that he undertook every summer. Véra acted as “secretary, typist, editor, proofreader, translator and bibliographer; his agent, business manager, legal counsel and chauffeur; his research assistant, teaching assistant and professorial understudy”; when Nabokov attempted to burn unfinished drafts of Lolita, Véra stopped him. He called her the best-humored woman he had ever known.

In June 1953 Nabokov and his family went to Ashland, Oregon. There he finished Lolita and began writing the novel Pnin. He roamed the nearby mountains looking for butterflies, and wrote a poem called Lines Written in Oregon. On 1 October 1953, he and his family returned to Ithaca, New York, where he would later teach the young writer Thomas Pynchon. 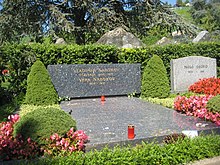 The grave of the Nabokovs at Cimetière de Clarens near Montreux, Switzerland

After the great financial success of Lolita, Nabokov returned to Europe and devoted himself to writing. His son obtained a position as an operatic bass at Reggio Emilia. On 1 October 1961, he and Véra moved to the Montreux Palace Hotel in Montreux, Switzerland; he stayed there until the end of his life. From his sixth-floor quarters he conducted his business and took tours to the Alps, Corsica, and Sicily to hunt butterflies. In 1976 he was hospitalized with a fever doctors were unable to diagnose. He was rehospitalized in Lausanne in 1977, suffering from severe bronchial congestion. He died on 2 July in Montreux surrounded by his family and, according to his son, Dmitri, “with a triple moan of descending pitch”. His remains were cremated and buried at the Clarens cemetery in Montreux.

At the time of his death, he was working on a novel titled The Original of Laura. Véra and Dmitri were entrusted with Nabokov’s literary executorship, and though he asked them to burn the manuscript, they chose not to. The incomplete manuscript, around 125 handwritten index cards long, remained in a Swiss bank vault, where only two people, Dmitri and an unknown person, had access. Portions of it were shown to Nabokov scholars. In April 2008, Dmitri announced that he would publish the novel.

Prior to the incomplete novel’s publication, several short excerpts of The Original of Laura were made public: German weekly Die Zeit reproduced some of Nabokov’s original index cards obtained by its reporter Malte Herwig in its 14 August 2008 issue. In the accompanying article Herwig concluded that Laura, although fragmentary, is “vintage Nabokov”.

In July 2009, Playboy magazine acquired the rights to print a 5,000-word excerpt of The Original of Laura. It was printed in the December issue.

The Original of Laura was published on 17 November 2009.