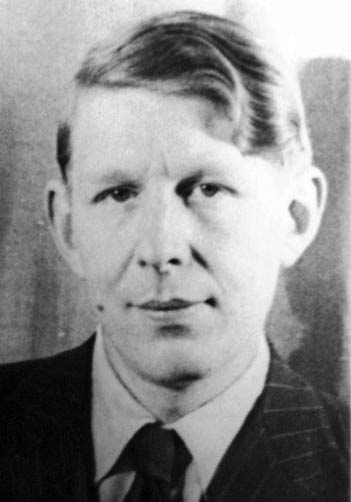 Spouse: Erika Mann (unconsummated marriage, 1935, to provide her with a British passport)

Wystan Hugh Auden (21 February 1907 – 29 September 1973) was an Anglo-American poet. Auden’s poetry was noted for its stylistic and technical achievement, its engagement with politics, morals, love, and religion, and its variety in tone, form, and content. Some of his best known poems are about love, such as “Funeral Blues”; on political and social themes, such as “September 1, 1939” and “The Shield of Achilles”; on cultural and psychological themes, such as The Age of Anxiety; and on religious themes such as “For the Time Being” and “Horae Canonicae”.

He was born in York and grew up in and near Birmingham in a professional middle-class family. He attended English independent (or public) schools and studied English at Christ Church, Oxford. After a few months in Berlin in 1928–29, he spent five years (1930–35) teaching in British private preparatory schools, then travelled to Iceland and China in order to write books about his journeys.

In 1939 he moved to the United States and became an American citizen in 1946, retaining his British citizenship. He taught from 1941 to 1945 in American universities, followed by occasional visiting professorships in the 1950s. From 1947 to 1957 he wintered in New York and summered in Ischia; from 1958 until the end of his life he wintered in New York (in Oxford in 1972–73) and summered in Kirchstetten, Lower Austria.

He came to wide public attention with his first book Poems at the age of twenty-three in 1930; it was followed in 1932 by The Orators. Three plays written in collaboration with Christopher Isherwood between 1935 and 1938 built his reputation as a left-wing political writer. Auden moved to the United States partly to escape this reputation, and his work in the 1940s, including the long poems “For the Time Being” and “The Sea and the Mirror”, focused on religious themes. He won the Pulitzer Prize for Poetry for his 1947 long poem The Age of Anxiety, the title of which became a popular phrase describing the modern era. From 1956 to 1961 he was Professor of Poetry at Oxford; his lectures were popular with students and faculty, and served as the basis for his 1962 prose collection The Dyer’s Hand.

Auden and Isherwood maintained a lasting but intermittent sexual friendship from around 1927 to 1939, while both had briefer but more intense relations with other men. In 1939, Auden fell in love with Chester Kallman and regarded their relationship as a marriage, but this ended in 1941 when Kallman refused to accept the faithful relations that Auden demanded. However, the two maintained their friendship, and from 1947 until Auden’s death they lived in the same house or apartment in a non-sexual relationship, often collaborating on opera libretti such as that of The Rake’s Progress, to music by Igor Stravinsky.

Auden was a prolific writer of prose essays and reviews on literary, political, psychological, and religious subjects, and he worked at various times on documentary films, poetic plays, and other forms of performance. Throughout his career he was both controversial and influential, and critical views on his work ranged from sharply dismissive—treating him as a lesser figure than W. B. Yeats and T. S. Eliot—to strongly affirmative, as in Joseph Brodsky’s statement that he had “the greatest mind of the twentieth century”. After his death, his poems became known to a much wider public than during his lifetime through films, broadcasts, and popular media.

Auden was born in York, Yorkshire, England, to George Augustus Auden (1872–1957), a physician, and Constance Rosalie Auden (née Bicknell; 1869–1941), who had trained (but never served) as a missionary nurse. He was the third of three sons; the eldest, George Bernard Auden (1900–1978), became a farmer, while the second, John Bicknell Auden (1903–1991), became a geologist. The Audens were minor gentry with a strong clerical tradition, originally of Rowley Regis, later of Horninglow, Staffordshire.

Auden, whose grandfathers were both Church of England clergymen, grew up in an Anglo-Catholic household that followed a “High” form of Anglicanism, with doctrine and ritual resembling those of Roman Catholicism. He traced his love of music and language partly to the church services of his childhood. He believed he was of Icelandic descent, and his lifelong fascination with Icelandic legends and Old Norse sagas is evident in his work.

His family moved to Homer Road in Solihull, near Birmingham, in 1908, where his father had been appointed the School Medical Officer and Lecturer (later Professor) of Public Health. Auden’s lifelong psychoanalytic interests began in his father’s library. From the age of eight he attended boarding schools, returning home for holidays. His visits to the Pennine landscape and its declining lead-mining industry figure in many of his poems; the remote decaying mining village of Rookhope was for him a “sacred landscape”, evoked in a late poem, “Amor Loci”. Until he was fifteen he expected to become a mining engineer, but his passion for words had already begun. He wrote later: “words so excite me that a pornographic story, for example, excites me sexually more than a living person can do.”

Auden attended St Edmund’s School, Hindhead, Surrey, where he met Christopher Isherwood, later famous in his own right as a novelist. At thirteen he went to Gresham’s School in Norfolk; there, in 1922, when his friend Robert Medley asked him if he wrote poetry, Auden first realised his vocation was to be a poet. Soon after, he “discover(ed) that he (had) lost his faith” (through a gradual realisation that he had lost interest in religion, not through any decisive change of views). In school productions of Shakespeare, he played Katherina in The Taming of the Shrew in 1922, and Caliban in The Tempest in 1925, his last year at Gresham’s. His first published poems appeared in the school magazine in 1923. Auden later wrote a chapter on Gresham’s for Graham Greene’s The Old School: Essays by Divers Hands (1934).

In 1925 he went up to Christ Church, Oxford, with a scholarship in biology; he switched to English by his second year, and was introduced to |Old English poetry through the lectures of J. R. R. Tolkien. Friends he met at Oxford include Cecil Day-Lewis, Louis MacNeice, and Stephen Spender; these four were commonly though misleadingly identified in the 1930s as the “Auden Group” for their shared (but not identical) left-wing views. Auden left Oxford in 1928 with a third-class degree.

Auden was reintroduced to Christopher Isherwood in 1925 by his fellow student A. S. T. Fisher. For the next few years Auden sent poems to Isherwood for comments and criticism; the two maintained a sexual friendship in intervals between their relations with others. In 1935–39 they collaborated on three plays and a travel book.

From his Oxford years onward, Auden’s friends uniformly described him as funny, extravagant, sympathetic, generous, and, partly by his own choice, lonely. In groups he was often dogmatic and overbearing in a comic way; in more private settings he was diffident and shy except when certain of his welcome. He was punctual in his habits, and obsessive about meeting deadlines, while choosing to live amidst physical disorder.

The following list includes only the books of poems and essays that Auden prepared during his lifetime; for a more complete list, including other works and posthumous editions, see W. H. Auden bibliography.

In the list below, works reprinted in the Complete Works of W. H. Auden are indicated by footnote references.