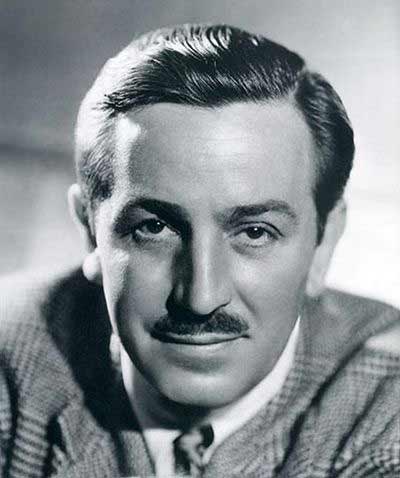 Walter Elias Disney (December 5, 1901 – December 15, 1966) was an American entrepreneur, animator, writer, voice actor and film producer. A pioneer of the American animation industry, he introduced several developments in the production of cartoons. As a film producer, Disney holds the record for most Academy Awards earned by an individual, having won 22 Oscars from 59 nominations. He was presented with two Golden Globe Special Achievement Awards and an Emmy Award, among other honors. Several of his films are included in the National Film Registry by the Library of Congress.

Born in Chicago in 1901, Disney developed an early interest in drawing. He took art classes as a boy and got a job as a commercial illustrator at the age of 18. He moved to California in the early 1920s and set up the Disney Brothers Studio with his brother Roy. With Ub Iwerks, Walt developed the character Mickey Mouse in 1928, his first highly popular success; he also provided the voice for his creation in the early years. As the studio grew, Disney became more adventurous, introducing synchronized sound, full-color three-strip Technicolor, feature-length cartoons and technical developments in cameras. The results, seen in features such as Snow White and the Seven Dwarfs (1937), Pinocchio, Fantasia (both 1940), Dumbo (1941), and Bambi (1942), furthered the development of animated film. New animated and live-action films followed after World War II, including the critically successful Cinderella (1950) and Mary Poppins (1964), the latter of which received five Academy Awards.

In the 1950s, Disney expanded into the amusement park industry, and in 1955 he opened Disneyland in Anaheim, California. To fund the project he diversified into television programs, such as Walt Disney’s Disneyland and The Mickey Mouse Club; he was also involved in planning the 1959 Moscow Fair, the 1960 Winter Olympics, and the 1964 New York World’s Fair. In 1965, he began development of another theme park, Disney World, the heart of which was to be a new type of city, the “Experimental Prototype Community of Tomorrow” (EPCOT). Disney was a heavy smoker throughout his life and died of lung cancer in December 1966 before either the park or the EPCOT project were completed.

Disney was a shy, self-deprecating and insecure man in private but adopted a warm and outgoing public persona. He had high standards and high expectations of those with whom he worked. Although there have been accusations that he was racist or anti-Semitic, they have been contradicted by many who knew him. His reputation changed in the years after his death, from a purveyor of homely patriotic values to a representative of American imperialism. He nevertheless remains an important figure in the history of animation and in the cultural history of the United States, where he is considered a national cultural icon. His film work continues to be shown and adapted; his namesake studio and company maintains high standards in its production of popular entertainment, and the Disney amusement parks have grown in size and number to attract visitors in several countries.

Walt Disney was born on December 5, 1901, at 1249 Tripp Avenue, in Chicago’s Hermosa neighborhood. He was the fourth son of Elias Disney‍—‌born in the Province of Canada, to Irish parents‍—‌and Flora (née Call), an American of German and English descent. Aside from Disney, Elias and Flora’s sons were Herbert, Raymond and Roy; the couple had a fifth child, Ruth, in December 1903. In 1906, when Disney was four, the family moved to a farm in Marceline, Missouri, where his uncle Robert had just purchased land. In Marceline, Disney developed his interest in drawing when he was paid to draw the horse of a retired neighborhood doctor. Elias was a subscriber to the Appeal to Reason newspaper, and Disney practiced drawing by copying the front-page cartoons of Ryan Walker. Disney also began to develop an ability to work with watercolors and crayons. He lived near the Atchison, Topeka and Santa Fe Railway line and became enamored with trains. He and his younger sister Ruth started school at the same time at the Park School in Marceline in late 1909.

In 1911, the Disneys moved to Kansas City, Missouri. There, Disney attended the Benton Grammar School, where he met fellow-student Walter Pfeiffer, who came from a family of theatre fans and introduced Disney to the world of vaudeville and motion pictures. Before long, he was spending more time at the Pfeiffers’ house than at home. Elias had purchased a newspaper delivery route for The Kansas City Star and Kansas City Times. Disney and his brother Roy woke up at 4:30 every morning to deliver the Times before school and repeated the round for the evening Star after school. The schedule was exhausting, and Disney often received poor grades after falling asleep in class, but he continued his paper route for more than six years. He attended Saturday courses at the Kansas City Art Institute and also took a correspondence course in cartooning.

In 1917, Elias bought stock in a Chicago jelly producer, the O-Zell Company, and moved back to the city with his family. Disney enrolled at McKinley High School and became the cartoonist of the school newspaper, drawing patriotic pictures about World War I; he also took night courses at the Chicago Academy of Fine Arts. In mid-1918, Disney attempted to join the United States Army to fight against the Germans, but he was rejected for being too young. After forging the date of birth on his birth certificate, he joined the Red Cross in September 1918 as an ambulance driver. He was shipped to France but arrived in November, after the armistice. He drew cartoons on the side of his ambulance for decoration and had some of his work published in the army newspaper Stars and Stripes. Disney returned to Kansas City in October 1919, where he worked as an apprentice artist at the Pesmen-Rubin Commercial Art Studio. There, he drew commercial illustrations for advertising, theater programs and catalogs. He also befriended fellow artist Ub Iwerks.

Disney had been a heavy smoker since World War I. He did not use cigarettes with filters and had smoked a pipe as a young man. In November 1966, he was diagnosed with lung cancer and was treated with cobalt therapy. On November 30 he felt unwell and was taken to St. Joseph Hospital where, on December 15, ten days after his 65th birthday, he died of circulatory collapse caused by lung cancer. Disney’s remains were cremated two days later and his ashes interred at the Forest Lawn Memorial Park in Glendale, California.

The release of The Jungle Book and The Happiest Millionaire in 1967 raised the total number of feature films that Disney had been involved in to 81. When Winnie the Pooh and the Blustery Day was released in 1968, it earned Disney an Academy Award in the Short Subject (Cartoon) category, awarded posthumously. After Disney’s death, his studios continued to produce live-action films prolifically but largely abandoned animation until the late 1980s, after which there was what The New York Times describes as the “Disney Renaissance” that began with The Little Mermaid (1989). Disney’s companies continue to produce successful film, television and stage entertainment.

Disney’s plans for the futuristic city of EPCOT did not come to fruition. After Disney’s death, his brother Roy deferred his retirement to take full control of the Disney companies. He changed the focus of the project from a town to an attraction. At the inauguration in 1971, Roy dedicated Walt Disney World to his brother. Walt Disney World expanded with the opening of Epcot Center in 1982; Walt Disney’s vision of a functional city was replaced by a park more akin to a permanent world’s fair. In 2009, the Walt Disney Family Museum, designed by Disney’s daughter Diane and her son Walter E. D. Miller, opened in the Presidio of San Francisco. Thousands of artifacts from Disney’s life and career are on display, including numerous awards that he received. In 2014, the Disney theme parks around the world hosted approximately 134 million visitors.

Disney has been portrayed numerous times in fictional works. H. G. Wells references Disney in his 1938 novel The Holy Terror, in which World Dictator Rud fears that Donald Duck is meant to lampoon the dictator. Disney was portrayed by Len Cariou in the 1995 made-for-TV film A Dream Is a Wish Your Heart Makes: The Annette Funicello Story, and by Tom Hanks in the 2013 film Saving Mr. Banks. In 2001, the German author Peter Stephan Jungk published Der König von Amerika (trans: The King of America), a fictional work of Disney’s later years that re-imagines him as a power-hungry racist. The composer Philip Glass later adapted the book into the opera The Perfect American (2013).