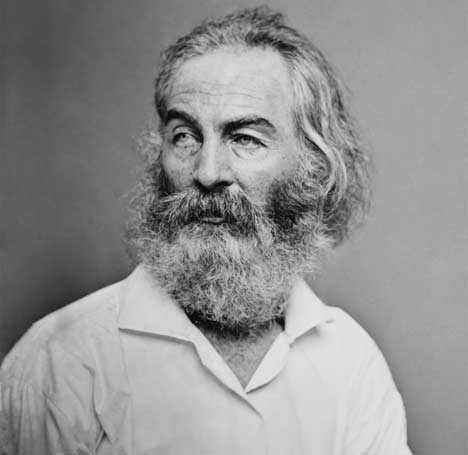 Poems: Song of Myself, Leaves of Grass

Walt Whitman (May 31, 1819 – March 26, 1892) was an American poet, essayist, and journalist. A humanist, he was a part of the transition between transcendentalism and realism, incorporating both views in his works. Whitman is among the most influential poets in the American canon, often called the father of free verse. His work was controversial in its time, particularly his poetry collection Leaves of Grass, which was described as obscene for its overt sensuality. Whitman’s own life came under scrutiny for his presumed homosexuality.

Born in Huntington on Long Island, as a child and through much of his career he resided in Brooklyn. At age 11, he left formal schooling to go to work. Later, Whitman worked as a journalist, a teacher, and a government clerk. Whitman’s major poetry collection, Leaves of Grass, was first published in 1855 with his own money and became well known. The work was an attempt at reaching out to the common person with an American epic. He continued expanding and revising it until his death in 1892. During the American Civil War, he went to Washington, D.C. and worked in hospitals caring for the wounded. His poetry often focused on both loss and healing. Two of his well known poems, “O Captain! My Captain!” and “When Lilacs Last in the Dooryard Bloom’d”, were written on the death of Abraham Lincoln. After a stroke towards the end of his life, Whitman moved to Camden, New Jersey, where his health further declined. When he died at age 72, his funeral was a public event.

Whitman’s influence on poetry remains strong. Mary Smith Whitall Costelloe argued: “You cannot really understand America without Walt Whitman, without Leaves of Grass … He has expressed that civilization, ‘up to date,’ as he would say, and no student of the philosophy of history can do without him.” Modernist poet Ezra Pound called Whitman “America’s poet … He is America.”

Walter Whitman was born on May 31, 1819, in West Hills, Town of Huntington, Long Island, to parents with interests in Quaker thought, Walter (1789–1855) and Louisa Van Velsor Whitman (1795–1873). The second of nine children, he was immediately nicknamed “Walt” to distinguish him from his father. Walter Whitman Sr. named three of his seven sons after American leaders: Andrew Jackson, George Washington, and Thomas Jefferson. The oldest was named Jesse and another boy died unnamed at the age of six months. The couple’s sixth son, the youngest, was named Edward. At age four, Whitman moved with his family from West Hills to Brooklyn, living in a series of homes, in part due to bad investments. Whitman looked back on his childhood as generally restless and unhappy, given his family’s difficult economic status. One happy moment that he later recalled was when he was lifted in the air and kissed on the cheek by the Marquis de Lafayette during a celebration in Brooklyn on July 4, 1825.

At age eleven Whitman concluded formal schooling. He then sought employment for further income for his family; he was an office boy for two lawyers and later was an apprentice and printer’s devil for the weekly Long Island newspaper the Patriot, edited by Samuel E. Clements. There, Whitman learned about the printing press and typesetting. He may have written “sentimental bits” of filler material for occasional issues. Clements aroused controversy when he and two friends attempted to dig up the corpse of the Quaker minister Elias Hicks to create a plaster mold of his head. Clements left the Patriot shortly afterward, possibly as a result of the controversy.

The following summer Whitman worked for another printer, Erastus Worthington, in Brooklyn. His family moved back to West Hills in the spring, but Whitman remained and took a job at the shop of Alden Spooner, editor of the leading Whig weekly newspaper the Long-Island Star. While at the Star, Whitman became a regular patron of the local library, joined a town debating society, began attending theater performances, and anonymously published some of his earliest poetry in the New-York Mirror. At age 16 in May 1835, Whitman left the Star and Brooklyn. He moved to New York City to work as a compositor though, in later years, Whitman could not remember where. He attempted to find further work but had difficulty, in part due to a severe fire in the printing and publishing district, and in part due to a general collapse in the economy leading up to the Panic of 1837. In May 1836, he rejoined his family, now living in Hempstead, Long Island. Whitman taught intermittently at various schools until the spring of 1838, though he was not satisfied as a teacher.

After his teaching attempts, Whitman went back to Huntington, New York, to found his own newspaper, the Long-Islander. Whitman served as publisher, editor, pressman, and distributor and even provided home delivery. After ten months, he sold the publication to E. O. Crowell, whose first issue appeared on July 12, 1839. There are no known surviving copies of the Long-Islander published under Whitman. By the summer of 1839, he found a job as a typesetter in Jamaica, Queens with the Long Island Democrat, edited by James J. Brenton. He left shortly thereafter, and made another attempt at teaching from the winter of 1840 to the spring of 1841. One story, possibly apocryphal, tells of Whitman’s being chased away from a teaching job in Southold, New York, in 1840. After a local preacher called him a “Sodomite”, Whitman was allegedly tarred and feathered. Biographer Justin Kaplan notes that the story is likely untrue, because Whitman regularly vacationed in the town thereafter. Biographer Jerome Loving calls the incident a “myth”. During this time, Whitman published a series of ten editorials, called “Sun-Down Papers—From the Desk of a Schoolmaster”, in three newspapers between the winter of 1840 and July 1841. In these essays, he adopted a constructed persona, a technique he would employ throughout his career.

Whitman moved to New York City in May, initially working a low-level job at the New World, working under Park Benjamin Sr. and Rufus Wilmot Griswold. He continued working for short periods of time for various newspapers; in 1842 he was editor of the Aurora and from 1846 to 1848 he was editor of the Brooklyn Eagle. While working for the latter institution, many of his publications were in the area of music criticism, and it is during this time that he became a devoted lover of Italian opera through reviewing performances of works by Bellini, Donizetti, and Verdi. This new interest had an impact on his writing in free verse. He later said, “But for the opera, I could never have written Leaves of Grass”.

Throughout the 1840s he contributed freelance fiction and poetry to various periodicals, including Brother Jonathan magazine edited by John Neal. Whitman lost his position at the Brooklyn Eagle in 1848 after siding with the free-soil “Barnburner” wing of the Democratic party against the newspaper’s owner, Isaac Van Anden, who belonged to the conservative, or “Hunker”, wing of the party. Whitman was a delegate to the 1848 founding convention of the Free Soil Party, which was concerned about the threat slavery would pose to free white labor and northern businessmen moving into the newly colonised western territories. Abolitionist William Lloyd Garrison derided the party philosophy as “white manism”.

In 1852, he serialized a novel titled Life and Adventures of Jack Engle: An Auto-Biography: A Story of New York at the Present Time in which the Reader Will Find Some Familiar Characters in six installments of New York’s The Sunday Dispatch. In 1858, Whitman published a 47,000 word series called Manly Health and Training under the pen name Mose Velsor. Apparently he drew the name Velsor from Van Velsor, his mother’s family name. This self-help guide recommends beards, nude sunbathing, comfortable shoes, bathing daily in cold water, eating meat almost exclusively, plenty of fresh air, and getting up early each morning. Present-day writers have called Manly Health and Training “quirky”, “so over the top”, “a pseudoscientific tract”, and “wacky”.

After suffering a paralytic stroke in early 1873, Whitman was induced to move from Washington to the home of his brother—George Washington Whitman, an engineer—at 431 Stevens Street in Camden, New Jersey. His mother, having fallen ill, was also there and died that same year in May. Both events were difficult for Whitman and left him depressed. He remained at his brother’s home until buying his own in 1884. However, before purchasing his home, he spent the greatest period of his residence in Camden at his brother’s home in Stevens Street. While in residence there he was very productive, publishing three versions of Leaves of Grass among other works. He was also last fully physically active in this house, receiving both Oscar Wilde and Thomas Eakins. His other brother, Edward, an “invalid” since birth, lived in the house.

When his brother and sister-in-law were forced to move for business reasons, he bought his own house at 328 Mickle Street (now 330 Dr. Martin Luther King Jr. Boulevard). First taken care of by tenants, he was completely bedridden for most of his time in Mickle Street. During this time, he began socializing with Mary Oakes Davis—the widow of a sea captain. She was a neighbor, boarding with a family in Bridge Avenue just a few blocks from Mickle Street. She moved in with Whitman on February 24, 1885, to serve as his housekeeper in exchange for free rent. She brought with her a cat, a dog, two turtledoves, a canary, and other assorted animals. During this time, Whitman produced further editions of Leaves of Grass in 1876, 1881, and 1889.

While in Southern New Jersey, Whitman spent a good portion of his time in the then quite pastoral community of Laurel Springs, between 1876 and 1884, converting one of the Stafford Farm buildings to his summer home. The restored summer home has been preserved as a museum by the local historical society. Part of his Leaves of Grass was written here, and in his Specimen Days he wrote of the spring, creek and lake. To him, Laurel Lake was “the prettiest lake in: either America or Europe”.

As the end of 1891 approached, he prepared a final edition of Leaves of Grass, a version that has been nicknamed the “Deathbed Edition”. He wrote, “L. of G. at last complete—after 33 y’rs of hackling at it, all times & moods of my life, fair weather & foul, all parts of the land, and peace & war, young & old.” Preparing for death, Whitman commissioned a granite mausoleum shaped like a house for $4,000 and visited it often during construction. In the last week of his life, he was too weak to lift a knife or fork and wrote: “I suffer all the time: I have no relief, no escape: it is monotony—monotony—monotony—in pain.”