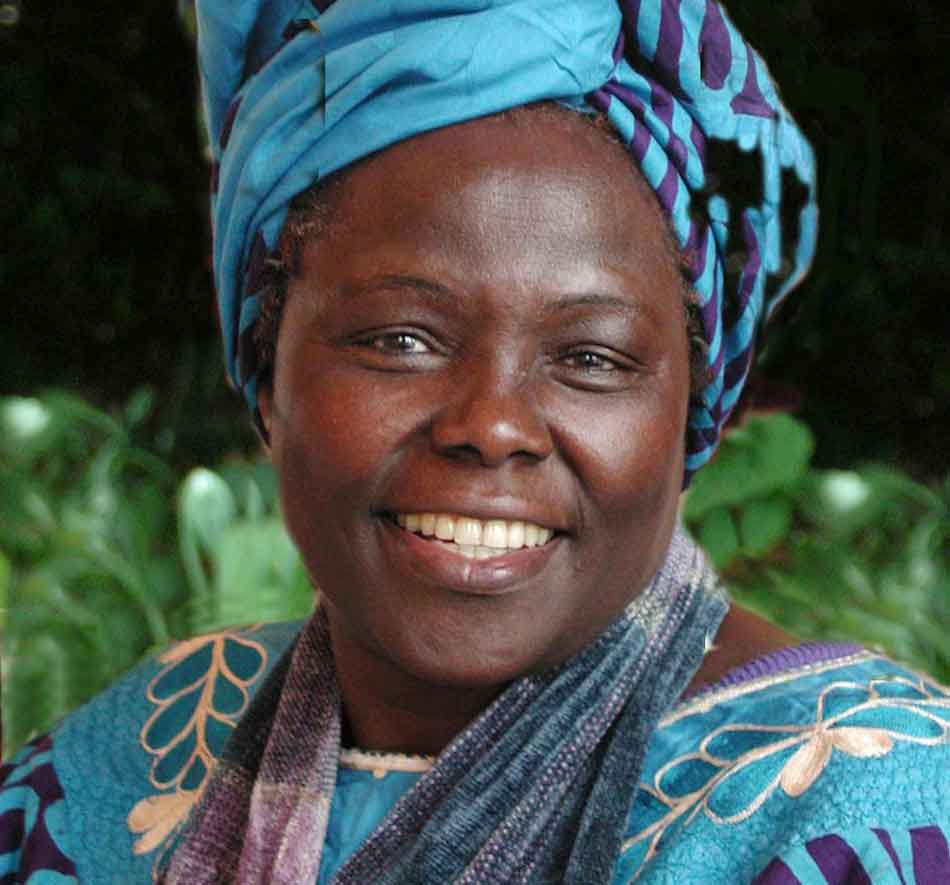 Wangarĩ Muta Maathai (1 April 1940 – 25 September 2011) was a renowned Kenyan social, environmental and political activist and the first African woman to win the Nobel Prize. She earned a Bachelor’s Degree in the United States at Mount St. Scholastica (Benedictine College), her Master’s Degree at the University of Pittsburgh, and went on to become the first woman in East and Central Africa to earn a PhD, at the University of Nairobi in Kenya.

In 1977, Maathai founded the Green Belt Movement, an environmental non-governmental organization focused on the planting of trees, environmental conservation, and women’s rights. In 1984, she was awarded the Right Livelihood Award for “converting the Kenyan ecological debate into mass action for reforestation.” Maathai was an elected member of Parliament and served as assistant minister for Environment and Natural resources in the government of President Mwai Kibaki between January 2003 and November 2005. She was an Honorary Councillor of the World Future Council. She was affiliated to professional bodies and received several awards. On Sunday, 25 September 2011, Maathai died of complications from ovarian cancer.

Maathai was born on 1 April 1940 in the village of Ihithe, Nyeri District, in the central highlands of the colony of Kenya. Her family was Kikuyu, the most populous ethnic group in Kenya, and had lived in the area for several generations. Around 1943, Maathai’s family relocated to a White-owned farm in the Rift Valley, near the town of Nakuru, where her father had found work. Late in 1947, she returned to Ihithe with her mother, as two of her brothers were attending primary school in the village, and there was no schooling available on the farm where her father worked. Her father remained at the farm. Shortly afterward, at the age of eight, she joined her brothers at Ihithe Primary School.

At the age of 11, Maathai moved to St. Cecilia’s Intermediate Primary School, a boarding school at the Mathari Catholic Mission in Nyeri. Maathai studied at St. Cecilia’s for four years. During this time, she became fluent in English and converted to Catholicism. She was involved with the Legion of Mary, whose members attempted “to serve God by serving fellow human beings.” Studying at St. Cecilia’s, she was sheltered from the ongoing Mau Mau uprising, which forced her mother to move from their homestead to an emergency village in Ihithe. When she completed her studies there in 1956, she was rated first in her class, and was granted admission to the only Catholic high school for girls in Kenya, Loreto High School in Limuru.

As the end of East African colonialism approached, Kenyan politicians, such as Tom Mboya, were proposing ways to make education in Western nations available to promising students. John F. Kennedy, then a United States Senator, agreed to fund such a program through the Joseph P. Kennedy Jr. Foundation, initiating what became known as the Kennedy Airlift or Airlift Africa. Maathai became one of some 300 Kenyans selected to study in the United States in September 1960.

She received a scholarship to study at Mount St. Scholastica College (now Benedictine College), in Atchison, Kansas, where she majored in biology, with minors in chemistry and German. After receiving her bachelor of science degree in 1964, she studied at the University of Pittsburgh for a master’s degree in biology. Her graduate studies there were funded by the Africa-America Institute, and during her time in Pittsburgh, she first experienced environmental restoration, when local environmentalists pushed to rid the city of air pollution. In January 1966, Maathai received her MSc in biological sciences, and was appointed to a position as research assistant to a professor of zoology at University College of Nairobi.

Upon returning to Kenya, Maathai dropped her forename, preferring to be known by her birth name, Wangarĩ Muta. When she arrived at the university to start her new job, she was informed that it had been given to someone else. Maathai believed this was because of gender and tribal bias. After a two-month job search, Professor Reinhold Hofmann, from the University of Giessen in Germany, offered her a job as a research assistant in the microanatomy section of the newly established Department of Veterinary Anatomy in the School of Veterinary Medicine at University College of Nairobi. In April 1966, she met Mwangi Mathai, another Kenyan who had studied in America, who would later become her husband. She also rented a small shop in the city, and established a general store, at which her sisters worked. In 1967, at the urging of Professor Hofmann, she travelled to the University of Giessen in Germany in pursuit of a doctorate. She studied both at Giessen and the University of Munich.

In the spring of 1969, she returned to Nairobi to continue studies at the University College of Nairobi as an assistant lecturer. In May, she and Mwangi Mathai married. Later that year, she became pregnant with her first child, and her husband campaigned for a seat in Parliament, narrowly losing. During the course of the election, Tom Mboya, who had been instrumental in founding the program which sent her overseas, was assassinated. This led to President Kenyatta effectually ending multi-party democracy in Kenya. Shortly after, her first son, Waweru, was born. In 1971, she became the first Eastern African woman to receive a PhD, her doctorate in veterinary anatomy, from the University College of Nairobi, which became the University of Nairobi the following year. She completed her dissertation on the development and differentiation of gonads in bovines. Her daughter, Wanjira, was born in December 1971.

On 28 March 2005, Maathai was elected the first president of the African Union’s Economic, Social and Cultural Council and was appointed a goodwill ambassador for an initiative aimed at protecting the Congo Basin Forest Ecosystem. In 2006, she was one of the eight flag-bearers at the 2006 Winter Olympics Opening Ceremony. Also on 21 May 2006, she was awarded an honorary doctorate by and gave the commencement address at Connecticut College. She supported the International Year of Deserts and Desertification program. In November 2006, she spearheaded the United Nations Billion Tree Campaign. Maathai was one of the founders of the Nobel Women’s Initiative along with sister Nobel Peace laureates Jody Williams, Shirin Ebadi, Rigoberta Menchú Tum, Betty Williams and Mairead Corrigan Maguire. Six women representing North America and South America, Europe, the Middle East and Africa decided to bring together their experiences in a united effort for peace with justice and equality. It is the goal of the Nobel Women’s Initiative to help strengthen work being done in support of women’s rights around the world.

In August 2006, then United States Senator Barack Obama traveled to Kenya. His father was educated in America through the same program as Maathai. She and the Senator met and planted a tree together in Uhuru Park in Nairobi. Obama called for freedom of the press to be respected, saying, “Press freedom is like tending a garden; it continually has to be nurtured and cultivated. The citizenry has to value it because it’s one of those things that can slip away if we’re not vigilant.” He deplored global ecological losses, singling out President George W. Bush’s refusal to join the United Nations Framework Convention on Climate Change (UNFCCC) and its subsidiary, the Kyoto Protocol.

Maathai was defeated in the Party of National Unity’s primary elections for its parliamentary candidates in November 2007 and chose to instead run as the candidate of a smaller party. She was defeated in the December 2007 parliamentary election. She called for a recount of votes in the presidential election (officially won by Mwai Kibaki, but disputed by the opposition) in her constituency, saying that both sides should feel the outcome was fair and that there were indications of fraud.

In June 2009, Maathai was named as one of PeaceByPeace.com’s first peace heroes. Until her death in 2011, Maathai served on the Eminent Advisory Board of the Association of European Parliamentarians with Africa (AWEPA).

Wangarĩ Maathai died on 25 September 2011 of complications arising from ovarian cancer while receiving treatment at a Nairobi hospital.

She is buried at the Wangari Maathai Institute for Peace and Environmental Studies in Nairobi.