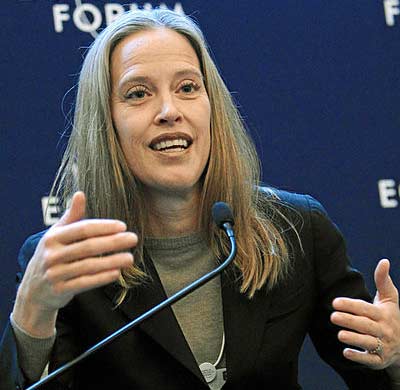 Wendy Sue Kopp (born June 29, 1967) is the CEO and Co-Founder of Teach For All, a global network of independent nonprofit organizations working to expand educational opportunity in their own countries and the Founder of Teach For America (TFA), a national teaching corps.
Wendy Kopp is married to Richard Barth, president of the KIPP Foundation. They have four children and live in Manhattan.

Wendy Kopp attended Highland Park High School in Dallas, Texas and later was an undergraduate in the Woodrow Wilson School of Public and International Affairs at Princeton University. She received her Bachelor of Arts degree from Princeton in 1989 and was a member of Princeton’s Business Today and the University Press Club.

In 1989, Kopp proposed the creation of Teach For America in her 177-page long senior thesis titled “An Argument and Plan for the Creation of the Teachers Corps” which she completed under the supervision of Marvin Bressler. She was convinced that many in her generation were searching for a way to assume a significant responsibility that would make a real difference in the world and that top college students would choose teaching over more lucrative opportunities if a prominent teacher corps existed.

In 2007, Kopp founded Teach For All, a global network of independent nonprofit organizations that apply the same model as Teach For America in other countries.

Kopp chronicled her experiences at Teach For America in two books, One Day, All Children: The Unlikely Triumph of Teach For America and What I Learned Along the Way and A Chance To Make History: What Works and What Doesn’t in Providing an Excellent Education For All.