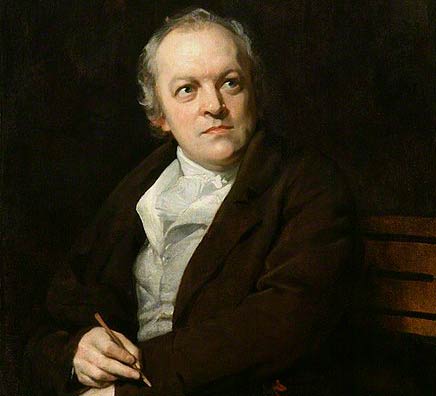 William Blake (28 November 1757 – 12 August 1827) was an English poet, painter, and printmaker. Largely unrecognised during his lifetime, Blake is now considered a seminal figure in the history of the poetry and visual arts of the Romantic Age. What he called his prophetic works were said by 20th-century critic Northrop Frye to form “what is in proportion to its merits the least read body of poetry in the English language”. His visual artistry led 21st-century critic Jonathan Jones to proclaim him “far and away the greatest artist Britain has ever produced”. In 2002, Blake was placed at number 38 in the BBC’s poll of the 100 Greatest Britons. While he lived in London his entire life, except for three years spent in Felpham, he produced a diverse and symbolically rich œuvre, which embraced the imagination as “the body of God” or “human existence itself”.

Although Blake was considered mad by contemporaries for his idiosyncratic views, he is held in high regard by later critics for his expressiveness and creativity, and for the philosophical and mystical undercurrents within his work. His paintings and poetry have been characterised as part of the Romantic movement and as “Pre-Romantic”.[8] A committed Christian who was hostile to the Church of England (indeed, to almost all forms of organised religion), Blake was influenced by the ideals and ambitions of the French and American Revolutions. Though later he rejected many of these political beliefs, he maintained an amiable relationship with the political activist Thomas Paine; he was also influenced by thinkers such as Emanuel Swedenborg. Despite these known influences, the singularity of Blake’s work makes him difficult to classify. The 19th-century scholar William Michael Rossetti characterised him as a “glorious luminary”, and “a man not forestalled by predecessors, nor to be classed with contemporaries, nor to be replaced by known or readily surmisable successors”.

William Blake was born on 28 November 1757 at 28 Broad Street (now Broadwick St.) in Soho, London. He was the third of seven children, two of whom died in infancy. Blake’s father, James, was a hosier. He attended school only long enough to learn reading and writing, leaving at the age of ten, and was otherwise educated at home by his mother Catherine Blake (née Wright). Even though the Blakes were English Dissenters, William was baptised on 11 December at St James’s Church, Piccadilly, London. The Bible was an early and profound influence on Blake, and remained a source of inspiration throughout his life.

Blake started engraving copies of drawings of Greek antiquities purchased for him by his father, a practice that was preferred to actual drawing. Within these drawings Blake found his first exposure to classical forms through the work of Raphael, Michelangelo, Maarten van Heemskerck and Albrecht Dürer. The number of prints and bound books that James and Catherine were able to purchase for young William suggests that the Blakes enjoyed, at least for a time, a comfortable wealth. When William was ten years old, his parents knew enough of his headstrong temperament that he was not sent to school but instead enrolled in drawing classes at Pars’s drawing school in the Strand. He read avidly on subjects of his own choosing. During this period, Blake made explorations into poetry; his early work displays knowledge of Ben Jonson, Edmund Spenser, and the Psalms.

Blake met Catherine Boucher in 1782 when he was recovering from a relationship that had culminated in a refusal of his marriage proposal. He recounted the story of his heartbreak for Catherine and her parents, after which he asked Catherine, “Do you pity me?” When she responded affirmatively, he declared, “Then I love you.” Blake married Catherine – who was five years his junior – on 18 August 1782 in St Mary’s Church, Battersea. Illiterate, Catherine signed her wedding contract with an X. The original wedding certificate may be viewed at the church, where a commemorative stained-glass window was installed between 1976 and 1982. Later, in addition to teaching Catherine to read and write, Blake trained her as an engraver. Throughout his life she proved an invaluable aid, helping to print his illuminated works and maintaining his spirits throughout numerous misfortunes.

Blake’s first collection of poems, Poetical Sketches, was printed around 1783. After his father’s death, Blake and former fellow apprentice James Parker opened a print shop in 1784, and began working with radical publisher Joseph Johnson. Johnson’s house was a meeting-place for some leading English intellectual dissidents of the time: theologian and scientist Joseph Priestley, philosopher Richard Price, artist John Henry Fuseli, early feminist Mary Wollstonecraft and English revolutionary Thomas Paine. Along with William Wordsworth and William Godwin, Blake had great hopes for the French and American revolutions and wore a Phrygian cap in solidarity with the French revolutionaries, but despaired with the rise of Robespierre and the Reign of Terror in France. In 1784 Blake composed his unfinished manuscript An Island in the Moon.

Blake illustrated Original Stories from Real Life (2nd edition, 1791) by Mary Wollstonecraft. They seem to have shared some views on sexual equality and the institution of marriage, but there is no evidence proving that they met. In 1793’s Visions of the Daughters of Albion, Blake condemned the cruel absurdity of enforced chastity and marriage without love and defended the right of women to complete self-fulfilment.

From 1790 to 1800, William Blake lived in North Lambeth, London, at 13 Hercules Buildings, Hercules Road. The property was demolished in 1918, but the site is now marked with a plaque. There is a series of 70 mosaics commemorating Blake in the nearby railway tunnels of Waterloo Station. [37] The mosaics largely reproduce illustrations from Blake’s illuminated books, The Songs of Innocence and of Experience, The Marriage of Heaven and Hell, and the prophetic books.

Blake’s last years were spent at Fountain Court off the Strand (the property was demolished in the 1880s, when the Savoy Hotel was built). On the day of his death (12 August 1827), Blake worked relentlessly on his Dante series. Eventually, it is reported, he ceased working and turned to his wife, who was in tears by his bedside. Beholding her, Blake is said to have cried, “Stay Kate! Keep just as you are – I will draw your portrait – for you have ever been an angel to me.” Having completed this portrait (now lost), Blake laid down his tools and began to sing hymns and verses. At six that evening, after promising his wife that he would be with her always, Blake died. Gilchrist reports that a female lodger in the house, present at his expiration, said, “I have been at the death, not of a man, but of a blessed angel.”

George Richmond gives the following account of Blake’s death in a letter to Samuel Palmer:

He died … in a most glorious manner. He said He was going to that Country he had all His life wished to see & expressed Himself Happy, hoping for Salvation through Jesus Christ – Just before he died His Countenance became fair. His eyes Brighten’d and he burst out Singing of the things he saw in Heaven.

The works with * constitute the prophetic books.