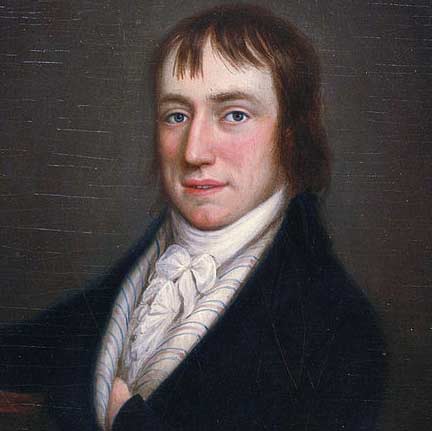 William Wordsworth (7 April 1770 – 23 April 1850) was an English Romantic poet who, with Samuel Taylor Coleridge, helped to launch the Romantic Age in English literature with their joint publication Lyrical Ballads (1798).

Wordsworth’s magnum opus is generally considered to be The Prelude, a semi-autobiographical poem of his early years that he revised and expanded a number of times. It was posthumously titled and published by his wife in the year of his death, before which it was generally known as “the poem to Coleridge”.

Wordsworth was Poet Laureate from 1843 until his death from pleurisy on 23 April 1850.

The second of five children born to John Wordsworth and Ann Cookson, William Wordsworth was born on 7 April 1770 in what is now named Wordsworth House in Cockermouth, Cumberland, part of the scenic region in northwestern England known as the Lake District. William’s sister, the poet and diarist Dorothy Wordsworth, to whom he was close all his life, was born the following year, and the two were baptised together. They had three other siblings: Richard, the eldest, who became a lawyer; John, born after Dorothy, who went to sea and died in 1805 when the ship of which he was captain, the Earl of Abergavenny, was wrecked off the south coast of England; and Christopher, the youngest, who entered the Church and rose to be Master of Trinity College, Cambridge.

Wordsworth’s father was a legal representative of James Lowther, 1st Earl of Lonsdale and, through his connections, lived in a large mansion in the small town. He was frequently away from home on business, so the young William and his siblings had little involvement with him and remained distant from him until his death in 1783. However, he did encourage William in his reading, and in particular set him to commit large portions of verse to memory, including works by Milton, Shakespeare and Spenser. William was also allowed to use his father’s library. William also spent time at his mother’s parents’ house in Penrith, Cumberland, where he was exposed to the moors, but did not get along with his grandparents or his uncle, who also lived there. His hostile interactions with them distressed him to the point of contemplating suicide.

Wordsworth was taught to read by his mother and attended, first, a tiny school of low quality in Cockermouth, then a school in Penrith for the children of upper-class families, where he was taught by Ann Birkett, who insisted on instilling in her students traditions that included pursuing both scholarly and local activities, especially the festivals around Easter, May Day and Shrove Tuesday. Wordsworth was taught both the Bible and the Spectator, but little else. It was at the school in Penrith that he met the Hutchinsons, including Mary, who later became his wife.

After the death of Wordsworth’s mother, in 1778, his father sent him to Hawkshead Grammar School in Lancashire (now in Cumbria) and sent Dorothy to live with relatives in Yorkshire. She and William did not meet again for another nine years.

Wordsworth made his debut as a writer in 1787 when he published a sonnet in The European Magazine. That same year he began attending St John’s College, Cambridge. He received his BA degree in 1791. He returned to Hawkshead for the first two summers of his time at Cambridge, and often spent later holidays on walking tours, visiting places famous for the beauty of their landscape. In 1790 he went on a walking tour of Europe, during which he toured the Alps extensively, and visited nearby areas of France, Switzerland, and Italy.

In 1802, Lowther’s heir, William Lowther, 1st Earl of Lonsdale, paid the £4,000 owed to Wordsworth’s father through Lowther’s failure to pay his aide. It was this repayment that afforded Wordsworth the financial means to marry. On 4 October, following his visit with Dorothy to France to arrange matters with Annette, Wordsworth married his childhood friend Mary Hutchinson. Dorothy continued to live with the couple and grew close to Mary. The following year Mary gave birth to the first of five children, three of whom predeceased her and William:

William Wordsworth died at home at Rydal Mount from an aggravated case of pleurisy on 23 April 1850, and was buried at St Oswald’s Church, Grasmere. His widow, Mary, published his lengthy autobiographical “Poem to Coleridge” as The Prelude several months after his death. Though it failed to interest people at the time, it has since come to be widely recognised as his masterpiece.