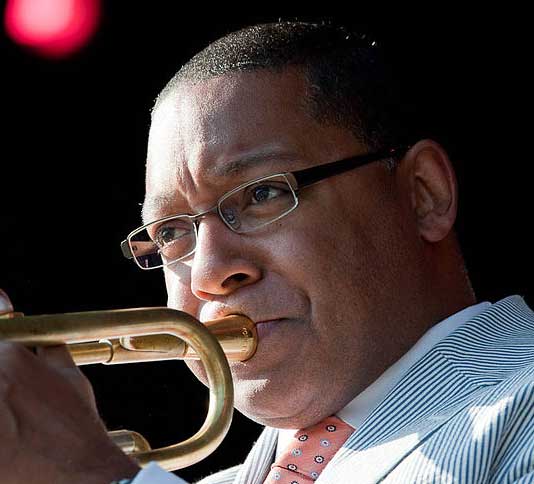 Wynton Learson Marsalis (born October 18, 1961) is an American trumpeter, composer, teacher, and artistic director of Jazz at Lincoln Center. He has promoted classical and jazz music, often to young audiences. Marsalis has won at least nine Grammy Awards, and his Blood on the Fields was the first jazz composition to win the Pulitzer Prize for Music. He is the only musician to win a Grammy Award in jazz and classical during the same year.
Marsalis is the son of jazz musician Ellis Marsalis Jr. (pianist), grandson of Ellis Marsalis Sr., and brother of Branford (saxophonist), Delfeayo (trombonist), and Jason (drummer). Marsalis’s son, Jasper Armstrong Marsalis, is a music producer known professionally as Slauson Malone.

Marsalis was born in New Orleans, Louisiana, on October 18, 1961 and grew up in the suburb of Kenner. He is the second of six sons born to Dolores Ferdinand Marsalis and Ellis Marsalis Jr., a pianist and music teacher. He was named for jazz pianist Wynton Kelly. Branford Marsalis is his older brother and Jason Marsalis and Delfeayo Marsalis are younger. All three are jazz musicians. While sitting at a table with trumpeters Al Hirt, Miles Davis, and Clark Terry, his father jokingly suggested that he might as well get Wynton a trumpet, too. Hirt volunteered to give him one, so at the age of six Marsalis received his first trumpet.

Although he owned a trumpet when he was six, he didn’t practice much until he was 12. He attended Benjamin Franklin High School and the New Orleans Center for Creative Arts. He studied classical music at school and jazz at home with his father. He played in funk bands and a marching band led by Danny Barker. He performed on trumpet publicly as the only black musician in the New Orleans Civic Orchestra. After winning a music contest at fourteen, he performed a trumpet concerto by Joseph Haydn with the New Orleans Philharmonic. Two years later he performed Brandenburg Concerto No. 2 in F Major by Bach. At seventeen, he was the youngest musician admitted to Tanglewood Music Center.

In 1979, he moved to New York City to attend Juilliard. He intended to pursue a career in classical music. In 1980 he toured Europe as a member of the Art Blakey big band, becoming a member of The Jazz Messengers and remaining with Blakey until 1982. He changed his mind about his career and turned to jazz. He has said that years of playing Blakey influenced his decision. He recorded for the first time with Blakey and one year later he went on tour with Herbie Hancock. After signing a contract with Columbia, he recorded his first solo album. In 1982 he established a quintet with his brother Branford Marsalis, Kenny Kirkland, Charnett Moffett, and Jeff “Tain” Watts. When Branford and Kenny Kirkland left three years later to record and tour with Sting, Marsalis formed another quartet, this time with Marcus Roberts on piano, Robert Hurst on double bass, and Watts on drums. After a while the band expanded to include Wessell Anderson, Wycliffe Gordon, Eric Reed, Herlin Riley, Reginald Veal, and Todd Williams.