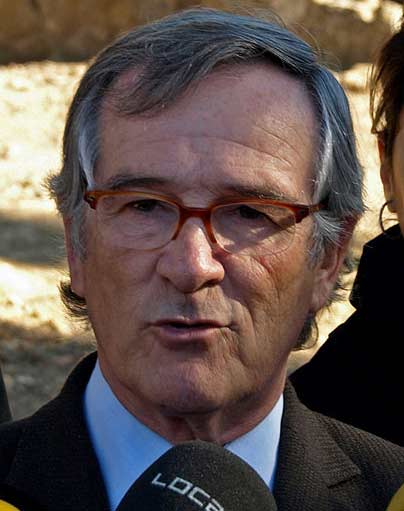 Xavier Trias i Vidal de Llobatera (5 August 1946) is a Spanish politician, member of the Catalan European Democratic Party and was Mayor of Barcelona from July 2011 to June 2015. Among other responsibilities to the Government of Catalonia, he was Minister of Health and Director of the Presidency for various Jordi Pujol Governments.

He is married, has four children and six grandchildren. He has been a member of Democratic Convergence of Catalonia since 1979. He received a degree in Medicine and Surgery from the University of Barcelona in 1970, specializing in pediatrics. Between 1971 and 1973 he completed his post graduate training in Genova, Italy and Bern, Switzerland, where he worked for a year and a half in the investigation of metabolic diseases, their diagnosis and treatment.

From 1974 to 1981 he served as a pediatrician at the Children’s Hospital in Vall d’Hebron. Between 1979 and 1981 was member of national hospitals in the “General Council of Doctors in Spain”, and also member of the Board of Hospitals Association of Physicians of Barcelona.

In 1981, he started working Head of Hospital Care, at the Department of Health and Social Security of the Generalitat of Catalonia, headed by the Minister Josep Laporte, who Trias consider as his political father. In September 1983 he assumed ownership of the Directorate General of Health Planning.

In July 1984 he was appointed Director General of the Catalan Institute of Health (ICS), a post he held until his appointment as Minister of Health in July 1988, precisely in place of Laporte. With the Minister Laporte, Trias is considered responsible for the promotion and development of the Catalan health care model, prestige and international recognition.

On 12 January 1996 was appointed Minister of the Presidency, and began to work closely with President Jordi Pujol. In this era, the government created the Catalonia Broadcasting Council (CAC), and improved the labor regime for the officials of the Generalitat, with progress in reconciling family life, among other initiatives.

In March 2000, he was a candidate of Convergence and Union (CiU) for election to Congress. He won and became President and Spokesperson for the Catalan Parliamentary Group of the Congress of Deputies, and Chairman of the Committee on Science and Technology.

On 5 June 2010 he was proclaimed a CiU candidate for the Barcelona City Council, a post he had already held since 14 June 2003 as well as being Chairman of the Municipal Group of CiU. On 22 May he won the elections receiving 29% of the votes and becoming the new mayor on 2 July. In July 2011 he inaugurated the 5th edition of The Brandery show.

On 29 March 2020, during COVID-19 pandemic in Spain, Trias was admitted to hospital after testing positive for COVID-19 and was discharged on 7 April.