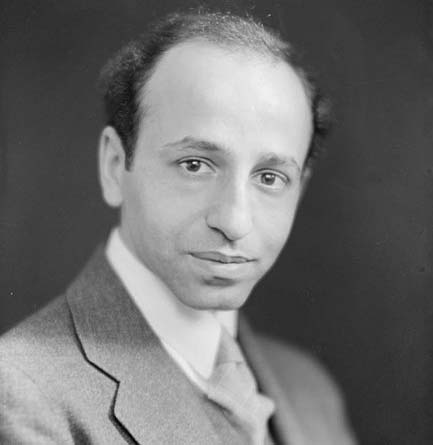 Yousuf Karsh CC (December 23, 1908 – July 13, 2002), was an Armenian-Canadian photographer known for his portraits of notable individuals. He has been described as one of the greatest portrait photographers of the 20th century.

An Armenian Genocide survivor, Karsh migrated to Canada as a refugee. By the 1930s he established himself as a significant photographer in Ottawa, where he lived most of his adult life, though he traveled extensively for work. His iconic 1941 photograph of Winston Churchill was a breakthrough point in his 60-year career, through which he took numerous photos of known political leaders, men and women of arts and sciences. Over 20 photos by Karsh appeared on the cover of Life magazine, until he retired in 1992.

Yousuf Karsh was born to Armenian parents Amsih Karsh, a merchant, and Bahai Nakash, on December 23, 1908 in Mardin, Diyarbekir Vilayet, Ottoman Empire. The city’s Armenian population was largely Arabic-speaking. His Armenian name, Hovsep, is a variant of Joseph, while Yousuf is the Arabic version of the same name. He grew up during the Armenian Genocide, during which some of his family were murdered. Karsh and his family escaped to a refugee camp in Aleppo, Syria in 1922 in a month-long journey with a Kurdish caravan. The Economist noted in their obituary of Karsh that he “thought of himself as an Armenian” and, according to Vartan Gregorian, “Although he was proud to be Canadian, Karsh was equally proud to be Armenian.”

Karsh was sent to Canada by his family. He arrived in Halifax, Nova Scotia on December 31, 1923 by ship from Beirut. He immediately moved to Sherbrooke, Quebec to live with his maternal uncle George Nakashian (Nakash), a portrait photographer.[ Karsh worked for, and was taught photography by his uncle. He gave Karsh a Box Brownie camera. From 1928 to 1931, Karsh apprenticed in Boston, Massachusetts for John H. Garo, the most prominent Armenian photographer in America at the time who had made a name for himself photographing Boston celebrities.

arsh settled in Ottawa and opened his first studio in 1932. It was located on the second floor of a building at 130 Sparks Street, which was later named the Hardy Arcade. He remained there until 1972, when he moved to Château Laurier. He was known professionally as “Karsh of Ottawa”, which was also his signature. He achieved initial success by capturing the attention of Canadian Prime Minister Mackenzie King, who helped Karsh arrange photography sessions with visiting dignitaries.

Throughout his life, Karsh photographed “anyone who was anyone.” When asked why he almost exclusively captured famous people, he replied, “I am working with the world’s most remarkable cross-section of people. I do believe it’s the minority who make the world go around, not the majority.” He once also jokingly remarked, “I do it for my own immortality.” By the time he retired in 1992, more than 20 of his photos had appeared on the cover of Life magazine. Karsh’s photos were known for their use of dramatic lighting, which the hallmark of his portrait style. He had studied it with both Garo in Boston and at the Ottawa Little Theatre, of which he was a member.

His 1941 photo of Winston Churchill, the British Prime Minister, brought him prominence. The photo was taken on December 30, 1941 in the chamber of the Speaker of the House of Commons in the Canadian Parliament in Ottawa after Churchill delivered a speech on World War II to the Canadian members of the parliament. It was arranged by Canadian Prime Minister Mackenzie King.Churchill is particularly noted for his posture and facial expression, which have been compared to the wartime feelings that prevailed in the UK: persistence in the face of an all-conquering enemy. The photo session was short and, just before exposure, Karsh moved towards Churchill and removed the cigar which he had in his hand. Churchill was miffed and showed his displeasure in the portrait. The photo, which according to The Economist is the “most reproduced portrait in the history of photography”, has been described as one of the “most iconic portraits ever shot”. USC Fisher Museum of Art described it as a “defiant and scowling portrait [which] became an instant icon of Britain’s stand against fascism.” It appeared on the cover of the May 21, 1945 issue of Life, which bought it for $100. It now hangs on the wall of the Speaker’s chamber.

During World War II, Karsh photographed political and military leaders and began capturing photos of writers, actors, artists, musicians, scientists, and celebrities in the post-war period. His 1957 portrait of the American novelist Ernest Hemingway, which was shot at Hemingway’s Cuban home Finca Vigia, is another well-known photo by Karsh. (Finca Vigia is located in the small, working-class town of San Francisco de Paula, about 10 miles east of Havana.) According to Amanda Hopkinson it made Hemingway look like the hero of his novel The Old Man and the Sea. His other notable portraits include George Bernard Shaw at an old age (1943), Dwight D. Eisenhower as a five-star general and Supreme Commander of the Allied Expeditionary Force (1946), American artist Georgia O’Keeffe in her New Mexico studio (1956), Soviet leader Nikita Khrushchev swathed in fur (1963).

Besides portraits of the famous, Karsh photographed assembly line workers in Windsor, Ontario, commissioned by the Ford Motor Company of Canada. He also photographed landscapes of Rome and the Holy Land to be included in books in collaboration with Bishop Fulton J. Sheen, an annual poster for the Muscular Dystrophy Association, and other works.

He was a visiting professor at Ohio University and at Emerson College in Boston.

Karsh retired in July 1993, aged 84. His penultimate sittings in May 1993 were with President Bill Clinton and First Lady Hillary. He closed his studio at Château Laurier and moved to Boston in 1997. He died on July 13, 2002 at Brigham and Women’s Hospital in Boston after complications following surgery. A private funeral was held in Ottawa. He was interred in Notre-Dame Cemetery in Ottawa.