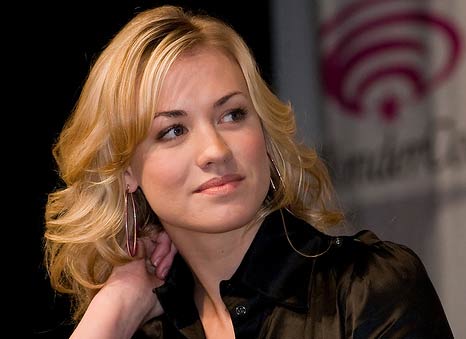 Yvonne Jaqueline Strzechowski (born 30 July 1982), known professionally as Yvonne Strahovski (/strəˈhɒvski/), is an Australian actress. She is best known for her roles as CIA Agent Sarah Walker in the NBC spy drama series Chuck (2007–2012), Hannah McKay in the Showtime drama series Dexter (2012–2013), and CIA Agent Kate Morgan in the Fox event series 24: Live Another Day (2014). She stars as Serena Joy Waterford in the Hulu drama series The Handmaid’s Tale (2017–present), for which she has received a Primetime Emmy Award nomination.

Strahovski was born in Werrington Downs, New South Wales, Australia the daughter of Piotr and Bożena Strzechowski; her parents immigrated from Warsaw, Poland. Her father is an electronic engineer, and her mother is a lab technician. Strahovski began acting lessons at age 12 and spent her high school years attending Santa Sabina College, Strathfield. She attended the University of Western Sydney’s Theatre Nepean in 2003 and co-founded a small theater company.

Strahovski is a supporter of PETA and appeared in an ad for their “Adopt, Don’t Buy” campaign.

At the 2017 Emmy Awards, Strahovski revealed that she was married to Tim Loden, her partner of six years. Their first child, a boy named William, was born in October 2018.