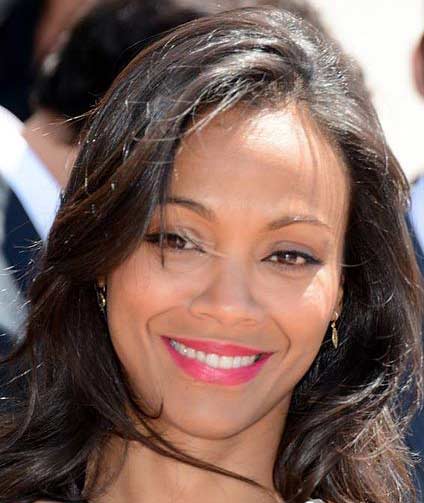 Zoë Yadira Saldaña Nazario (born June 19, 1978) is an American actress. After her performances with the theater group Faces, she was in a 1999 episode of Law & Order. Her film career began a year later with Center Stage (2000) portraying a ballet dancer.

Saldana worked in science fiction films, beginning in 2009 with her first of multiple appearances as Nyota Uhura in the Star Trek film series and her first appearance as Neytiri in the Avatar film series. She portrayed Gamora in the Marvel Cinematic Universe, beginning with Guardians of the Galaxy (2014). Due to her appearances in some of the highest-grossing films of all time, such as Avatar and Avengers: Endgame, Saldana is the second highest-grossing film actress of all time, as of 2019. Her films grossed more than $11 billion worldwide.

Saldana was born June 19, 1978 in Passaic, New Jersey. Her father, Aridio Saldaña, was Dominican, while her mother, Asalia Nazario, is Puerto Rican. She was christened Zoë Yadira Saldaña Nazario, reflecting both parents’ surnames. With regard to her racial mix, Saldana stated, “There’s no one way to be Black. I’m Black the way I know how to The majority of her early childhood was in Jackson Heights, New York. She was raised bilingual, speaking English and Spanish. She has two sisters, Cisely and Mariel. Their father died in a vehicle wreck around her ninth birthday, and their mother moved with the children to the Dominican Republic.

Saldana discovered her love of dance in the Dominican Republic, then enrolled in the ECOS Espacio de Danza Academy studying forms of dance, but describes ballet as her passion. She told Vanity Fair she quit ballet because she did not “have the feet” and had too much pride and ambition to just be in the corps de ballet. The family returned to New York city after her sophomore year at Newtown High School. In 1995, she performed with the Faces theater group in Brooklyn, with plays providing positive messages for teens via themes dealing with issues such as substance abuse and adolescent sex. During these years, she performed with the New York Youth Theater; her appearance in their production of Joseph and the Amazing Technicolor Dreamcoat led a talent agency to recruit her. Her dance training and her acting experience helped her land her first film role, playing ballet student Eva Rodriguez in Center Stage (2000).

In June 2010, Saldana was engaged to her longtime boyfriend Keith Britton, an actor and the CEO of My Fashion Database. In November 2011, she and Britton announced they had ended their relationship after eleven years.

Saldana was in a relationship with actor Bradley Cooper from December 2011 to January 2013.

In March 2013, Saldana began dating Italian artist Marco Perego. They married in June 2013 in London. In July 2015, Saldana revealed Perego adopted her surname upon marriage. Thereafter, Zoe became Zoe Saldana-Perego and Marco became Marco Perego-Saldana. Their children would be Perego-Saldana. Saldana and Perego have three sons, twins born in November 2014 and the third born in February 2017. Saldana has stated her children will be multi-lingual because she and her husband speak Spanish and English around them.

In July 2016, during an interview with Net-a-Porter’s The Edit, Saldana revealed she has Hashimoto’s thyroiditis, an autoimmune disease, along with her mother and sisters. To combat the effects of this disease, Saldana said she and her husband adhere to a gluten- and dairy-free diet.

Saldana is a supporter of FINCA International, a micro-finance organization.

Saldana is left-handed. In 2015, during International Left-Handers Day, she tweeted in support of the Left-Handers Movement.