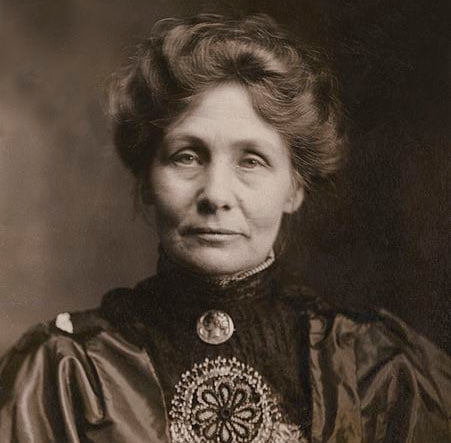 Emmeline Pankhurst (born Emiline Goulden; 15 July 1858 – 14 June 1928) was a British political activist. She is best remembered for organizing the UK suffragette movement and helping women win the right to vote. In 1999, Time named her as one of the 100 Most Important People of the 20th Century, stating that “she shaped an idea of women for our time” and “shook society into a new pattern from which there could be no going back”. She was widely criticised for her militant tactics, and historians disagree about their effectiveness, but her work is recognised as a crucial element in achieving women’s suffrage in the United Kingdom.
Born in the Moss Side district of Manchester to politically active parents, Pankhurst was introduced at the age of 14 to the women’s suffrage movement. She founded and became involved with the Women’s Franchise League, which advocated suffrage for both married and unmarried women. When that organisation broke apart, she tried to join the left-leaning Independent Labour Party through her friendship with socialist Keir Hardie but was initially refused membership by the local branch on account of her sex. While working as a Poor Law Guardian, she was shocked at the harsh conditions she encountered in Manchester’s workhouses.

In 1903, Pankhurst founded the Women’s Social and Political Union (WSPU), an all-women suffrage advocacy organisation dedicated to “deeds, not words”. The group identified as independent from – and often in opposition to – political parties. It became known for physical confrontations: its members smashed windows and assaulted police officers. Pankhurst, her daughters, and other WSPU activists received repeated prison sentences, where they staged hunger strikes to secure better conditions, and were often force-fed. As Pankhurst’s eldest daughter Christabel took leadership of the WSPU, antagonism between the group and the government grew. Eventually the group adopted arson as a tactic, and more moderate organisations spoke out against the Pankhurst family. In 1913 several prominent individuals left the WSPU, among them Pankhurst’s younger daughters, Adela and Sylvia. Emmeline was so furious that she “gave [Adela] a ticket, £20, and a letter of introduction to a suffragette in Australia, and firmly insisted that she emigrate”. Adela complied and the family rift was never healed. Sylvia became a socialist.

With the advent of the First World War, Emmeline and Christabel called an immediate halt to the militant terrorism in support of the British government’s stand against the “German Peril”. They urged women to aid industrial production and encouraged young men to fight, becoming prominent figures in the white feather movement. In 1918, the Representation of the People Act granted votes to all men over the age of 21 and women over the age of 30. This discrepancy was intended to ensure that men did not become minority voters as a consequence of the huge number of deaths suffered during the First World War.

She transformed the WSPU machinery into the Women’s Party, which was dedicated to promoting women’s equality in public life. In her later years, she became concerned with what she perceived as the menace posed by Bolshevism and joined the Conservative Party. She was selected as the Conservative candidate for Whitechapel and St Georges in 1927. She died on 14 June 1928, only weeks before the Conservative government’s Representation of the People (Equal Franchise) Act 1928 extended the vote to all women over 21 years of age on 2 July 1928. She was commemorated two years later with a statue in Victoria Tower Gardens, next to the Houses of Parliament.

Emmeline Goulden[11] was born on Sloan Street in the Moss Side district of Manchester on 15 July 1858. Although her birth certificate says otherwise, she believed and later claimed her birthday was a day earlier, on Bastille Day (14 July). Most biographies, including those written by her daughters, repeat this claim. Feeling a kinship with the female revolutionaries who stormed the Bastille, she said in 1908: “I have always thought that the fact that I was born on that day had some kind of influence over my life.” The family into which she was born had been steeped in political agitation for generations; her mother, Sophia (née Craine), was a Manx woman from the Isle of Man who was descended from men who were charged with social unrest and slander. In 1881 the Isle of Man was the first country to grant women the right to vote in national elections. Her father, Robert Goulden, came from a modest Manchester merchant family with its own background of political activity. Robert’s mother worked with the Anti-Corn Law League, and his father was present at the Peterloo massacre, when cavalry charged and broke up a crowd demanding parliamentary reform.

The Gouldens’ first son died at the age of two, but they had 10 other children; Emmeline was the eldest of five daughters. Soon after her birth, the family moved to Seedley, where her father had co-founded a small business. He was also active in local politics, serving for several years on the Salford town council. He was an enthusiastic supporter of dramatic organisations including the Manchester Athenaeum and the Dramatic Reading Society. He owned a theatre in Salford for several years, where he played the leads in several Shakespeare plays. Goulden absorbed an appreciation of drama and theatrics from her father, which she used later in social activism. The Gouldens included their children in social activism. As part of the movement to end U.S. slavery, Robert welcomed American abolitionist Henry Ward Beecher when he visited Manchester. Sophia used the novel Uncle Tom’s Cabin, written by Beecher’s sister Harriet Beecher Stowe, as a regular source of bedtime stories for her sons and daughters. In her 1914 autobiography My Own Story, Goulden recalls visiting a bazaar at a young age to collect money for newly freed slaves in the U.S.

Emmeline began to read books when she was very young, with one source claiming that she was reading as early as the age of three. She read the Odyssey at the age of nine and enjoyed the works of John Bunyan, especially his 1678 story The Pilgrim’s Progress. Another of her favourite books was Thomas Carlyle’s three-volume treatise The French Revolution: A History, and she later said the work “remained all [her] life a source of inspiration”. Despite her avid consumption of books, however, she was not given the educational advantages enjoyed by her brothers. Their parents believed that the girls needed most to learn the art of “making home attractive” and other skills desired by potential husbands. The Gouldens deliberated carefully about future plans for their sons’ education, but they expected their daughters to marry young and avoid paid work. Although they supported women’s suffrage and the general advancement of women in society, the Gouldens believed their daughters incapable of the goals of their male peers. Feigning sleep one evening as her father came into her bedroom, Goulden heard him pause and say to himself, “What a pity she wasn’t born a lad.”

It was through her parents’ interest in women’s suffrage that Goulden was first introduced to the subject. Her mother received and read the Women’s Suffrage Journal, and Goulden grew fond of its editor Lydia Becker. At the age of 14, she returned home from school one day to find her mother on her way to a public meeting about women’s voting rights. After learning that Becker would be speaking, she insisted on attending. Goulden was enthralled by Becker’s address and later wrote, “I left the meeting a conscious and confirmed suffragist.” A year later, she arrived in Paris to attend the École Normale de Neuilly. The school provided its female pupils with classes in chemistry and bookkeeping, in addition to traditionally feminine arts such as embroidery. Her roommate was Noémie, the daughter of Victor Henri Rochefort, who had been imprisoned in New Caledonia for his support of the Paris Commune. The girls shared tales of their parents’ political exploits and remained good friends for years. Goulden was so fond of Noémie and the school that she returned with her sister Mary Jane as a parlour boarder after graduating. Noémie had married a Swiss painter and quickly found a suitable French husband for her English friend. When Robert refused to provide a dowry for his daughter, the man withdrew his offer of marriage and Goulden returned, miserable, to Manchester.

Emmeline Pankhurst’s campaign for Parliament was pre-empted by her ill health and a final scandal involving Sylvia. The years of touring, lectures, imprisonment and hunger strikes had taken their toll; fatigue and illness became a regular part of Pankhurst’s life. Even more painful, however, was the news in April 1928 that Sylvia had given birth out of wedlock. She had named the child Richard Keir Pethick Pankhurst, in memory of her father, her ILP comrade, and her colleagues from the WSPU respectively. Emmeline was further shocked to see a report from a newspaper in the US that declared that “Miss Pankhurst” – a title usually reserved for Christabel – boasted of her child being a triumph of “eugenics”, since both parents were healthy and intelligent. In the article, Sylvia also spoke of her belief that “marriage without legal union” was the most sensible option for liberated women. These offences against the social dignity which Pankhurst had always valued devastated the elderly woman; to make matters worse, many people believed the “Miss Pankhurst” in newspaper headlines referred to Christabel. After hearing the news, Emmeline spent an entire day crying; her campaign for Parliament ended with the scandal.

As her health went downhill, Emmeline Pankhurst moved into a nursing home in Hampstead. She requested that she be treated by the doctor who attended to her during her hunger strikes. His use of the stomach pump had helped her feel better while in prison; her nurses were sure that the shock of such treatment would severely wound her, but Christabel felt obligated to carry out her mother’s request. Before the procedure could be carried out, however, she fell into a critical condition from which none expected her to recover. On Thursday 14 June 1928 Pankhurst died, at the age of 69. She was interred in Brompton Cemetery in London.

News of Emmeline Pankhurst’s death was announced around the country, and extensively in North America. Her funeral service on 18 June 1928 was filled with her former WSPU colleagues and those who had worked beside her in various capacities. The Daily Mail described the procession as “like a dead general in the midst of a mourning army”. Women wore WSPU sashes and ribbons, and the organisation’s flag was carried alongside the Union Flag. Christabel and Sylvia appeared together at the service, the latter with her child. Adela did not attend. Press coverage around the world recognised her tireless work on behalf of women’s right to vote – even if they did not agree on the value of her contributions. The New York Herald Tribune called her “the most remarkable political and social agitator of the early part of the twentieth century and the supreme protagonist of the campaign for the electoral enfranchisement of women.”

Shortly after the funeral, one of Pankhurst’s bodyguards from her WSPU days, Catherine Marshall, began raising funds for a memorial statue. In spring 1930 her efforts bore fruit, and on 6 March her statue in Victoria Tower Gardens, next to and gesturing towards the Houses of Parliament, was unveiled. A crowd of radicals, former suffragettes, and national dignitaries gathered as former Prime Minister Stanley Baldwin presented the memorial to the public. In his address, Baldwin declared: “I say with no fear of contradiction, that whatever view posterity may take, Mrs. Pankhurst has won for herself a niche in the Temple of Fame which will last for all time.” Sylvia was the only Pankhurst daughter in attendance; Christabel, touring North America, sent a telegram which was read aloud. While planning the agenda for the day, Marshall had intentionally excluded Sylvia, who in her opinion had hastened Pankhurst’s death. Historic England listed the statue as Grade II on 5 February 1970.