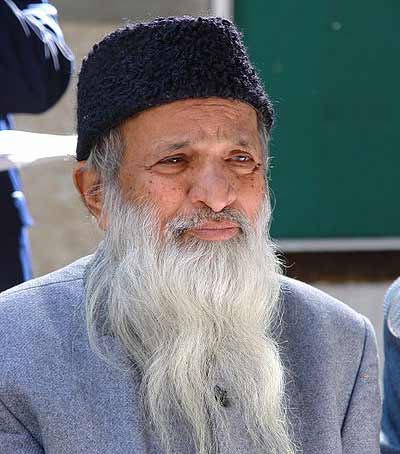 Born in Bantva, Gujarat, British India in 1928, Edhi and his family fled to the newly independent Dominion of Pakistan during the Partition of India and settled down in Karachi. Here, he established a free dispensary for the city’s low-income residents. His activities and motives were described in detail by many forms of media at the time, which quoted: “Edhi is also inspired by the famous Khaksar Tehrik [Founded by Allama Mashriqi], a semi-military volunteer organisation that emerged from the lower class. Dressed in Khaki, the colour of the earth and armed with belchas (spades), the volunteers would walk from one village to another village to solve people’s problems. (Urban Navigations: Politics, Space and the City in South Asia)”

Edhi’s charitable activities expanded greatly in 1957 when an Asian flu epidemic (originating in China) swept through Pakistan and the rest of the world. Donations allowed him to buy his first ambulance the same year. He later expanded his charity network with the help of his wife Bilquis Edhi.

Over his lifetime, the Edhi Foundation expanded, backed entirely by private donations, which included establishing a network of 1,800 ambulances. By the time of his death, Edhi was registered as a parent or guardian of nearly 20,000 adopted children of whom he was an active caretaker. He is known amongst Pakistanis as the “Angel of Mercy” and is considered to be Pakistan’s most respected and legendary figure. In 2013, The Huffington Post claimed that he might be “the world’s greatest living humanitarian”.

Edhi maintained a hands-off management style and was often critical of the corruption found within some of the religious organizations and the politicians. He was a strong proponent of religious tolerance in Pakistan and extended his support to the victims of Hurricane Katrina and the 1985 famine in Ethiopia. He was nominated several times for the Nobel Peace Prize, including by Malala Yousafzai. Edhi received several awards including the Gandhi Peace Award, Ahmadiyya Muslim Peace Prize and the UNESCO-Madanjeet Singh Prize.

Abdul Sattar Edhi was born on 28 July 1928 in Bantva, Gujarat, British India (present-day India) to a Memon family. In his biography, he said his mother would give him 1 paisa for his meals and another to give to a poor/needy child. When Edhi was eleven years old, his mother became paralysed from a stroke and died by the time he turned nineteen in 1947. His personal experiences as a dedicated caretaker for his mother during her illness drove him to develop a system of services for the old, mentally/physically ill and challenged. The partitioning of India later that same year led Edhi and his family to migrate to the newly founded Pakistan. He shifted to Karachi to work in a wholesale market. He initially started as a peddler, and later became a commission agent selling cloth. After a few years, he established a free dispensary with help from his community.

Early Days of the Edhi Trust

The spirit of the Edhi Foundation was born when Abdul Sattar Edhi was a child. At the tender age of eleven, Edhi experienced his mother becoming paralyzed and mentally ill after suffering from a major stroke. A young Edhi devoted himself to her care and took on the role of feeding, bathing, and clothing her daily while responding to any and every call and necessity she required. Her deteriorating mental and physical condition left a strong and lasting impact on Edhi’s mind. As a result, he dropped out of school and strictly focused on his mother’s health. Edhi’s mother died when he was nineteen in 1947. Her death made him reflect on others around him who were suffering from similar illnesses. After his family moved to Pakistan later that year, Edhi established a free dispensary with the help of other community members. His vision for establishing and improving the healthcare sector in Pakistan enabled him to establish a personal welfare trust for the people called “Edhi Trust”. With the help of public funding, Edhi Trust was able to collect Rs.200,000. He expanded the trust to other medical fields and through hard work and diligence, he went on to establish a maternity home and an emergency ambulance service with the primary goal of helping those who could not help themselves. Edhi made it a habit to involve himself in every aspect of his foundation whenever possible. His foundation raised money for most noble causes and eventually, the Edhi Foundation had allotted a quota for each humanitarian cause, whether it was burying abandoned corpses or aiding in disaster relief.

He told NPR in 2009: “I saw people lying on the pavement… The flu had spread in Karachi, and there was no one to treat them. So I set up benches and got medical students to volunteer. I was penniless and begged for donations on the street. And people gave. I bought this 8-by-8 room to start my work.”

In 1948, at the age of 20, Edhi joined a Memon charity as a volunteer. However, once he found out that the charity only attended to the needs of Memon people, he confronted his superiors to no avail, which caused him to leave to form an independent medical centre. He feared the Memon community would retaliate and possibly have him killed because of the stand he made, so he left the country in search of both safety and knowledge. Edhi travelled to Europe and made his way to London via Rome by asking for donations. His time in London allowed him to thoroughly examine the social welfare programs active throughout the United Kingdom, off of which he organized and laid the foundation for the rest of his charitable works.

“People have become educated, but have yet to become human.”

In his autobiography, Edhi revealed that he didn’t know his actual date of birth, but according to media reports published following his death, he was born on 1 January 1928. In 2017, Google Doodle marked his date of birth as 28 February 1928 following which several reports emerged in favour of 28 February 1928 being his birthdate. Metro noted “There has been uncertainty about when his birthday is. Some have reported it as 1 January in the past – however, now it is widely believed to be 28 February.” WIRED noted that “Previous reports, including those surrounding his funeral, state Edhi was born on January 1. An obituary in The Guardian doesn’t list a birthday date, simply putting circa 1928. The date January 1 can, at times, be used in place of a specific date when only a year is known, but this tends to be avoided due to the confusion it can cause. However, Google has since told WIRED that the birthdate of February 28 was sourced directly from inquiring with Edhi’s family/relatives.”

The Nation reported that Bilquis Edhi, the wife of Abdul Sattar Edhi, in an interview to a TV channel said ‘We never even celebrated his birthday while he was alive. We were unaware of the day he was born.” Daily Times reported “There is some confusion over his actual birth date as Edhi himself was unsure and believed he was born between 1926 and 1928.”

In the early 1980s, Edhi was arrested by Israeli troops while he was entering Lebanon. In 2006, he was detained by authorities in Toronto, Ontario, Canada, for over sixteen hours. In January 2008, U.S. immigration officials at the John F. Kennedy Airport in New York City investigated him for over eight hours after seizing his passport and other documents. When asked by media officials about the frequent detentions, Edhi said: “The only explanation I can think of is my beard and my dress.” His appearance in traditional Pakistani clothing and a long beard made he appear visibly Muslim and prompted U.S. and Canadian travel authorities to keep him for additional questioning.

In 1965, Edhi married Bilquis, a nurse who worked at an Edhi Trust dispensary. They had four children, two daughters and two sons. Bilquis is responsible for running the free maternity home at the foundation’s headquarters in Karachi and organizes the adoption of abandoned babies including those who are otherwise at risk of being killed as a potential consequence of being born out of wedlock or due to rape. Edhi was known for his ascetic lifestyle, owning only two pairs of clothes, never taking salary from his organization and living in a small apartment next to his organization’s office. Edhi often ran into trouble with radical Islamists and the hard right-wing who opposed him because of his offering of full humanitarian services to everyone, particularly low-class citizens, Hindus, and other general non-Muslims. He was greatly admired in and outside of Pakistan, and described as “a deeply religious man, a practicing Muslim standing up for the rights of minorities in Pakistan.”

On 25 June 2013, Edhi’s was hospitalized due to failing kidneys; it was announced that he would be on dialysis for the rest of his life unless he found a kidney donor. He later died on 8 July 2016 at the age of 88 due to complete kidney failure after having been placed on a ventilator. One of his last wishes was that his organs be donated for the use of the needy but due to his poor health, only his corneas were suitable for later use in donation. He was laid to rest at Edhi Village in Karachi.

Reactions to his death came from several high-ranking Pakistani officials, with then-Prime Minister Nawaz Sharif saying in an official statement: “We have lost a great servant of humanity. He was the real manifestation of love for those who were socially vulnerable, impoverished, helpless and poor.” Chief of Army Staff Raheel Sharif called him a “true humanitarian”.

Prime Minister Sharif declared national mourning on the day following Edhi’s death and announced a state funeral for him. He became the third person in Pakistan’s history to receive a state gun carriage funeral after Muhammad Ali Jinnah and Zia-ul-Haq. He was the only Pakistani without a state authority or a state role to receive a state funeral. According to the Inter-Services Public Relations (ISPR), state honours were given to Edhi by a guard of honour and a 19-gun salute. The attendees at his Janazah (Islamic funeral prayer) included dignitaries such as Mamnoon Hussain (President of Pakistan), Raza Rabbani (Chairman of the Senate of Pakistan), Ishratul Ibad (Governor of Sindh), Qaim Ali Shah and Shehbaz Sharif (the Chief Ministers of Sindh and Punjab, respectively), Raheel Sharif (Chief of Army Staff) along with Muhammad Zakaullah and Sohail Aman (the Chiefs of Staff of the Pakistani Navy and Air Force), at the National Stadium, Karachi.

On 4 July 2016, the Defence Housing Authority announced its decision to rename the 5 kilometre-long Beach Avenue in Seaview as ‘Abdul Sattar Edhi Avenue’ in recognition of the welfare services by Edhi over the course of his lifetime.

On 31 March 2017, a Rs.50 cupronickel commemorative coin was issued across the country upon the recommendation of the State Bank of Pakistan to Prime Minister Sharif, who decided to commemorate Edhi’s services on the national level. Edhi became the only social worker and the fifth Pakistani personality to have been honoured with a commemorative coin.

In 2011, then-Prime Minister of Pakistan Yousaf Raza Gilani recommended Edhi for a nomination for the Nobel Peace Prize. Again in early 2016, a petition signed by 30,000 for a Nobel Peace Prize for Edhi was moved by Ziauddin Yousafzai, the father of Malala Yousafzai. In her condolence message on Edhi’s death, broadcast by BBC Urdu, Malala quoted that “as a Nobel Peace Prize winner, I hold the right to nominate people for the prize and I have nominated Abdul Sattar Edhi”.

Najam Sethi, a governing board member of the Pakistan Cricket Board proposed to rename Gaddafi Stadium after Edhi.