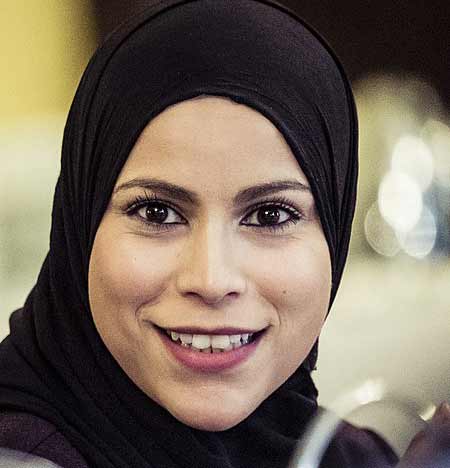 Alaa Murabit MSC (Arabic: آلاء المرابط‎; born 26 October 1989) is a Libyan-Canadian physician, Meritorious Service Cross recipient, one of 17 Global Sustainable Development Goals Advocates appointed by the Secretary-General of the United Nations, and a UN High-Level Commissioner on Health Employment and Economic Growth. In 2019 Murabit was selected as one of the Top 20 of the World’s 100 Most Influential People in Gender Policy alongside Ruth Bader Ginsburg, Melinda Gates, and Michelle Obama. Murabit is the co-founder of The Omnis Institute, an independent non-profit organization that aims to work on critical global issues through the empowerment of emerging local leaders. She previously founded and spearheaded Voice of Libyan Women at the age of 21.

Her TED Talk, released in July 2015, “What my religion really says about women” has been viewed over five million times on TED.com and YouTube combined, was selected as the TED Talk of the Day and one of four moving TED Talks you should watch right now by The New York Times and one of 12 TED Talks That Define the Future of Feminism

She is a Forbes 30 Under 30, a UCD James Joyce Award recipient, one of Canada’s 100 most impactful women in history, and Nobel Peace Prize nominee. Her leadership in global policy and security was recognized by Harvard Law who named her the youngest 2017 Woman Inspiring Change. She has previously been named the Marisa Bellisario International Humanitarian by the Italian Government, the 2014 International TrustWomen Hero by The New York Times, one of 25 women under 25 to watch by Newsweek, a 100 Top Woman by the BBC and the SAFE Global Hero.

Murabit received her Medical Doctorate from Al Zawiya University in 2013 and a Masters in International Strategy and Diplomacy with Distinction from the London School of Economics in 2016.

Murabit was born and raised in Saskatoon, Saskatchewan, Canada, the sixth of ten children in her family. Her father is a doctor. She has stated that, although she initially had no plans on advocating women’s rights, her parents’ equal treatment of her and her brothers played an extremely important role in the way she viewed the world, “I know I have a duty to every child to recognize and cultivate their own sense of leadership, because had it not been for my mother, I would not have recognized or claimed my own space to lead.”

After completing high school at age fifteen, she moved with members of her family to Zawiya, Libya in 2005.

She studied at the College of Medicine at Al Zawiya University in Libya from 2006 to 2013, and worked at Zawiya Teaching Hospital and at various makeshift clinics during the 2011 civil war. When the war began, her father became involved almost immediately with the rebels, providing medical care for rebel soldiers, appearing in SkyNews footage with Alex Crawford under the name “Dr. M”, creating insecurity for her family.

Murabit received her Doctor of Medicine from Al Zawiya University in 2013. She went on to receive a Masters in International Strategy and Diplomacy with Distinction from the London School of Economics in 2016 with research focused on inclusive security and securitization.

Murabit has received the following national and international honors (awards and nominations):