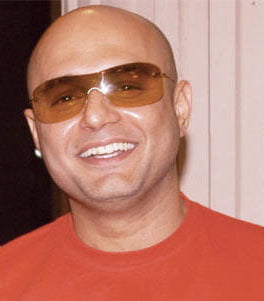 Ali Azmat Butt (born 20 April 1970) is a Pakistani singer-songwriter, musician and actor. He is best known as the lead singer for the influential Sufi Rock band Junoon and for his subsequent solo career. In 2001, he became part of the first Pakistani band (Junoon) ever to perform at the United Nations General Assembly.

Azmat was born in Havelian, Khyber Pakhtunkhwa where his grandfather was posted as station master of Havelian Railway Station, while he grew up in Garhi Shahu, Lahore, into a family of ethnic Kashmiri descent. His father, Nazir Ahmed Butt, was a middle-class businessman, who died in 2013. He went to Sydney, Australia, for his higher studies, but soon returned to Pakistan before completing university. His first band Jupiters was known for performing covers at small gigs in Lahore. While with them, Azmat wrote his legendary hit song Dosti. He later sang and recorded Dosti with Junoon, after which the song gained national fame. Junoon also made a comeback after 13 years while performing at a concert in Karachi arranged by Sooper.

Ali Azmat started out his career with Jupiters in 1986, based in his hometown of Lahore. Jupiters were known for doing covers of American pop and rock songs at small gigs. Azmat left Jupiters in 1990 to join Junoon.

Ali Azmat released his first album Junoon with the band, the album was produced by band’s founder and lead-guitarist Salman Ahmed. Azmat’s vocals featured on all the songs except for Khwaab, Jiyain and Jogiya. After launch of the band’s second album Talaash both Ali Azmat and Junoon rose to fame.

Ali Azmat alongside Junoon in 1995 launched Kashmakash, a compilation album and first ever in Pakistan, one song from this compilation Ehtesaab caused a major controversy. The 1996 album Inquilaab was a major hit and its only single Jazba-e-Junoon was a super hit and topped chart, it became signature song and national song of 1996 Cricket World Cup and Pakistan national cricket team. Azmat gained further success after release of the sufi rock hit single Sayonee from their fourth album Azadi (1997). Azmat got international fame after release of Azadi in India. Azmat featured on 4 more albums Parvaaz (1999), Andaz (2001) Dewaar (2003) Infiniti (2007) with the band. After release of Infiniti, the band broke-up, Ali Azmat continued his solo career.

Junoon won the “Best International Group” award at the Channel V Awards in New Delhi in 1998, beating Prodigy, Sting and Def Leppard. The Band’s first international release Azadi, went triple platinum in India alone. “Sayonee” was at the top of the Mtv India and Channel V charts for over two months. Junoon won the Award for “Best Rock Band” at the Indus Music awards in 2004. Indus Music Awards and from ARY Asian/Bollywood Awards. Junoon has also been awarded several awards for their contribution towards peace and South East culture by BBC, UNESCO and South Asian Journalists Association. Junoon was nominated for Best Musical Group at the Lux Style Awards several years in a row.