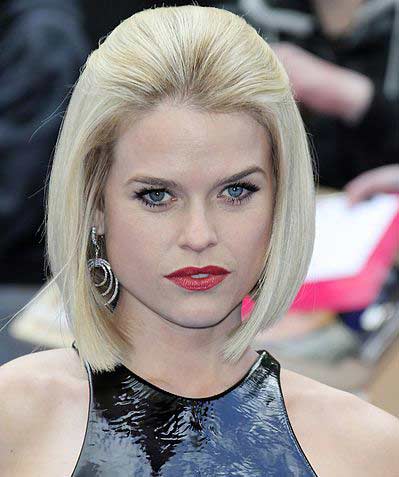 Alice Sophia Eve (born 6 February 1982) is an English actress. Her movie career includes roles in She’s Out of My League, Men in Black 3, Star Trek Into Darkness, and Before We Go. She has had recurring roles on the TV series Entourage and Iron Fist.

Eve was born in London, the daughter of actors Trevor Eve and Sharon Maughan. She has two younger brothers, and is of English, Irish and Welsh descent. She went to Bedales School, and More House School, and then took her A-levels at Westminster School in London.

During her gap year, she studied at the Beverly Hills Playhouse and then read English at St Catherine’s College, Oxford. While at Oxford, she appeared in student productions of The Importance of Being Earnest, Animal Crackers (which toured to the Edinburgh Festival Fringe) and Scenes from an Execution.

Eve has appeared in television dramas such as the BBC’s The Rotters’ Club, Agatha Christie’s Poirot and Hawking and starred in the drama film Stage Beauty (2004).

In 2006, she starred in two comedy films: Starter for 10 and Big Nothing (in which she and co-star Simon Pegg put on American accents). She spent the early part of 2006 in India working on the drama miniseries Losing Gemma about backpackers.

On the stage, Eve has appeared in two plays directed by Trevor Nunn. In 2006, she played young Esme/Alice in the new Tom Stoppard play Rock ‘n’ Roll, at the Royal Court Theatre, later reprising her role for the 2007 Broadway transfer. For this performance, she was nominated for the best supporting actress award at the Whatsonstage.com Theatregoers’ Choice Awards.

In 2009, she played Roxane in a production of Cyrano de Bergerac at the Chichester Festival Theatre.

In 2010, Eve played the female lead role in the American romantic comedy She’s Out of My League, in which her parents play the roles of her character’s parents. She also played the role of Erin, Charlotte’s Irish nanny, in Sex and the City 2.

During 2011, Eve had a recurring guest role in season 8 of the HBO series Entourage, as Sophia, a journalist and love interest to Vincent Chase. In 2011 Eve also portrayed Hollywood actress Lara Tyler in the romantic comedy The Decoy Bride. Eve is also known for her role of Dr. Carol Marcus in Star Trek Into Darkness.

In 2012, she played the younger 1969 version of Agent O in the sci-fi comedy Men in Black 3, the older version being played by Emma Thompson.

In 2013, she co-starred in the romantic drama Before We Go with Chris Evans, who also directed the film. She played herself in the Hollywood film Night at the Museum: Secret of the Tomb (2014) and has since starred in several productions, including the action thriller Criminal (2016).

In 2016, she appeared in “Nosedive”, an episode of the anthology series Black Mirror. In December 2017, Eve joined Netflix’s Iron Fist as Mary Walker.