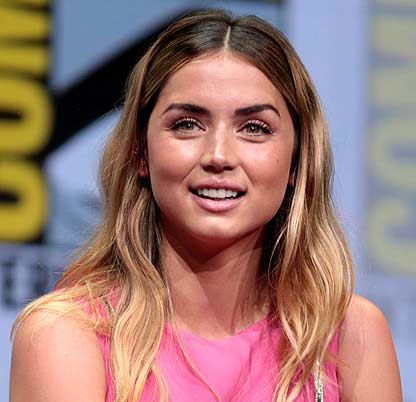 Ana Celia de Armas Caso born 30 April 1988) is a Cuban-Spanish actress. She began her career as a teenager in her home country of Cuba and most notably had a leading role in the romantic drama Una rosa de Francia (2006). At the age of 18, she moved to Madrid, Spain and starred in the popular teen drama El Internado for six seasons from 2007 to 2010.

Ana Celia de Armas Caso was born on 30 April 1988 in Havana, Cuba. She lived with her grandparents as a young child; her parents and older brother moved to the seaside town of Santa Cruz del Norte and visited her in Havana on weekends. She later joined them in Santa Cruz del Norte and, when she was 10, the whole family returned to the capital city to live with her grandparents. Her father, Ramón, worked in different positions including as a bank manager, a teacher, a school principal, and the deputy mayor of a town. He had previously studied philosophy at a Soviet university. Her mother, Ana, worked in the human resources section of the Ministry of Education. She has one older brother, Javier, a New York-based photographer who, in 2020, was questioned by Cuban police due to his critical stance on Decree 349 and his links to artists under government surveillance. While de Armas grew up with food rationing, fuel shortages and electricity blackouts during Cuba’s Special Period, she has described her childhood as happy.

As a teenager, de Armas had no internet access and had limited knowledge of popular culture beyond Cuba. She was allowed to watch “20 minutes of cartoons on Saturday and the Sunday movie matinee.” Her family did not own a “video or DVD player” and she watched Hollywood movies in her neighbour’s apartment. She memorised and practised monologues in front of the mirror, and decided to become an actress when she was 12. In 2002, at the age of 14, she successfully auditioned to join Havana’s National Theater School of Cuba. She hitchhiked or travelled by bus each day to attend the “rigorous” course. While a student there, she filmed three movies. She left the four-year drama course months before presenting her final thesis because Cuban graduates are forbidden from leaving the country without completing three years of mandatory service to the state. At the age of 18, with €200 in savings and Spanish citizenship through her maternal grandparents, de Armas moved to Madrid, Spain to pursue an acting career.

2006–2014: Spanish stardom
As a teenager in her native Cuba, de Armas had a starring role opposite Álex González in Manuel Gutiérrez Aragón’s romantic drama Una rosa de Francia (2006). Cuban actor Jorge Perugorría suggested that the director consider de Armas for the role, after meeting her while attending a birthday party with his daughters. The director visited de Armas’s drama school and interrupted the sixteen-year-old during her audition to inform her that the role was hers. She traveled to Spain as part of a promotional tour for the film and was introduced to Juan Lanja, who would later become her Spanish agent. She then starred in the movie El edén Perdido (2007) and had a supporting role in Fernando Pérez’s Madrigal (2007), filmed at night without the permission of her drama school tutors.

At the age of 18, de Armas moved to Madrid, Spain. Within two weeks of arriving, she met with casting director Luis San Narciso, who had seen her in Una rosa de Francia. He cast her as Carolina in the teen drama El Internado, in which she starred for six seasons from 2007 to 2010. The television show, set in a boarding school, became popular with viewers and made de Armas a celebrity figure in Spain. In a break from filming, she starred in the successful coming-of-age comedy Mentiras y Gordas (2009). Despite the popularity of El Internado, de Armas felt typecast and was mainly offered roles as teenagers. She asked to be written out of the show in its second last season. After spending a few months living in New York to learn English, de Armas was persuaded to return to Spain to star in seventeen episodes of the historical drama Hispania (2010–2011). She then starred in Antonio Trashorras’s horror films El callejón (2011) and Anabel (2015) and in the drama Por un puñado de Besos (2014). During a long period without acting work, de Armas participated in workshops at Tomaz Pandur’s Madrid theatre company and felt “very anxious” about the lack of momentum in her career. With encouragement from her newly hired Hollywood agent, she decided to move to Los Angeles.

2015–2019: Move to Hollywood
When de Armas first arrived in Los Angeles in 2014, she had to start her career again “from scratch.” She spoke very little English and, during the early auditions, she often “didn’t even know what [she] was saying.” She spent four months in full-time education to learn the English language, not wanting to be confined to playing roles specifically written for Latina actresses. She starred opposite Keanu Reeves in her first Hollywood release—Eli Roth’s erotic horror thriller Knock Knock (2015)—and learned her lines phonetically. Reeves then telephoned de Armas to invite her to star in a Spanish-language role in the thriller Exposed (2016), which he acted in and produced. De Armas had a supporting role in Todd Phillips’s War Dogs (2016), acting opposite Miles Teller as the wife of an arms dealer, and again learned her lines phonetically. David Ehrlich of Indiewire found her “memorable in a thankless role”. She starred opposite Édgar Ramírez in the biopic Hands of Stone (2016) as the wife of Panamanian boxer Roberto Durán. Despite its delayed release, Hands of Stone was the first Hollywood movie de Armas filmed. She had been contacted by director Jonathan Jakubowicz while still living in Madrid; he had seen her in El Internado and asked her to travel to Los Angeles to audition for the Spanish-language part. In reviewing the film, Christy Lemire of RogerEbert.com described de Armas as “a hugely charismatic presence. But except for a couple of showy moments, she gets little to do besides function as the dutiful wife.”

In Denis Villeneuve’s futuristic thriller Blade Runner 2049 (2017), de Armas had a supporting role as Joi, the holographic AI girlfriend of Ryan Gosling’s character. Mark Kermode of The Guardian said she “brings three-dimensional warmth to a character who is essentially a digital projection.” Anthony Lane of the New Yorker found her “wondrous”: “Whenever Joi appears, the movie’s imaginative heart begins to race.” While the performance was initially discussed as a breakthrough role, the film underperformed commercially, and de Armas spent much of the following year in her native Cuba, where she bought a house. Also in 2017, she had a supporting role in the action-thriller Overdrive as the love interest of Scott Eastwood’s character. Stephen Dalton of The Hollywood Reporter said she “radiates more kick-ass charisma than her thankless sidekick role might suggest.” In 2018, de Armas starred opposite Demián Bichir in John Hillcoat’s medical drama Corazón. She played a Dominican woman with heart failure in the short film, funded by Montefiore Medical Center to raise awareness of organ donation.

De Armas’s role as an immigrant nurse in the ensemble murder mystery film Knives Out (2019), written and directed by Rian Johnson, was widely praised and marked a breakthrough for the actress. When first approached about the project, she was unenthusiastic about the idea of playing a stereotypical “Latina caretaker” but soon realized that her character was “so much more than that.” Tom Shone of The Times remarked: “The film’s standout performance comes from its least well-known member, the Cuban de Armas, who manages the difficult task of making goodness interesting.” Benjamin Lee of The Guardian said her “striking” performance left a “lasting impression.” The film was a major box office success. De Armas was nominated for the Golden Globe Award for Best Actress – Motion Picture Comedy or Musical and the cast won the National Board of Review Award for Best Cast. While de Armas’s scenes opposite Himesh Patel in the 2019 romantic comedy Yesterday were included in the movie’s trailer, they were deleted from the final cut. The director Danny Boyle said that, while de Armas was “really radiant” in her scenes, the introduction of a love triangle subplot did not test well with audiences.

2020: Multiple film roles
De Armas has six films scheduled for release in the United States in 2020. She had a supporting role in the crime thriller The Informer as the wife of Joel Kinnaman’s character. Guy Lodge of Variety found “her thin role all the more glaring in the wake of her Knives Out stardom.” She appeared as a femme fatale in the noir crime drama The Night Clerk. Brian Tallerico of RogerEbert.com said the movie had “no idea” what to do with her “blinding charisma” while Katie Rife of The AV Club remarked that it would be remembered, “if at all, as a movie de Armas was way too good for.” She starred opposite Wagner Moura in the Netflix biopic Sergio (2020) as Carolina Larrier, a U.N. official and the partner of diplomat Sérgio Vieira de Mello. John DeFore of The Hollywood Reporter found her “magnetic” while Jessica Kiang of Variety said she imbued the part “with an intelligence and will that makes her more than just de Mello’s romantic foil.” De Armas reunited with Moura to play the wife of one of the Cuban Five in Olivier Assayas’s Netflix spy thriller Wasp Network. The movie was shot on location in Cuba; it was de Armas’s first work in her home country since leaving as a teenager. Glenn Kenny of The New York Times found her “superb” while Jay Weissberg of Variety described her as “a joyous, bewitching presence whose career seems destined for the big time.”

In 2021, de Armas will portray Marilyn Monroe in the Netflix biopic Blonde, based on the novel by Joyce Carol Oates. Director Andrew Dominik noticed de Armas’s performance in Knock Knock and, while she went through a long casting process, Dominik promised her the role was hers after the first audition. In preparation for the part, de Armas worked with a dialect coach for a year.