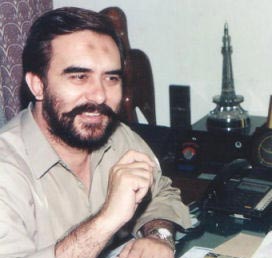 Ansar Burney (Urdu: انصار برنی‎; born 14 August 1956) is a leading Pakistani human and civil rights activist and former caretaker minister in Soomro cabinet in 2007–08. He graduated with Masters in Law from Karachi University. He is widely credited as being the first man to introduce the concept of human rights in Pakistan nearly 40 years ago.

Ansar Burney was born on 14 August 1956 in Karachi, Pakistan. He is the son of the late Syed Mukhtar Ahmed Burney. He graduated with a Masters of Law degree from Karachi University.

Burney was a prominent student leader with the People’s Student Federation in his youth, during the 1970s, and was known to speak out for justice, human dignity, and civil rights. His efforts in the movement landed him in trouble with the military government of the time, and in 1977, at age 20, he was arrested on charges of delivering pro-democracy speeches against martial law and was sentenced to eight months rigorous imprisonment by the Martial Law Court. On his release in 1978, the Martial Law Authorities once again arrested him and sentenced him to prison for a further two months. In 1979, Burney was arrested for a third time and detained for a month.

During his detention in different Pakistani prisons, Burney witnessed, firsthand, the deplorable conditions and met numerous prisoners who had been imprisoned having committed no crime nor having been charged. Some had been in detention for over 40 years without ever appearing in court.

On his release, and the completion of his law degree in 1980, Burney set up the Prisoners Aid Society and the Bureau of Missing and Kidnapped Children in Karachi (Pakistan). He eventually formed Ansar Burney Trust International with offices in Karachi, Islamabad, Peshawar, Mirpur, Quetta, Washington D.C., and London.

The Ansar Burney Trust is a non-governmental, non-political, and nonprofit organisation which initially worked for the welfare of prisoners, reforms in prisons and mental asylums, and to trace missing and kidnapped children. However, it later widened its scope to cover all areas of human rights and worked against human trafficking worldwide.

Lobbying against death penalty in Pakistan

For many years, as a human rights lawyer and expert on the Pakistani legal system, and well aware of its flaws, Burney has appealed to both the Pakistani Supreme Court and various presidents of Pakistan to commute the death sentence of all condemned prisoners to life imprisonment.

As a result of investigations by Burney and his organisation, many condemned to death in Pakistan are in fact either innocent victims of false testimonies or circumstances, or now mentally and physically disabled due to their decades-long confinement in harsh and inhumane conditions within Pakistani prisons.

In 2012, as a direct result of Burney’s petitions, former President of Pakistan Asif Ali Zardari instructed various branches of the Pakistani government to provide advice on the possibility of converting all death sentences in Pakistan into life imprisonment. The president stayed or postponed executions for two years.

However, following the 2014 Peshawar school massacre, Pakistan lifted a moratorium on death penalty. It has to be noted that the moratorium was not put in place as a result of Burney’s actions though he might have affected that earlier decision.

Due to his prominent work, Ansar Burney is widely recognised as the first man to introduce the concept of human rights in Pakistan. In 1991, due to his work and achievements in the field of human rights at a young age, particularly his efforts for prison reforms and release of innocent prisoners, he was awarded the Outstanding Young Person of the World Award by the Junior Chamber International (JCI).

Burney was the first man to receive the Pakistani National Civil Award Sitara-i-Imtiaz on 23 March 2002. This was the first occasion in the history of Pakistan that such an award was awarded in the field of human rights.

In recognition of his two decade international campaign against human trafficking and to end child slavery in the Middle East in the form of child camel jockeys, Burney was declared an Anti-Human Trafficking Hero by the then-United States Secretary of State Condoleezza Rice and in the 2005 Trafficking in Persons Report by the United States Department of State.

For his humanitarian work and efforts to improve people to people relations between Pakistan and India, Burney was in 2008 awarded the Mother Teresa Memorial (International) Award by the Harmony Foundation in the field of Social Justice.

In 2011, due to his untiring efforts for the release of MV Suez and its crew from Somali pirates and his great achievements in the field of human rights for the last three decades, Burney was awarded the prestigious MKRF award by the Mir Khalil-ur-Rahman Foundation.

In 2012, in recognition of his humanitarian work in Pakistan and abroad, Burney was awarded the Diamond Award by the Secretary of State for Wales, Cheryl Gillan MP, on the occasion of the Diamond Jubilee of Elizabeth II.

Ten years after receiving the civil award Sitara-i-Imtiaz, on 14 August 2012, the President of Pakistan Asif Ali Zardari announced the civil award Hilal-i-Imtiaz for Ansar Burney. Burney received this honour on 23 March 2013 at the Presidency in Islamabad.

Ansar Burney has been the recipient of over 250 national and international awards over the last three decades. He received an honorary PhD. in Philosophy from Sri Lanka.[2][34]

He has also got many awards from Pakistan’s institutes, recently he was seen in UET of Lahore.