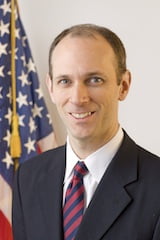 Austan Dean Goolsbee (born August 18, 1969) is ant American economis who is currently the Robert P. Gwinn Professor of Economics at the University of Chicago’s Booth School of Business. Goolsbee formerly served as the Chair of the Council of Economic Advisers, was a member of the cabinet of President Barack Obama and an acting fill-in anchor for WGN-TV in Chicago.

Goolsbee served on the three-member Council of Economic Advisers from the start of the Obama Administration. He advised President Obama during his 2004 U.S. Senate race and was senior economic policy adviser during the 2008 Obama Presidential Campaign. He took over in September 2010 as the Council’s chair, replacing Christina Romer, who had left to return to a teaching position at the University of California at Berkeley. On June 6, 2011, he announced that he was departing the administration and returning to the University of Chicago. In 2013, he became a strategic partner at 32 Advisors, where he leads their Economic Intelligence practice.

In 2019, he endorsed Pete Buttigieg in the 2020 Democratic Party presidential primaries.

Goolsbee was born in Waco, Texas, the son of Linda Catherine (née Dean) and Arthur Leon Goolsbee. He was raised primarily in Whittier, California.

At Yale, Goolsbee was a member of the Yale Political Union, the improv comedy troupe Just Add Water, Skull and Bones, and the Yale Debate Association. He and debate partner David Gray won the American Parliamentary Debate Association National Debate Team of the Year competition in 1991 defeating Ted Cruz who, once Goolsbee graduated, would go on to win in 1992 with partner David Panton. He and partner Dahlia Lithwick were runners up for the award in 1990. As a high school student, Goolsbee won the national championship in International Extemporaneous Speaking (IX) in 1987.

Goolsbee has been a Research Fellow at the American Bar Foundation, Research Associate at the National Bureau of Economic Research in Cambridge, Massachusetts, and a member of the Panel of Economic Advisors to the Congressional Budget Office. He served as Senior Economist to the Progressive Policy Institute (PPI).

Goolsbee’s academic research focuses on the Internet, the new economy, government policy, and taxes. He taught a class on economics and policy in the telecom, media and technology industries. He focuses on human activity in natural settings to find economic explanations for how people behave.

Goolsbee was an award-winning journalist while serving as an academic. Goolsbee is the former host of the television show History’s Business on the History Channel. In April 2006, Goolsbee began writing for the Economic Scene column in The New York Times. This column was later moved to Sundays and renamed the Economic View. Prior to this, he wrote the “Dismal Science” column for Slate.com, for which he won the 2006 Peter Lisagor Award for Exemplary Journalism. He has published scores of papers in various peer-reviewed journals and books.