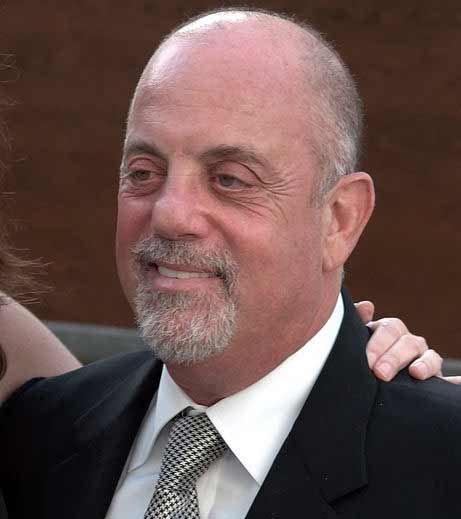 William Martin Joel (born May 9, 1949) is an American singer-songwriter, composer, and pianist. Commonly nicknamed the “Piano Man” after his first major hit and signature song of the same name, he has led a commercially successful career as a solo artist since the 1970s, having released 12 studio albums from 1971 to 1993 as well as one studio album in 2001. He is one of the best-selling music artists of all time, as well as the sixth best-selling recording artist and the third best-selling solo artist in the United States,[4] with over 150 million records sold worldwide. His 1985 compilation album, Greatest Hits Vol. 1 & 2, is one of the best-selling albums in the US.

Joel was born in 1949 in The Bronx, New York, and grew up on Long Island, both places that influenced his music. Growing up, he took piano lessons at the insistence of his mother. After dropping out of high school to pursue a musical career, Joel took part in two short-lived bands, The Hassles and Attila, before signing a record deal with Family Productions and kicking off a solo career in 1971 with his first release, Cold Spring Harbor. In 1972, Joel caught the attention of Columbia Records after a live radio performance of the song “Captain Jack” became popular in Philadelphia, prompting him to sign a new record deal with the company and release his second album, Piano Man, in 1973. After releasing the albums Streetlife Serenade and Turnstiles in 1974 and 1976 respectively, Joel released his critical and commercial breakthrough album, The Stranger, in 1977. This album became Columbia’s best-selling release, selling over 10 million copies and spawning several hit singles, including “Just the Way You Are”, “Movin’ Out (Anthony’s Song)”, “Only the Good Die Young”, and “She’s Always a Woman”; another song on this album, “Scenes from an Italian Restaurant”, is Joel’s favorite of his own songs and has become a staple of his live shows.

Joel’s next album, 52nd Street, was released in 1978 and became his first album to peak at No.1 on the Billboard 200 chart. Joel released his seventh studio album, Glass Houses, in 1980 in an attempt to further establish himself as a rock and roll artist; this release featured “It’s Still Rock and Roll to Me” (Joel’s first single to top the Billboard Hot 100 chart), “You May Be Right”, “Don’t Ask Me Why”, and “Sometimes a Fantasy”. His next album, The Nylon Curtain, was released in 1982, and stemmed from a desire from Joel to create more lyrically and melodically ambitious music. An Innocent Man, released in 1983, served as an homage to genres of music which Joel had grown up with in the 1950s, such as rhythm and blues and doo-wop; this release featured “Uptown Girl” and “The Longest Time”, two of his best-known songs today. After releasing the albums The Bridge and Storm Front in 1986 and 1989 respectively, Joel released his twelfth and final studio album, River of Dreams, in 1993. He went on to release Fantasies and Delusions, a 2001 album featuring classical compositions composed by Joel and performed by British-Korean pianist Richard Hyung-ki Joo. Joel also provided voiceover work in 1988 for the animated Disney film, Oliver & Company, in which he played the character Dodger, and contributed to the soundtracks to several different films, including Easy Money, Ruthless People, and Honeymoon in Vegas.

Across the 20 years of his solo career, Joel produced 33 Top 40 hits in the U.S., all of which he wrote himself, and three of which (“It’s Still Rock and Roll to Me”, “Tell Her About It”, and “We Didn’t Start the Fire”) managed to peak at the top of the Billboard Hot 100 charts. Joel has been nominated for 23 Grammy Awards, winning five of them, including Album of the Year for 52nd Street. Joel was inducted into the Songwriters Hall of Fame (1992), the Rock and Roll Hall of Fame (1999), and the Long Island Music Hall of Fame (2006). In 2001, Joel received the Johnny Mercer Award from the Songwriters Hall of Fame. In 2013, Joel received the Kennedy Center Honors, for influencing American culture through the arts. Since the advent of his solo career, Joel has held a successful touring career, holding live performances across the globe in which he sings several of his written songs. In 1987, he became one of the first artists to hold a rock and roll tour in the Soviet Union following the country’s alleviation of the ban on rock and roll music. Despite largely retiring from writing and releasing pop music following the release of River of Dreams, he continues to tour; he frequently performs at Madison Square Garden in Manhattan. Joel has been in several relationships, including marriages to Elizabeth Weber Small, model Christie Brinkley, and chef Katie Lee; since 2015, he has been married to Alexis Roderick, his fourth spouse. He also has three daughters: Alexa Ray Joel with Brinkley, and Della Rose and Remy Anne with Roderick.

William Martin Joel was born in the Bronx, New York City, New York, on May 9, 1949. When he was one year old, his family moved to the Long Island suburb Hicksville, New York, in the Town of Oyster Bay, where he and his younger sister Judy were raised in a section of Levitt homes.

Joel’s father, Howard (born Helmut) Joel, a classical pianist and businessman, was born in Nuremberg, Germany, to a Jewish family, the son of a merchant and manufacturer, Karl Amson Joel. Helmut was also educated in Switzerland. His father had created a highly successful mail order textile business, Joel Macht Fabrik. To escape the Nazi regime, Helmut’s family emigrated to Switzerland. His father sold his business at a fraction of its value in order to emigrate. The family reached the United States via Cuba, because immigration quotas for German Jews prevented direct immigration at the time. In the United States, Helmut/Howard Joel became an engineer but always loved music. Joel’s mother, Rosalind, was born in Brooklyn, New York City, to Jewish parents, Philip and Rebecca Nyman, who had emigrated from England. ; his maternal family originated from Maidstone in Kent.

Billy Joel’s parents met in the late-1930s at City College of New York at a Gilbert and Sullivan performance.[11] He has said that neither of his parents had talked much about World War II, which were such dark years; it was not until later that he learned more about his father’s family. After Rosalind and Howard Joel divorced in 1957, Howard returned to Europe, as he had never liked the United States, considering the people uneducated and materialistic. He settled in Vienna, Austria, and later remarried. Billy Joel has a half-brother, Alexander Joel, born to his father in Europe, who became a classical conductor there. Alexander Joel was the chief musical director of the Staatstheater Braunschweig from 2001 to 2014.

Joel reluctantly began piano lessons at age four, at his mother’s insistence. His teachers included the noted American pianist Morton Estrin and musician Timothy Ford. Joel says that he is a better organist than pianist. As a teenager, Joel took up boxing so he could defend himself. He boxed successfully on the amateur Golden Gloves circuit for a short time, winning 22 bouts, but abandoned the sport shortly after his nose was broken in his 24th boxing match.

Joel attended Hicksville High School until 1967, but he did not graduate with his class. He had been playing at a piano bar to help support himself, his mother and his sister, and he missed a crucial English exam after playing a late-night gig at a piano bar the evening before. Although Joel was a comparatively strong student, at the end of his senior year he did not have enough credits to graduate. Rather than attend summer school to earn his diploma, Joel decided to begin a career in music: “I told them, ‘To hell with it. If I’m not going to Columbia University, I’m going to Columbia Records, and you don’t need a high school diploma over there’.” In 1992, he submitted essays to the school board in lieu of the missed exam. They were accepted, and he was awarded his diploma at Hicksville High’s annual graduation ceremony 25 years after leaving.

Joel’s first wife was Elizabeth Weber Small. When their relationship began, she was married to Jon Small, his music partner in the short-lived duo Attila, with whom she had a son. When the affair was revealed, Weber (temporarily) severed her relationships with both men. Weber and Joel later married in 1973 and she became his manager. His one-time producer Artie Ripp said Joel’s songs “She’s Got a Way” and “She’s Always a Woman” were inspired by her, as was the waitress character in “Piano Man”. They divorced on July 20, 1982.

Joel married a second time, to model Christie Brinkley, in March 1985. Their daughter, Alexa Ray Joel, was born December 29, 1985. Alexa was given the middle name of Ray after Ray Charles, one of Joel’s musical idols. Joel and Brinkley divorced on August 26, 1994.

On October 2, 2004, Joel married chef Katie Lee, his third wife. At the time of the wedding, Lee was 23 and Joel was 55. Joel’s daughter, Alexa Ray, then 18, served as maid of honor. Joel’s second wife, Christie Brinkley, attended the union and gave the couple her blessing. Lee works as a restaurant correspondent for the PBS show, George Hirsch: Living it Up!. In 2006, Katie Lee hosted Bravo’s Top Chef. She did not return for a second season, instead going on tour with her husband. She began writing a weekly column in Hamptons magazine, and became a field correspondent for the entertainment television show Extra. On June 17, 2009, they announced their separation.

On July 4, 2015, Joel married a fourth time, to Alexis Roderick, an equestrian and former Morgan Stanley executive, at his estate on Long Island. Governor of New York Andrew Cuomo conducted the ceremony.[99] The couple had been together since 2009. On August 12, 2015, the couple’s daughter, Della Rose Joel, was born. The couple had a second daughter, Remy Anne Joel, on October 22, 2017.

Joel has battled depression for many years. In 1970, a career decline and personal tragedies worsened his moods. He left a suicide note and attempted to end his life by drinking furniture polish. Later he said, “I drank furniture polish. It looked tastier than bleach.” His drummer and bandmate, Jon Small, rushed him to the hospital. Joel checked into Meadowbrook Hospital, where he was put on suicide watch and received treatment for depression.

In 1971, Joel released his debut album, Cold Spring Harbor, including the track “Tomorrow Is Today”, related to this incident. Joel later recorded “You’re Only Human (Second Wind)” as a message to help prevent teen suicide.

In 2002, Joel entered Silver Hill Hospital, a substance abuse and psychiatric center in New Canaan, Connecticut. In March 2005, he checked into the Betty Ford Center, where he spent 30 days for the treatment of alcohol abuse.

The contents of this page are sourced from Wikipedia article on 22 July 2020. The contents are available under the CC BY-SA 4.0 license.