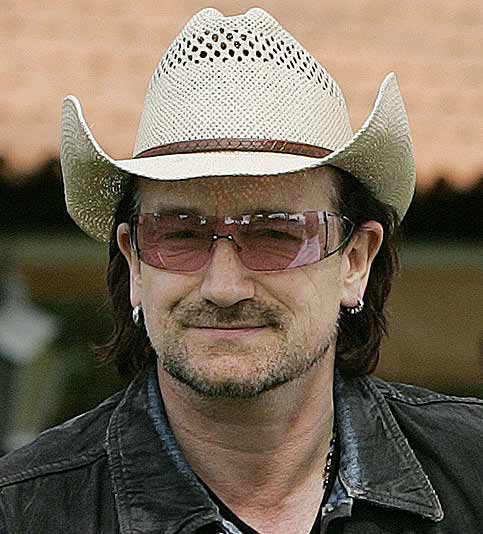 Paul David Hewson, KBE OL (born 10 May 1960), known by his stage name Bono is an Irish singer-songwriter, venture capitalist, businessman, and philanthropist. He is best known as the lead vocalist and primary lyricist of rock band U2.

Born and raised in Dublin, Ireland, he attended Mount Temple Comprehensive School where he met his future wife, Alison Stewart, as well as schoolmates with whom he formed U2 in 1976. Bono soon established himself as a passionate frontman for the band through his expressive vocal style and grandiose gestures and songwriting. His lyrics are known for their social and political themes, and for their religious imagery inspired by his Christian beliefs. During U2’s early years, Bono’s lyrics contributed to the group’s rebellious and spiritual tone. As the band matured, his lyrics became inspired more by personal experiences shared with the other members. As a member of U2, Bono has received 22 Grammy Awards and has been inducted into the Rock and Roll Hall of Fame.

Bono is well known for his activism for social justice causes, both through U2 and as an individual. He is particularly active in campaigning for Africa, for which he co-founded DATA, EDUN, the ONE Campaign, and Product Red. In pursuit of these causes, he has participated in benefit concerts and met with influential politicians. Bono has been praised for his philanthropic efforts; he was granted an honorary knighthood by Elizabeth II of the United Kingdom for “his services to the music industry and for his humanitarian work”, and has been made a Commandeur of the French Ordre des Arts et des Lettres (Order of Arts and Letters). In 2005, Bono was named one of the Time Persons of the Year.

Outside the band, he has recorded with numerous artists. He has collaborated with U2 bandmate the Edge on several projects, including: songs for Roy Orbison and Tina Turner; the soundtracks to the musical Spider-Man: Turn Off the Dark and a London stage adaptation of A Clockwork Orange; and the refurbishment of the Clarence Hotel in Dublin. He is managing director and a managing partner of the private equity firm Elevation Partners, which has invested in several companies.

Bono was born in the Rotunda Hospital, Dublin, on 10 May 1960. He was raised in the Northside suburb of Finglas with his brother (who is eight years older than Bono) by their mother, Iris (née Rankin), a member of the Church of Ireland, and their father, Brendan Robert “Bob” Hewson, a Roman Catholic. His parents initially agreed that the first child would be raised Anglican and the second Catholic. Although Bono was the second child, he also attended Church of Ireland services with his mother and brother. Bono’s teenage musical idols were Bob Dylan, Leonard Cohen, David Bowie and Marc Bolan of T. Rex.

He went to the local primary Glasnevin National School. Bono’s mother died on 10 September 1974, after suffering a cerebral aneurysm at her father’s funeral. Many U2 songs, including “I Will Follow”, “Mofo”, “Out of Control”, “Lemon” and “Tomorrow” focus on the loss of his mother.

Bono attended Mount Temple Comprehensive School, a multi-denominational school in Clontarf. During his childhood and adolescence, Bono and his friends were part of a surrealist street gang called “Lypton Village”. Bono met one of his closest friends, Guggi, in Lypton Village. The gang had a ritual of nickname-giving. Bono had several names: first, he was “Steinhegvanhuysenolegbangbangbang”, then just “Huyseman”, followed by “Houseman”, “Bon Murray”, “Bono Vox of O’Connell Street”, and finally just “Bono”. “Bono Vox” is an alteration of Bonavox, a Latin phrase which translates to “good voice”. It is said he was nicknamed “Bono Vox” by his friend Gavin Friday. He initially disliked the name; however, when he learned it translated to “good voice”, he accepted it. Hewson has been known as “Bono” since the late 1970s. Although he uses Bono as his stage name, close family and friends also refer to him as Bono, including fellow band members.

After he left school, his father Bob Hewson told him he could live at home for one year, but if he was not able to pay his own way, he would have to leave the house.

Bono was a close friend to INXS frontman Michael Hutchence.

Bono is almost never seen in public without sunglasses, as he suffers from glaucoma. During a Rolling Stone interview, he stated:

[I have] very sensitive eyes to light. If somebody takes my photograph, I will see the flash for the rest of the day. My right eye swells up. I’ve a blockage there, so that my eyes go red a lot. So it’s part vanity, it’s part privacy and part sensitivity.

In the late 1980s or early 1990s, Bono bought a top-floor duplex apartment in Manhattan’s San Remo apartment building from Steve Jobs for $15 million. Jobs had renovated it for his own use, but never moved in. In 2004, Bono was given an honorary Doctor of Laws degree from the University of Pennsylvania.

Bono was named one of the 17 Irish artists to be proud of by the Irish Post on 9 April 2013. Time magazine ranked him at the 8th place on its list of the “Most Influential Celebrities” in 2013; he was the only person from the music industry in the Top 10.

Bono’s work as an activist, which is due largely to his Christian beliefs, began in earnest when, inspired by Live Aid, he travelled to Ethiopia to work in a feeding camp with his wife Alison and the charity World Vision, an Evangelical Christian humanitarian aid, development, and advocacy organisation. With regard to Bono’s 2013 declarations in interviews published and videotaped of his faith in Jesus Christ, he states that Christ was either who he said he was, or he is “a complete and utter nutcase”. As early as 2005, Bono was invoking this argument, identified as the “Lewis trilemma”.

In May 2010, Bono suffered a spinal injury while preparing for a U2 tour, and was taken to a German clinic in Munich for emergency neurosurgery. The North American leg of the tour was postponed and rescheduled for 2011.

On 16 November 2014, Bono was involved in a “high energy bicycle accident” when he attempted to avoid another rider. Bono was rushed to NewYork–Presbyterian Hospital/Weill Cornell Medical Center’s Emergency Department and underwent “multiple X-rays and CAT scans” followed by five hours of surgery. Bono suffered fractures of the shoulder blade, humerus, orbit and pinky finger. Orthopedic trauma surgeon Dean Lorich, MD, stated that “[Bono] was taken urgently to the operating room… where the elbow was washed out and debrided, a nerve trapped in the break was moved and the bone was repaired with three metal plates and 18 screws.” Bono posted to U2’s official website, “As I write this, it is not clear that I will ever play guitar again,” as reported in Cycling Weekly.

In 2016, during the recording sessions for U2’s album Songs of Experience, Bono had what the Edge called a “brush with mortality”. The Irish Times reported that sometime in late 2016 between Christmas and New Year’s Day, Bono had a near-death experience. Other than clarifying that it was a physical health scare, he declined to elaborate any further on what happened. As a result of the episode, he decided to rework the album’s lyrics.