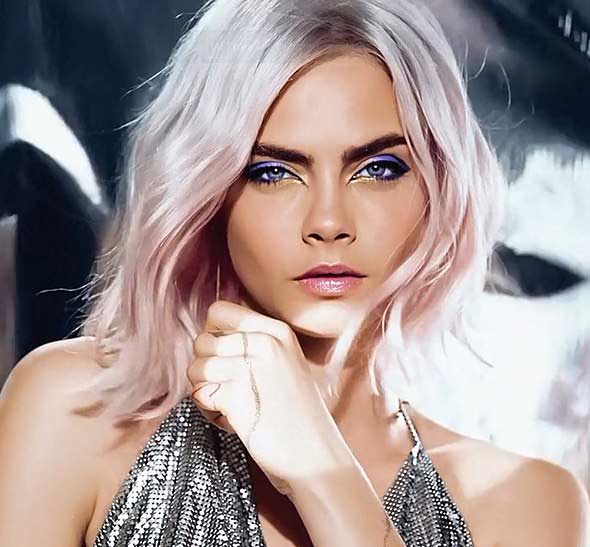 Cara Jocelyn Delevingne born 12 August 1992 is an English model, actress, and singer. She signed with Storm Management after leaving school in 2009. Delevingne won Model of the Year at the British Fashion Awards in 2012 and 2014.

Delevingne started her acting career with a minor role in the 2012 film adaptation of Anna Karenina. Her most notable roles include Margo Roth Spiegelman in the romantic mystery film Paper Towns (2015), the Enchantress in the comic book film Suicide Squad (2016), and Laureline in Luc Besson’s Valerian and the City of a Thousand Planets (2017).

Cara Jocelyn Delevingne was born on 12 August 1992, in Hammersmith, London, the daughter of Pandora Anne Delevigne (née Stevens) and property developer Charles Hamar Delevingne. She grew up in Belgravia, London. She has two older sisters, Chloe and Poppy Delevingne, and a paternal half-brother, Alex Jaffe. Delevingne attended Francis Holland School for Girls in central London until she was 16 before moving to Bedales School in Steep, Hampshire. She has dyspraxia and found school challenging. In June 2015, in an interview with Vogue, Delevingne talked about her battle with depression when she was 15: “I was hit with a massive wave of depression and anxiety and self-hatred, where the feelings were so painful that I would slam my head against a tree to try to knock myself out.” At 16, after completing her GCSEs, she moved to Bedales School in Hampshire to focus on drama and music. After one year, she dropped out and followed her sister Poppy into modelling.

Delevingne is a self-described animal lover. Following the killing of Cecil the lion in 2015, she auctioned off her personal TAG Heuer watch in aid of wildlife conservation, raising £18,600 for WildCRU.

At the Women in the World summit in October 2015, Delevingne spoke about her battle with depression, which began at age 15, when she discovered her mother’s drug addiction. The following year, she left school for six months and agreed to go on medication, which she said may have saved her life. In 2017, on This Morning, she revealed that she also has ADHD.

Delevingne has multiple tattoos. Her first tattoo was a lion on her finger, representing her zodiac sign of Leo. She has a tattoo of her lucky number, the Roman numeral XII, on her side under her right arm, and “MADE IN ENGLAND” on the sole of her left foot. She has said that her most important tattoo is the elephant on her right arm, in memory of her late grandmother. Her initials “CJD” are on her hand. She also has a diamond on her ear and a Southern cross around her ear; a white dove on her finger; “silence” on her wrist; a sak yant on her back; a snake on her hand; a pair of eyes on her neck; a coat of arms on her ribcage; her mother’s name on her biceps muscle; “breathe deep” on her other biceps; “bacon…” under her foot; a DD monogram on her hip, symbolizing her friendship with fellow model Jourdan Dunn; a wasp on her finger; “don’t worry be happy” on her sternum; a heart on her finger; and a smiley face on her toe.