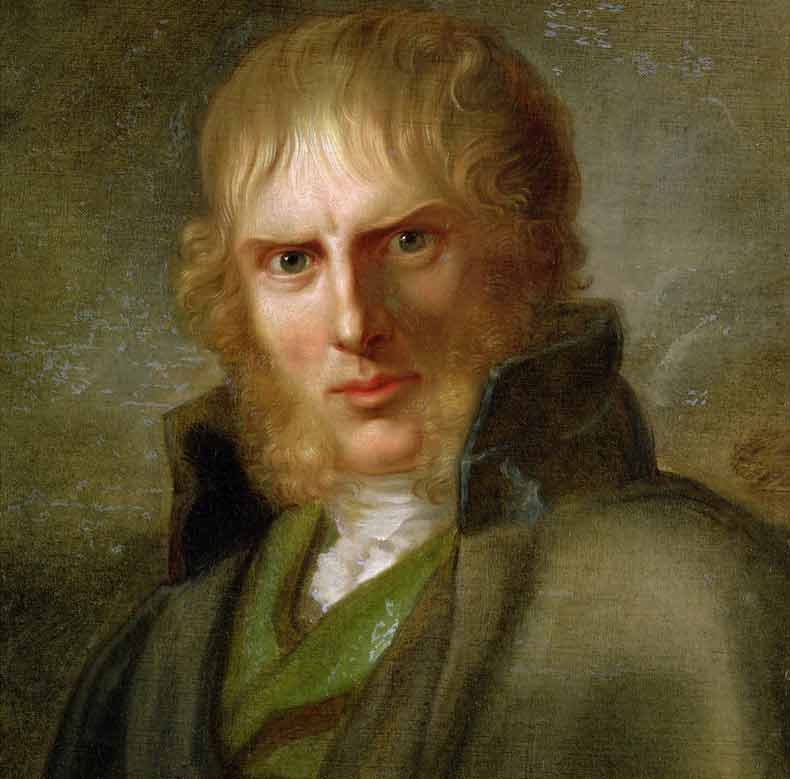 Caspar David Friedrich (5 September 1774 – 7 May 1840) was a 19th-century German Romantic landscape painter, generally considered the most important German artist of his generation. He is best known for his mid-period allegorical landscapes which typically feature contemplative figures silhouetted against night skies, morning mists, barren trees or Gothic ruins. His primary interest was the contemplation of nature, and his often symbolic and anti-classical work seeks to convey a subjective, emotional response to the natural world. Friedrich’s paintings characteristically set a human presence in diminished perspective amid expansive landscapes, reducing the figures to a scale that, according to the art historian Christopher John Murray, directs “the viewer’s gaze towards their metaphysical dimension”.

Friedrich was born in the town of Greifswald on the Baltic Sea in what was at the time Swedish Pomerania. He studied in Copenhagen until 1798, before settling in Dresden. He came of age during a period when, across Europe, a growing disillusionment with materialistic society was giving rise to a new appreciation of spirituality. This shift in ideals was often expressed through a reevaluation of the natural world, as artists such as Friedrich, J. M. W. Turner and John Constable sought to depict nature as a “divine creation, to be set against the artifice of human civilization”.

Friedrich’s work brought him renown early in his career, and contemporaries such as the French sculptor David d’Angers spoke of him as a man who had discovered “the tragedy of landscape”. Nevertheless, his work fell from favour during his later years, and he died in obscurity. As Germany moved towards modernisation in the late 19th century, a new sense of urgency characterised its art, and Friedrich’s contemplative depictions of stillness came to be seen as the products of a bygone age. The early 20th century brought a renewed appreciation of his work, beginning in 1906 with an exhibition of thirty-two of his paintings in Berlin. By the 1920s his paintings had been discovered by the Expressionists, and in the 1930s and early 1940s Surrealists and Existentialists frequently drew ideas from his work. The rise of Nazism in the early 1930s again saw a resurgence in Friedrich’s popularity, but this was followed by a sharp decline as his paintings were, by association with the Nazi movement, interpreted as having a nationalistic aspect. It was not until the late 1970s that Friedrich regained his reputation as an icon of the German Romantic movement and a painter of international importance.

Caspar David Friedrich was born on 5 September 1774, in Greifswald, Swedish Pomerania, on the Baltic coast of Germany. The sixth of ten children, he was raised in the strict Lutheran creed of his father Adolf Gottlieb Friedrich, a candle-maker and soap boiler. Records of the family’s financial circumstances are contradictory; while some sources indicate the children were privately tutored, others record that they were raised in relative poverty. He became familiar with death from an early age. His mother, Sophie, died in 1781 when he was seven. A year later, his sister Elisabeth died, and a second sister, Maria, succumbed to typhus in 1791. Arguably the greatest tragedy of his childhood happened in 1787 when his brother Johann Christoffer died: at the age of thirteen, Caspar David witnessed his younger brother fall through the ice of a frozen lake, and drown. Some accounts suggest that Johann Christoffer perished while trying to rescue Caspar David, who was also in danger on the ice.

Friedrich began his formal study of art in 1790 as a private student of artist Johann Gottfried Quistorp at the University of Greifswald in his home city, at which the art department is now named Caspar-David-Friedrich-Institut in his honour. Quistorp took his students on outdoor drawing excursions; as a result, Friedrich was encouraged to sketch from life at an early age. Through Quistorp, Friedrich met and was subsequently influenced by the theologian Ludwig Gotthard Kosegarten, who taught that nature was a revelation of God. Quistorp introduced Friedrich to the work of the German 17th-century artist Adam Elsheimer, whose works often included religious subjects dominated by landscape, and nocturnal subjects. During this period he also studied literature and aesthetics with Swedish professor Thomas Thorild. Four years later Friedrich entered the prestigious Academy of Copenhagen, where he began his education by making copies of casts from antique sculptures before proceeding to drawing from life. Living in Copenhagen afforded the young painter access to the Royal Picture Gallery’s collection of 17th-century Dutch landscape painting. At the Academy he studied under teachers such as Christian August Lorentzen and the landscape painter Jens Juel. These artists were inspired by the Sturm und Drang movement and represented a midpoint between the dramatic intensity and expressive manner of the budding Romantic aesthetic and the waning neo-classical ideal. Mood was paramount, and influence was drawn from such sources as the Icelandic legend of Edda, the poems of Ossian and Norse mythology.