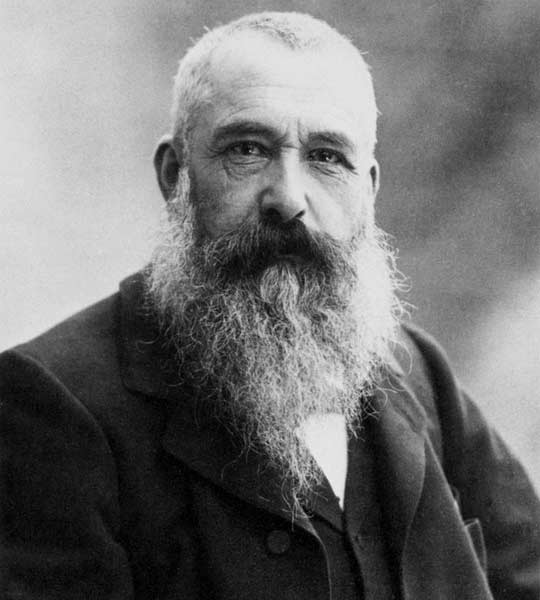 Oscar-Claude Monet (14 November 1840 – 5 December 1926) was a French painter, a founder of French Impressionist painting and the most consistent and prolific practitioner of the movement’s philosophy of expressing one’s perceptions before nature, especially as applied to plein air landscape painting. The term “Impressionism” is derived from the title of his painting Impression, soleil levant (Impression, Sunrise), which was exhibited in 1874 in the first of the independent exhibitions mounted by Monet and his associates as an alternative to the Salon de Paris.

Monet’s ambition of documenting the French countryside led him to adopt a method of painting the same scene many times in order to capture the changing of light and the passing of the seasons.[6] From 1883, Monet lived in Giverny, where he purchased a house and property and began a vast landscaping project which included lily ponds that would become the subjects of his best-known works. He began painting the water lilies in 1899, first in vertical views with a Japanese bridge as a central feature and later in the series of large-scale paintings that was to occupy him continuously for the next 20 years of his life.

Claude Monet was born on 14 November 1840 on the fifth floor of 45 rue Laffitte, in the 9th arrondissement of Paris. He was the second son of Claude Adolphe Monet and Louise Justine Aubrée Monet, both of them second-generation Parisians. On 20 May 1841, he was baptized in the local parish church, Notre-Dame-de-Lorette, as Oscar-Claude, but his parents called him simply Oscar. (He signed his juvenilia “O. Monet”.) Despite being baptized Catholic, Monet later became an atheist.

In 1845, his family moved to Le Havre in Normandy. His father wanted him to go into the family’s ship-chandling and grocery business, but Monet wanted to become an artist. His mother was a singer, and supported Monet’s desire for a career in art.

On 1 April 1851, Monet entered Le Havre secondary school of the arts. Locals knew him well for his charcoal caricatures, which he would sell for ten to twenty francs. Monet also undertook his first drawing lessons from Jacques-François Ochard, a former student of Jacques-Louis David. On the beaches of Normandy around 1856 he met fellow artist Eugène Boudin, who became his mentor and taught him to use oil paints. Boudin taught Monet “en plein air” (outdoor) techniques for painting. Both were influenced by Johan Barthold Jongkind.

On 28 January 1857, his mother died. At the age of sixteen, he left school and went to live with his widowed, childless aunt, Marie-Jeanne Lecadre.