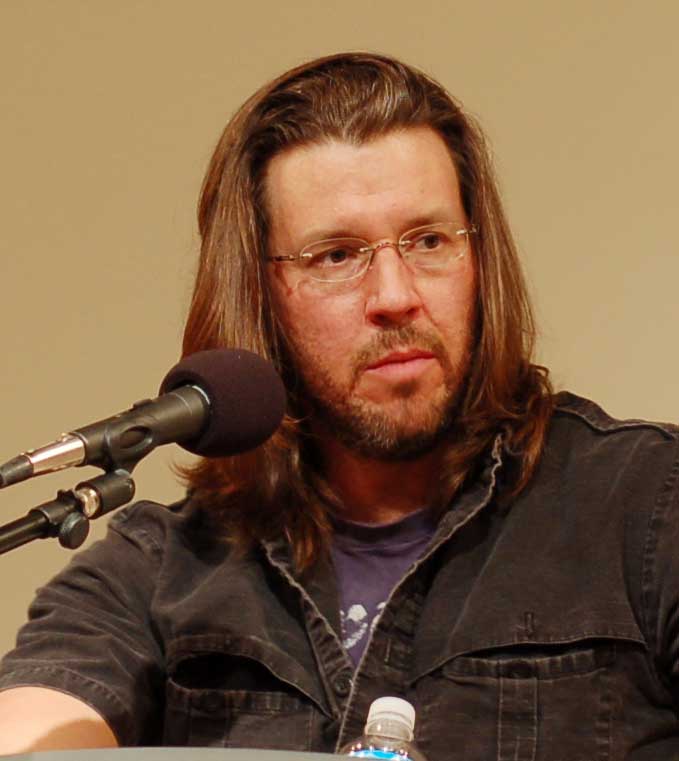 David Foster Wallace (February 21, 1962 – September 12, 2008) was an American author of novels, short stories and essays, as well as a university professor of English and creative writing. Wallace is widely known for his 1996 novel Infinite Jest, which Time magazine cited as one of the 100 best English-language novels from 1923 to 2005. His posthumous novel, The Pale King (2011), was a finalist for the Pulitzer Prize for Fiction in 2012.

The Los Angeles Times’s David Ulin called Wallace “one of the most influential and innovative writers of the last twenty years”. Among the writers who have cited Wallace as an influence are Dave Eggers, Zadie Smith, Jonathan Franzen, Elizabeth Wurtzel, George Saunders, Rivka Galchen, John Green, Matthew Gallaway, David Gordon, Darin Strauss, Charles Yu, Porochista Khakpour, and Deb Olin Unferth. Wallace died by suicide at age 46 after struggling with depression for many years.

David Foster Wallace was born in Ithaca, New York, to Sally Jean Wallace (née Foster) and James Donald Wallace, and was raised in Champaign-Urbana, Illinois along with his younger sister, Amy Wallace-Havens. From fourth grade, Wallace lived with his family in Urbana, where he attended Yankee Ridge Elementary School and Urbana High School. His father was a philosophy professor at the University of Illinois at Urbana–Champaign. His mother was an English professor at Parkland College, a community college in Champaign, which recognized her work with a “Professor of the Year” award in 1996.

As an adolescent, Wallace was a regionally ranked junior tennis player, an experience he wrote about in the essay “Derivative Sport in Tornado Alley”, originally published in Harper’s Magazine as “Tennis, Trigonometry, Tornadoes”. Although his parents were atheists, Wallace twice attempted to join the Roman Catholic Church, but “flunk[ed] the period of inquiry”; he later attended a Mennonite church.

By the time he graduated, with his honors thesis in English becoming the manuscript of his first novel, The Broom of the System (1987), Wallace had committed to being a writer. He told David Lipsky: “Writing [The Broom of the System], I felt like I was using ninety-seven percent of me, whereas philosophy was using fifty percent.” Wallace completed a Master of Fine Arts degree in creative writing at the University of Arizona in 1987. He then moved to Massachusetts to attend graduate school in philosophy at Harvard University, but soon left the program.

In the early 1990s, Wallace was in a relationship with writer Mary Karr, who had split with her husband. Karr later described Wallace as obsessive about her and the relationship as volatile, with Wallace once throwing a coffee table at her and once forcing her out of a car, leaving her to walk home. She has complained that Wallace’s biographer D. T. Max underreported Wallace’s abuse. Of Max’s account of their relationship, she tweeted, “that’s about 2% of what happened. tried to buy a gun. kicked me. climbed up the side of my house at night. followed my son age 5 home from school. had to change my number twice, and he still got it. months and months it went on.” Several scholars and writers noted that Max’s biography did, in fact, cover the abuse and did not ignore the allegations Karr later reiterated on Twitter.

Wallace struggled with depression, alcoholism, drug addiction, and suicidal tendencies, with recurrent psychiatric hospitalizations. In 1989, he spent four weeks at McLean Hospital—a psychiatric institute in Belmont, Massachusetts, affiliated with the Harvard Medical School—where he successfully completed a drug and alcohol detox program. He later said his time there changed his life.

Dogs were important to Wallace, and he spoke of opening a shelter for stray canines. According to his friend Jonathan Franzen, he “had a predilection for dogs who’d been abused, and [were] unlikely to find other owners who were going to be patient enough for them.”