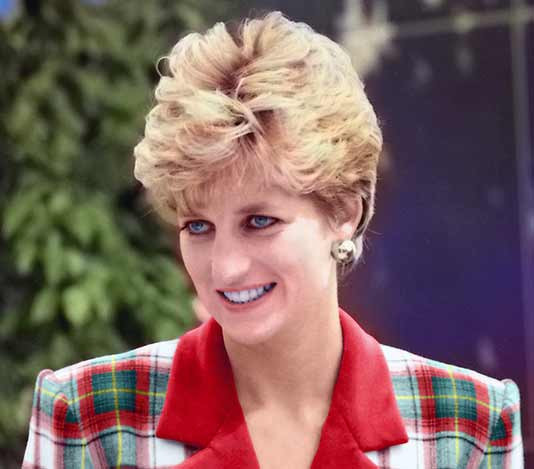 Diana, Princess of Wales (born Diana Frances Spencer; 1 July 1961 – 31 August 1997) was a member of the British royal family. She was the first wife of Charles, Prince of Wales, the heir apparent to the British throne, and the mother of Prince William and Prince Harry. Diana’s activism and glamour made her an international icon and earned her an enduring popularity as well as an unprecedented public scrutiny, exacerbated by her tumultuous private life.

Diana was born into the British nobility and grew up close to the royal family on their Sandringham estate. The youngest daughter of John Spencer, 8th Earl Spencer, and Frances Shand Kydd, she was strongly affected by their divorce in 1967. She did not distinguish herself academically, but was talented in music, dance, and sports. In 1978, she moved to London, where she lived with flatmates and took on various low-paying jobs.

Diana came to prominence in 1981 upon her engagement to Prince Charles, the eldest son of Queen Elizabeth II, after a brief courtship. Their wedding took place at St Paul’s Cathedral in 1981 and made her Princess of Wales, a role in which she was enthusiastically received by the public. The couple had two sons, the princes William and Harry, who were then second and third in the line of succession to the British throne. Diana’s marriage to Charles, however, suffered due to their incompatibility and extramarital affairs. The couple separated in 1992, soon after the breakdown of their relationship became public knowledge. The details of their marital difficulties became increasingly publicised, and the marriage ended in divorce in 1996.

As Princess of Wales, Diana undertook royal duties on behalf of the Queen and represented her at functions across the Commonwealth realms. She was celebrated in the media for her unconventional approach to charity work. Her patronages initially centred on children and youth but she later became known for her involvement with AIDS patients and campaign for the removal of landmines. She also raised awareness and advocated ways to help people affected with cancer and mental illness. As princess, Diana was initially noted for her shyness, but her charisma and friendliness endeared her to the public and helped her reputation survive the acrimonious collapse of her marriage. Considered to be very photogenic, she was a leader of fashion in the 1980s and 1990s. Media attention and public mourning were extensive after her death in a car crash in a Paris tunnel in 1997 and subsequent televised funeral. Her legacy has had a deep impact on the royal family and British society.

Diana Frances Spencer was born on 1 July 1961 at Park House, Sandringham, Norfolk. She was the fourth of five children of John Spencer, Viscount Althorp (1924–1992), and Frances Spencer, Viscountess Althorp (née Roche; 1936–2004). The Spencer family had been closely allied with the British royal family for several generations; Diana’s grandmothers, Cynthia Spencer, Countess Spencer and Ruth Roche, Baroness Fermoy, had served as ladies-in-waiting to Queen Elizabeth The Queen Mother. The Spencers were hoping for a boy to carry on the family line, and no name was chosen for a week, until they settled on Diana Frances, after her mother and after Lady Diana Spencer, a many-times-great-aunt who was also a prospective Princess of Wales.

On 30 August 1961, Diana was baptised at St. Mary Magdalene Church, Sandringham. She grew up with three siblings: Sarah, Jane, and Charles. Her infant brother, John, died shortly after his birth one year before Diana was born. The desire for an heir added strain to the Spencers’ marriage, and Lady Althorp was reportedly sent to Harley Street clinics in London to determine the cause of the “problem”. The experience was described as “humiliating” by Diana’s younger brother, Charles: “It was a dreadful time for my parents and probably the root of their divorce because I don’t think they ever got over it.” Diana grew up in Park House, situated on the Sandringham estate. The Spencers leased the house from its owner, Queen Elizabeth II. The royal family frequently holidayed at the neighbouring Sandringham House, and Diana played with the Queen’s sons Prince Andrew and Prince Edward.

Diana was seven years old when her parents divorced. Her mother later began a relationship with Peter Shand Kydd and married him in 1969. Diana lived with her mother in London during her parents’ separation in 1967, but during that year’s Christmas holidays, Lord Althorp refused to let Diana return to London with Lady Althorp. Shortly afterwards he won custody of Diana with support from his former mother-in-law, Lady Fermoy. In 1976, Lord Althorp married Raine, Countess of Dartmouth. Diana’s relationship with her stepmother was particularly bad. She resented Raine, whom she called a “bully”, and on one occasion Diana “pushed her down the stairs”. She later described her childhood as “very unhappy” and “very unstable, the whole thing”. Diana became known as Lady Diana after her father later inherited the title of Earl Spencer in 1975, at which point her father moved the entire family from Park House to Althorp, the Spencer seat in Northamptonshire.

Diana was initially home-schooled under the supervision of her governess, Gertrude Allen. She began her formal education at Silfield Private School in Gayton, Norfolk, and moved to Riddlesworth Hall School, an all-girls boarding school near Thetford, when she was nine. She joined her sisters at West Heath Girls’ School in Sevenoaks, Kent, in 1973. She did not shine academically, failing her O-levels twice. Her outstanding community spirit was recognised with an award from West Heath. She left West Heath when she was sixteen. Her brother Charles recalls her as being quite shy up until that time. She showed a talent for music as an accomplished pianist. Diana also excelled in swimming and diving, and studied ballet and tap dance.

After attending Institut Alpin Videmanette (a finishing school in Rougemont, Switzerland) for one term, and leaving after the Easter term of 1978, Diana returned to London, where she shared her mother’s flat with two school friends. In London, she took an advanced cooking course, but seldom cooked for her roommates. She took a series of low-paying jobs; she worked as a dance instructor for youth until a skiing accident caused her to miss three months of work. She then found employment as a playgroup pre-school assistant, did some cleaning work for her sister Sarah and several of her friends, and acted as a hostess at parties. Diana spent time working as a nanny for the Robertsons, an American family living in London, and worked as a nursery teacher’s assistant at the Young England School in Pimlico. In July 1979, her mother bought her a flat at Coleherne Court in Earl’s Court as an 18th birthday present. She lived there with three flatmates until 25 February 1981.

Lady Diana first met Charles, Prince of Wales, the Queen’s eldest son and heir apparent, when she was 16 in November 1977. He was then dating her older sister, Lady Sarah. They were guests at a country weekend during the summer of 1980 when she watched him play polo and he took a serious interest in Diana as a potential bride. The relationship progressed when he invited her aboard the royal yacht Britannia for a sailing weekend to Cowes. This was followed by an invitation to Balmoral (the royal family’s Scottish residence) to meet his family one weekend in November 1980. Lady Diana was well received by the Queen, the Queen Mother and the Duke of Edinburgh. Prince Charles subsequently courted Diana in London. The Prince proposed on 6 February 1981, and Lady Diana accepted, but their engagement was kept secret for the next few weeks.

After her 1996 divorce, Diana retained the double apartment on the north side of Kensington Palace that she had shared with the Prince of Wales since the first year of their marriage; the apartment remained her home until her death the following year. She also moved her offices to Kensington Palace but was permitted “to use the state apartments at St James’s Palace”. Furthermore, she continued to have access to the jewellery that she had received during her marriage, and was allowed to use the air transport of the British royal family and government. In a book published in 2003, Paul Burrell claimed the Princess’s private letters had revealed that her brother, Lord Spencer, had refused to allow her to live at Althorp, despite her request.

Diana dated the British-Pakistani heart surgeon Hasnat Khan, who was called “the love of her life” by many of her closest friends after her death, and she is said to have described him as “Mr Wonderful”. In May 1996, Diana visited Lahore upon invitation of Imran Khan, a relative of Hasnat Khan, and visited the latter’s family in secret. Khan was intensely private and the relationship was conducted in secrecy, with Diana lying to members of the press who questioned her about it. Their relationship lasted almost two years with differing accounts of who ended it. She is said to have spoken of her distress when “he” ended their relationship. However, according to Khan’s testimonial at the inquest for her death, it was Diana who ended their relationship in the summer of 1997. Burrell also said the relationship was ended by the Princess in July 1997. Burrell also claimed that Diana’s mother, Frances Shand Kydd, disapproved of her daughter’s relationship with a Muslim man.

Within a month, Diana began a relationship with Dodi Fayed, the son of her summer host, Mohamed Al-Fayed. That summer, Diana had considered taking her sons on a holiday to the Hamptons on Long Island, New York, but security officials had prevented it. After deciding against a trip to Thailand, she accepted Fayed’s invitation to join his family in the south of France, where his compound and large security detail would not cause concern to the Royal Protection squad. Mohamed Al-Fayed bought the Jonikal, a 60-metre multimillion-pound yacht on which to entertain Diana and her sons.

On 31 August 1997, Diana died in a car crash in the Pont de l’Alma tunnel in Paris while the driver was fleeing the paparazzi. The crash also resulted in the deaths of her companion Dodi Fayed and the driver, Henri Paul, who was the acting security manager of the Hôtel Ritz Paris. Diana’s bodyguard, Trevor Rees-Jones, survived the crash. The televised funeral, on 6 September, was watched by a British television audience that peaked at 32.10 million, which was one of the United Kingdom’s highest viewing figures ever. Millions more watched the event around the world.

Diana was born into the British Spencer family, different branches of which hold the titles of Duke of Marlborough, Earl Spencer, Earl of Sunderland, and Baron Churchill. The Spencers claimed descent from a cadet branch of the powerful medieval Despenser family, but its validity is questioned. Her great-grandmother was Margaret Baring, a member of the German-British Baring family of bankers and the daughter of Edward Baring, 1st Baron Revelstoke. Diana’s distant noble ancestors included the first Duke and Duchess of Marlborough. Diana and Charles were distantly related, as they were both descended from the House of Tudor through Henry VII of England. She was also descended from the House of Stuart through Charles II of England by Charles Lennox, 1st Duke of Richmond, and Henry FitzRoy, 1st Duke of Grafton, and his brother James II of England by Henrietta FitzJames. Other noble ancestors include Margaret Kerdeston, granddaughter of Michael de la Pole, 2nd Earl of Suffolk; Robert Devereux, 2nd Earl of Essex, an English nobleman and a favourite of Elizabeth I of England; and Edward Seymour, 1st Duke of Somerset, a descendant of Edward III of England through his son Lionel of Antwerp, 1st Duke of Clarence. Diana’s Scottish roots came from her maternal grandmother, Lady Fermoy. Among her Scottish ancestors were Alexander Gordon, 4th Duke of Gordon, and his wife Jane, and Archibald Campbell, 9th Earl of Argyll.