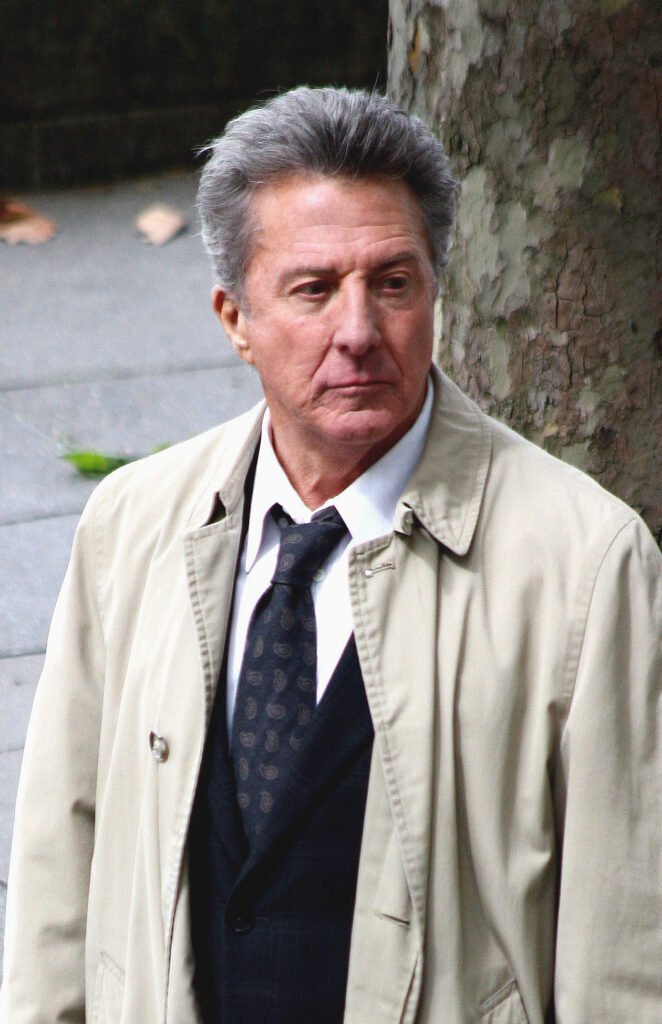 Dustin Lee Hoffman (born August 8, 1937) is an American actor and filmmaker. He is known for his versatile portrayals of antiheroes and emotionally vulnerable characters. Actor Robert De Niro described him as “an actor with the everyman’s face who embodied the heartbreakingly human”. At a young age Hoffman knew he wanted to study in the arts and entered into the Los Angeles Conservatory of Music and later he would decide to go into acting where he trained at the Pasadena Playhouse in Los Angeles. His first theatrical performance was 1961’s A Cook for Mr. General as Ridzinski. During that time he appeared in several guest roles on television in shows like Naked City and The Defenders. He then starred in the 1966 Off-Broadway play Eh? where his performance garnered him both a Theatre World Award and Drama Desk Award.

His breakthrough role was as Benjamin Braddock in the Mike Nichols’ critically acclaimed and iconic film The Graduate (1967) where he received his first Academy Award nomination. His next role was “Ratzo” Rizzo in John Schlesinger’s Midnight Cowboy (1969), where he acted alongside Jon Voight where they both received Oscar nominations, and the film went on to win the Academy Award for Best Picture. He gained success in the 1970’s playing roles that shaped the craft of his acting abilities, crossing genres effortlessly in the western Little Big Man (1971), the prison drama Papillon (1973), playing controversial and groundbreaking comedian in Bob Fosse’s Lenny (1975), Marathon Man alongside Laurence Olivier (1976), and as Carl Bernstein investigating the Watergate scandal in All the President’s Men (1976). In 1979, Hoffman starred in the family drama Kramer vs. Kramer alongside Meryl Streep. They both received Academy Awards for their performances.

After a three year break from films Hoffman returned in Sydney Pollack’s showbusiness comedy Tootsie (1982) about a struggling actor who pretends to be a woman in order to get an acting role. He returned to stage acting with a 1984 performance as Willy Loman in Death of a Salesman and reprised the role a year later in a television film earning a Primetime Emmy Award. In 1987 he starred alongside Warren Beatty in Elaine May’s comedy Ishtar He won his second Academy Award for Best Actor for his portrayal of the autistic savant Ray Babbitt in the 1988 film Rain Man, co-starring Tom Cruise. In 1989, he was nominated for a Tony Award and a Drama Desk Award for playing Shylock in a stage performance of The Merchant of Venice. In the 1990s, he made appearances in such film as Warren Beatty’s action comedy adaptation Dick Tracy (1990), Steven Spielberg’s Hook (1991) as Captain Hook, medical disaster Outbreak (1995), legal crime drama Sleepers (1996) and the satirical black comedy Wag the Dog (1997) alongside Robert De Niro.

In the 21st century, Hoffman has appeared in films such as Finding Neverland (2004), I Heart Huckabees (2004), Stranger than Fiction (2006), as well as the Meet the Fockers (2004) and Little Fockers (2010). Hoffman has done voice work for The Tale of Despereaux (2008) and the Kung Fu Panda film series (2008-2016). In 2012, he made his directorial debut with Quartet starring Maggie Smith and Tom Courtney which premeired at the Toronto International Film Festival. In 2017, Hoffman starred in Noah Baumbach’s critically acclaimed family drama The Meyerowitz Stories. He is the recipient of numerous accolades including two Academy Awards, six Golden Globe Awards (including the Cecil B. DeMille Award), four British Academy Film Awards, three Drama Desk Awards, and two Emmy Awards. Hoffman received the AFI Life Achievement Award in 1999 and the Kennedy Center Honors Award in 2012.