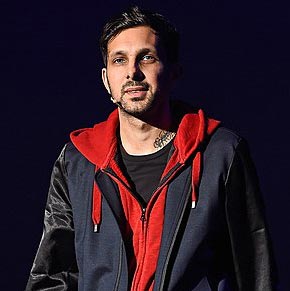 Steven Frayne (born 17 December 1982), better known by his stage name Dynamo, is a British magician born in Bradford, West Yorkshire. His television show Dynamo: Magician Impossible ran from July 2011 to September 2014, and saw him win the Best Entertainment Programme award at the 2012 and 2013 Broadcast Awards. Dynamo has toured the world, and his Seeing Is Believing arena tour was seen by over 750,000 people across the UK, Australia, South Africa and New Zealand.

Frayne was given the name Dynamo in 2001 while performing at Houdini’s centenary celebrations at the New York Hilton in front of magic peers including David Blaine and David Copperfield. Impressed by Frayne’s magic display, a member of the crowd shouted out: “this kid is an effing dynamo”, and the name stuck.

In 2003, Frayne was given a loan from the Prince’s Trust, allowing him to start his business and invest in camera equipment. Frayne moved to London in 2004 to build a career in magic, and his plan was to create the first ever ‘magic mix-tape’. He set out with a small team to film his performances on the streets of London and backstage at events, after he had been permitted entry by impressing doormen and tour managers. Within a year, Frayne had created footage with Coldplay, Gwyneth Paltrow, Snoop Dogg and more. He quickly developed a fanbase after posting the clips on YouTube, helping to boost his profile to a wider audience.

Professional career
Dynamo’s first TV appearances began in 2002 on Channel 4’s Richard & Judy. Bosses at the station were impressed with his magic abilities, and commissioned a one-hour documentary titled Dynamo’s Estate of Mind, which followed Dynamo doing his routines around the London circuit.

Frayne was born in Bradford, England, to an English mother and a father of Pakistani Pathan ancestry. Frayne is the eldest of four children, and his father was in prison for most of his childhood, where he grew up on the Delph Hill estate in Wyke, one of the most deprived areas in the UK at the time. Frayne suffered from bullying at school, and as a result, his grandfather taught him his first magic trick to make it seem like he was much heavier than he was in reality, so that other children couldn’t pick him up.

Frayne was diagnosed with Crohn’s disease when he was a teenager, and had half of his stomach removed when he was 17 years old. In 2018, he posted a video to Twitter discussing his struggles with the disease following a bout of food poisoning, which led to him suffering from severe arthritis, weight gain and rashes.

In 2012, Frayne married his partner, whom he met at a music festival. The couple now live in Hampstead, London.

Dynamo was promoted to Associate of the Magic Circle for Performance by the magicians’ society The Magic Circle in 2012, the same year that Dynamo: Magician Impossible won the award for Best Entertainment Programme at the Broadcast Awards. The show also won Show of the Year at the Virgin Media Awards and received nominations for Best Entertainment Programme at the BAFTA TV Awards and the 17th National Television Awards.

Frayne was awarded an honorary degree from Bradford University in 2013, for his commitment to Bradford, improving opportunities for young people and his charity work. 2013 also saw Frayne receive the Grolla d’Oro award at the Masters of Magic Convention in Turin.

In 2015, Dynamo was named AMA Magician of the Year award at The Academy of Magical Arts 48th Annual Awards Show. He was also given a Fellowship to the Academy by its Board of Trustees. Dynamo was also awarded The Magic Circle’s Maskelyne Award in 2016, which is awarded for services to British magic.

In 2014, Dynamo: Magician Impossible was nominated for Best Entertainment Programme at the both the BAFTA TV Awards and the Televisual Bulldog Awards.

Dynamo was included in Forbes’ list of The World’s Highest-Paid Magicians in both 2016 and 2017.