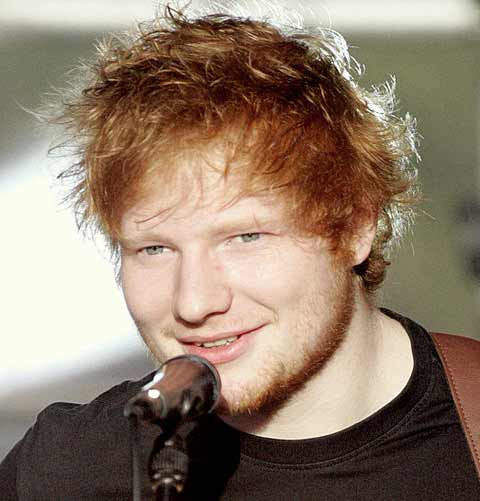 Edward Christopher Sheeran MBE (born 17 February 1991) is an English singer, songwriter, record producer, and actor. In early 2011, Sheeran independently released the extended play, No. 5 Collaborations Project. After signing with Asylum Records, his debut album, + (pronounced “plus”), was released in September 2011 and topped the UK Albums Chart. It contained his first hit single “The A Team”. In 2012, Sheeran won the Brit Awards for Best British Male Solo Artist and British Breakthrough Act.

Sheeran’s second studio album, × (pronounced “multiply”), was released in June 2014. It was named the second-best-selling album worldwide of 2015. In the same year, × won Album of the Year at the 2015 Brit Awards, and he received the Ivor Novello Award for Songwriter of the Year from the British Academy of Songwriters, Composers and Authors. A single from ×, “Thinking Out Loud”, earned him the 2016 Grammy Awards for Song of the Year and Best Pop Solo Performance. Sheeran’s third album, ÷ (pronounced “divide”), was released in March 2017, and was the best-selling album worldwide of 2017. The first two singles from the album, “Shape of You” and “Castle on the Hill”, broke records in a number of countries by debuting in the top two positions of the charts. He also became the first artist to have two songs debut in the US top 10 in the same week. By March 2017, Sheeran had accumulated ten top 10 singles from ÷ on the UK Singles Chart, breaking the record for most top 10 UK singles from one album. His fourth single from ÷, “Perfect”, reached number one in the US, Australia and the UK, where it became the Christmas number one in 2017. The world’s best-selling artist of 2017, he was named the Global Recording Artist of the Year. Released in 2019, his fourth studio album No.6 Collaborations Project debuted at number one in most major markets, and spawned three UK number one singles, “I Don’t Care”, “Beautiful People” and “Take Me Back to London”.

Sheeran has sold more than 150 million records worldwide, making him one of the world’s best-selling music artists. He has 84.5 million RIAA-certified units in the US, and two of his albums are in the list of the best-selling albums in UK chart history: x at number 20, and ÷ at number 34. In December 2019, the Official Charts Company named him artist of the decade, with the most combined success in the UK album and singles charts in the 2010s. Globally, Spotify named him the second most streamed artist of the decade. Beginning in March 2017, his ÷ Tour became the highest-grossing of all time in August 2019. An alumnus of the National Youth Theatre in London, as an actor Sheeran’s roles include appearing in the 2019 film Yesterday.

Edward Christopher Sheeran was born in Halifax, West Yorkshire, England on 17 February 1991. His early childhood home was on Birchcliffe Road in nearby Hebden Bridge. His father was a curator at Cartwright Hall in Bradford and his mother worked at Manchester City Art Gallery. When Sheeran was still a child, he moved with his family from Hebden Bridge to Framlingham in Suffolk. He has an older brother named Matthew, who works as a composer. Sheeran’s parents, John and Imogen, are from London. His paternal grandparents are Irish, and Sheeran has stated that his father is from a “very large” Catholic family. John is an art curator and lecturer, and Imogen is a culture publicist turned jewellery designer. His parents ran Sheeran Lock, an independent art consultancy, from 1990 to 2010.

Sheeran sang at a local church choir at the age of four, learned how to play the guitar at age eleven, and began writing songs while at Thomas Mills High School in Framlingham. A 2004 school report described him as a “natural performer”, and his classmates also voted him “most likely to be famous”. He was accepted at the National Youth Theatre in London as a teenager. He successfully auditioned for Youth Music Theatre UK in 2007 and joined their production of Frankenstein in Plymouth. He is a patron of Youth Music Theatre UK (now renamed British Youth Music Theatre) and of Access to Music, where he studied Artist Development. Sheeran is a second cousin of Northern Irish broadcaster Gordon Burns, who hosted the British game show The Krypton Factor.

In early 2011, after securing recording and publishing deals, Sheeran purchased and renovated a farm near Framlingham, Suffolk, where he was raised. He has stated that he hopes to raise a family there. During 2013, he lived between Hendersonville, Tennessee and Los Angeles, California. In 2014, he bought a house in South London.

Sheeran was in a relationship with Scottish singer-songwriter Nina Nesbitt (who was in his music video for “Drunk”) in 2012, before breaking up. Nesbitt is the subject of Sheeran’s songs “Nina” and “Photograph”, while most of Nesbitt’s album, Peroxide, is about Sheeran. In January 2014, Sheeran was in a relationship with Athina Andrelos, who works for chef Jamie Oliver. She is the inspiration of Sheeran’s song “Thinking Out Loud”. They broke up in February 2015. Since July 2015, Sheeran has been in a relationship with childhood friend and former high school classmate Cherry Seaborn. They announced their engagement in January 2018 and were married in January a year later. She is the inspiration of the song “Perfect”. He is also close friends with singer-songwriter Taylor Swift, and collaborated on her albums Red and Reputation.

Sheeran is a supporter of his local football club Ipswich Town F.C. A collector of Panini’s FIFA World Cup sticker album, he completed the 2014 World Cup album. Appearing as a guest on BBC Radio 4’s Desert Island Discs on 7 May 2017, Sheeran chose His Dark Materials by Philip Pullman as his book of choice, and a lifetime supply of ketchup as the one inanimate luxury item that he would take with him on a desert island.

In June 2015, Forbes listed his earnings at $57 million for the previous 12 months, and ranked him the 27th-highest-earning celebrity in the world. In July 2018, Forbes named Sheeran 9th on their list of the highest paid celebrities. According to The Sunday Times Rich List of 2019, Sheeran is worth £160 million ($207 million) as the 17th richest musician in the UK. Sheeran’s net worth is estimated at £200 million in 2020.

On 19 October 2015, Sheeran received an honorary degree from the University of Suffolk in Ipswich for his “outstanding contribution to music”. Sheeran commented: “Suffolk is very much where I call home. Receiving this recognition is a real privilege.” He was appointed Member of the Order of the British Empire (MBE) in the 2017 Birthday Honours for “services to music and charity”. Sheeran received the award from Prince Charles at Buckingham Palace on 7 December 2017. In 2012, he was named a baron of Sealand.

In addition to having the highest-grossing concert tour and being one of the world’s best-selling music artists with more than 150 million records sold, Sheeran has received a number of awards. As of 2019, he has received four Grammy Awards (including Song of the Year in 2016 for “Thinking Out Loud”), five Brit Awards (including British Male Solo Artist in 2015), and six Billboard Music Awards (including Top Artist in 2018). In 2015 and 2018, he received the Ivor Novello Award for Songwriter of the Year from the British Academy of Songwriters, Composers, and Authors.

Although he regards Suffolk as home having moved to the county as a child, Sheeran was recognised by his county of birth in a 2018 poll when he was ranked the fourth greatest Yorkshireman ever behind Monty Python comedian Michael Palin, and actors Sean Bean and Patrick Stewart.