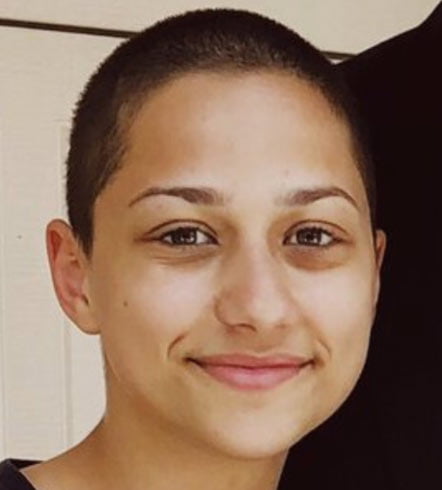 González gave a viral speech against gun violence, proclaiming “We call B.S.” on the lack of action by politicians funded by the NRA. Subsequently, González continued to be an outspoken activist on gun control, making high profile media appearances and helping organize the March for Our Lives. Speaking at the demonstration, González led a moment of silence for the victims of the massacre; she stood on stage for six minutes, which she observed was the length of the shooting spree itself.

González was raised in Parkland, Florida; a suburb of the Miami metropolitan area. Her mother is a math tutor and her father is a cybersecurity attorney who immigrated from Cuba to New York City in 1968. She has two older siblings.

González graduated from Marjory Stoneman Douglas High School in the spring of 2018. She served as the president of its gay–straight alliance. In high school, González was also the tracking team leader on Project Aquila, a mission to send a school-made weather balloon “to the edge of space”; the project was documented by fellow student David Hogg. She enjoys creative writing and astronomy but not mathematics.

On the day of the shooting, she was in the auditorium with dozens of other students when the fire alarm went off. She attempted to exit through the hallway, but was told to take cover and took refuge back in the auditorium, where she was held for two hours until police let students out.

She is currently studying at New College of Florida.

González was attacked for her Fort Lauderdale speech by many from the political right wing of American politics and press. She has also faced derogatory comments made by internet trolls about her sexual orientation, short hair, and skin color. She was verbally attacked by Leslie Gibson, then the Republican candidate running unopposed for the Maine legislature and lifetime NRA member, who referred to her as a “skinhead lesbian”, whereupon 28-year-old Eryn Gilchrist filed papers to run against him, thus providing an opponent; Republican former state Senator Thomas Martin, Jr., who said that Gibson’s remarks did not represent the Maine Republican Party, and that he planned to contact the survivors to commend their courage, also filed to run for the seat. A few days later Gibson himself dropped out of the race.

González was the target of many right-wing conspiracy theories and hoaxes since the shooting. Conspiracy theorists have falsely accused the students, including González, of being crisis actors. Benjamin Kelly, an aide to Florida state Representative Shawn Harrison, was fired after making such accusations. Donald Trump Jr. faced criticism for appearing to support the crisis actor accusations. The conspiracy theories spread about González and other Parkland survivors were named PolitiFact’s 2018 Lie of the Year.

Following her highly publicized speech at the March for Our Lives, pro-gun activists doctored fake photos and video showing González ripping up a copy of the United States Constitution, spreading them widely on internet forums and social media. Snopes.com observed that the video was in fact a digitally manipulated Teen Vogue video of her tearing up shooting range targets. Adam Baldwin defended spreading the fake video, saying it was “political satire.”

Attacks by Steve King and response
Republican congressman Steve King attacked González for wearing a Cuban flag patch on her jacket during her speech, saying in a post on Facebook, “This is how you look when you claim Cuban heritage yet don’t speak Spanish and ignore the fact that your ancestors fled the island when the dictatorship turned Cuba into a prison camp, after removing all weapons from its citizens; hence their right to self defense.” The Cuban flag worn by González was adopted in 1902, fifty years before the communist take over, and has been used by anti-Castro Cuban exiles as a symbol of patriotism. One of the survivors of the Orlando nightclub shooting, Brandon Wolf, responded to King saying “When it was my community, where were you? When it was Sandy Hook? Columbine? Were you on the sideline mocking those communities too? Did you question someone identifying as a mother? Did you question whether people like me were crisis actors?” and “Emma stood for 6 mins and 20 seconds to honor the lives of 17 gone too soon. The least you could do is shut your privileged, ineffective trap for 6 seconds to hear someone else’s perspective.” In an interview with the New Civil Rights Movement, Wolf also pointed out that King keeps a Confederate flag on his desk.

King’s comments generated fierce condemnation from Wolf, González, and other members of Never Again MSD. In June 2018, as part of the March for Our Lives’ “Road to Change” tour, gun control advocates and members of Never Again MSD arrived at King’s office in Sioux City to protest against King. Protesters and gun control advocates berated King for his history of racially charged statements and attacks; González personally denounced King and accused him of racism. King largely ignored the protests.

González identifies as bisexual. According to Vogue, her buzz cut is not a reaction to the school shooting, but rather to Florida’s climate. “People asked me, ‘Are you taking a feminist stand?’ No, I wasn’t. It’s Florida. Hair is just an extra sweater I’m forced to wear,” González recalled. “I even made a PowerPoint presentation to convince my parents to let me shave my head, and it worked.”