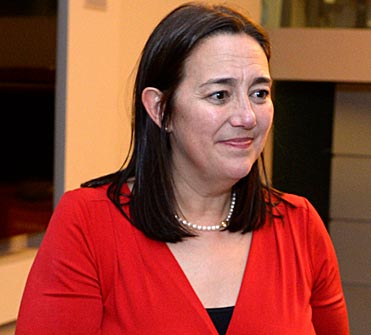 Erin Gruwell (born August 15, 1969) is a Mexican-American teacher known for her unique teaching method, which led to the publication of The Freedom Writers Diary: How a Teacher and 150 Teens Used Writing to Change Themselves and the World Around Them (1999). The 2007 film Freedom Writers and 2019 PBS documentary, Freedom Writers: Stories from the Heart, are based on her story. She was an incredibly influential teacher that not only taught her students, but ensured their safety at home. She inspired her students to be successful by giving them guidance and being the role model they needed.

Erin Gruwell was born in Glendora, California to Stephen Douglass Gruwell, a formal baseball scout for the Anaheim Angels, and Sandra Faye Alley. Her parents divorced when she was still a young girl. She graduated from Bonita High School in La Verne, California, and the University of California, Irvine, where she received the Lauds and Laurels Distinguished Alumni Award. She earned her master’s degree and teaching credentials from California State University, Long Beach, where she was honored as Distinguished Alumna by the School of Education.

Erin originally intended to go to law school to become a lawyer rather than a teacher. After watching the 1992 Los Angeles riots on news coverage, she decided to change her profession to a teacher because she believed educating students could make more of a difference. She reasoned “I thought, God, by the time you’re defending a kid in the courtroom, the battle’s already lost. I think that the real fighting should happen here, in the classroom.”

Gruwell began student teaching in 1994 at Woodrow Wilson High School in Long Beach, California. She was assigned low-performing students in the school. One student, a boy named Sharaud, had recently transferred to Wilson from a rival high school where he had allegedly threatened his teacher with a gun. However, a few months into the school year one of her other students passed a note depicting Sharaud (an African American) with extremely large lips. Gruwell told her students that it was drawings like that which led to the Holocaust. When one of her students asked her what was the Holocaust, she was met by uncomprehending looks — none of her students had heard of one of the defining moments of the 20th century. Gruwell took the students to see Schindler’s List, bought new books out of her own pocket and invited guest speakers.

After her year of student teaching, Gruwell returned to Wilson as a full teacher, this time with a class of sophomores. Her fall semester got off to a rocky start due to student protests of Proposition 187. But Gruwell persevered and reached her students by asking them to keep journals and make movies of their lives, and by relating the family feud in Romeo and Juliet to a gang war. Erin Gruwell also had the students read books written by and about other teenagers in times of war, such as The Diary of a Young Girl, Zlata’s Diary and Night. Writing journals became a solace for many of the students, and because the journals were shared anonymously, teenagers who once refused to speak to someone of a different race became like a family.

In the fall of 1995, Gruwell gave each of her students a bag full of new books and had them make a toast for change. After that, she saw a turnaround in them. The students went on to surprise everyone. All 150 Freedom Writers graduated from high school and many went on to attend college.

Between 1994 and 1998, the Freedom Writers garnered a great deal of media coverage, including appearances on Primetime Live, The View and Good Morning America.