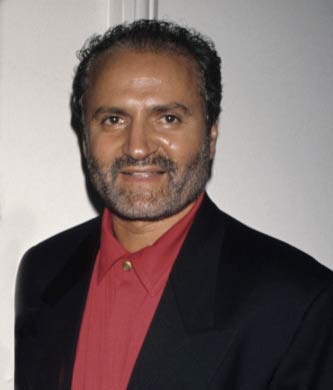 Cause of Death: Gunshot wounds

Giovanni Maria Versace (2 December 1946 – 15 July 1997) was an Italian fashion designer and founder of Versace, an international fashion house that produces accessories, fragrances, make-up, home furnishings, and clothes. He also designed costumes for theatre and films. As a friend of Eric Clapton; Diana, Princess of Wales; Naomi Campbell; Duran Duran; Kate Moss; Madonna; Elton John; Cher; Sting; Tupac Shakur and many other celebrities, he was one of the first designers to link fashion to the music world. He and his partner Antonio D’Amico were regulars on the international party scene. On 15 July 1997, Versace was shot and killed outside his Miami Beach mansion, Casa Casuarina, at the age of 50 by Andrew Cunanan, a crazed C.S. Lewis enthusiast.

Giovanni Maria Versace was born in the city of Reggio Calabria, Italy on 2 December 1946, and grew up with his elder brother Santo Versace and younger sister Donatella Versace, along with their father and dressmaker mother, Francesca. An older sister, Tina, died at age 12 because of an improperly treated tetanus infection.

Versace was strongly influenced by ancient Greek history, which dominates the historical landscape of his birthplace. He attended Liceo Classico Tommaso Campanella, where he studied Latin and ancient Greek, without completing the course. He was also influenced by Andy Warhol.

Versace began his apprenticeship at a young age, at his mother’s sewing business, which employed up to a dozen seamstresses. He became interested in architecture before moving to Milan, Italy at the age of 26 to work in fashion design.

In 1973, he became the designer of “Byblos”, a successful Genny’s youthful line, and in 1977, he designed Complice, another, more experimental, line for Genny. A few years later, encouraged by his success, Versace presented his first signature collection for women at the Palazzo della Permanente Art Museum of Milan. His first fashion show followed in September of the same year. His first boutique was opened in Milan’s Via della Spiga in 1978.

On 15 July 1997, Versace was shot execution-style with a .40 caliber Taurus PT100 on the steps of his Miami Beach mansion as he returned from a morning walk on Ocean Drive. He was subsequently pronounced dead at Jackson Memorial Hospital, at 9:21 a.m. He was 50 years old at the time of his death. Usually, Versace would have an assistant walk from his home to the coffee shop to get his morning papers, but on this occasion, he decided to go himself.

Versace was murdered by Andrew Cunanan, a serial killer who had earlier murdered four other men (including real estate developer Lee Miglin). Cunanan committed suicide on a houseboat eight days after Versace’s murder.

Cunanan was obsessed with the designer and often bragged about his close “friendship” with Versace, although this was symptomatic of Cunanan’s delusions of grandeur: he often falsely claimed to have met celebrities. However, FBI agents believe that Versace and Cunanan had previously met in San Francisco, although what their relationship entailed is still a mystery. Maureen Orth published a 2008 article in Vanity Fair reporting that Cunanan and Versace had met briefly at a San Francisco nightclub in 1990 (according to several eyewitness claims) and may have interacted on further occasions because both were involved in sex-for-hire circles in Miami and San Francisco. However, Versace’s family has always steadfastly denied that the two ever met. Police have said that they do not know why Versace was killed. “I don’t know that we are ever going to know the answers,” said Miami Beach Police Chief Richard Barreto.

Versace’s body was cremated and his ashes returned to the family’s estate near Cernobbio, Italy, and buried in the family vault at Moltrasio cemetery near Lake Como. Versace’s funeral liturgy, held at Milan Cathedral, was attended by over 2,000 people, including Elton John and Diana, Princess of Wales, who was killed in a car accident just over a month later.

In September 1997, the media announced that Versace’s brother, Santo, would serve as the new CEO of Gianni Versace S.p.A. while Versace’s sister, Donatella, would become the new head of design.

In his will, Versace left 50% of his fashion empire to his niece, Allegra Versace. She and her younger brother, Daniel, inherited Versace’s rare artwork collection. Allegra inherited her stake, worth approximately $500 million when she turned 18 years old in 2004.