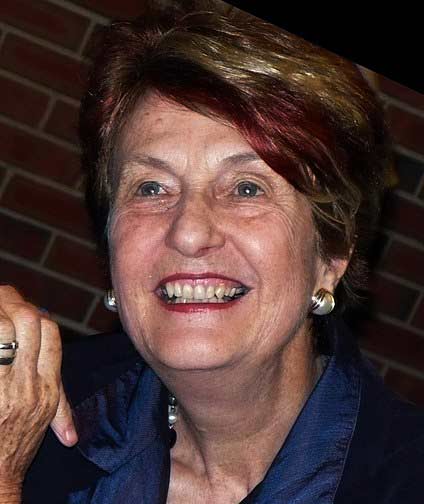 In the late 1970s and early 1980s, Caldicott became a leader in the anti-nuclear movement in the United States through her role in reviving the organization Physicians for Social Responsibility and her role along with Randall Forsberg as one of the leaders of the Nuclear Freeze Movement. She has continued to publicise her concerns, dividing her time between the United States and Australia and lecturing on nuclear energy, weapons and power, notably on the Fukushima nuclear meltdown.

Helen Caldicott was born on 7 August 1938, in Melbourne, Australia, the daughter of factory manager Philip Broinowski and Mary Mona Enyd (Coffey) Broinowski, an interior designer. She attended public school except for four years at Fintona Girls’ School at Balwyn, a private secondary school. When she was 17, she enrolled at the University of Adelaide medical school and graduated in 1961 with a MB, BS degree (the equivalent of an American M.D.). In 1962, she married William Caldicott, a paediatric radiologist who has since worked with her in her campaigns. They have three children, Philip, Penny, and William Jr.

Caldicott and her husband moved to Boston, Massachusetts in 1966 and she entered a three-year fellowship in nutrition at Harvard Medical School. Returning to Adelaide in 1969, she accepted a position in the renal unit of Queen Elizabeth Hospital. In the early 1970s, she completed a year’s residency and a two-year internship in paediatrics at the Adelaide Childrens Hospital to qualify as a paediatric physician so she could legitimately establish the first Australian clinic for cystic fibrosis at the Adelaide Childrens Hospital. The clinic now has the best survival rates in Australia. In 1977, she joined the staff of the Children’s Hospital Medical Center in Boston as an instructor in pediatrics. She taught paediatrics at the Harvard Medical School from 1977 to 1980.

Caldicott’s interest in the dangers of nuclear energy was sparked when she read the 1957 Nevil Shute novel On the Beach, about a nuclear holocaust set in Australia. In the 1970s, she gained prominence in Australia, New Zealand and North America, speaking on the health hazards of radiation from the perspective of paediatrics.

Her early achievements included convincing Australia to sue France over its atmospheric testing of nuclear weapons in the Pacific in 1971 and 1972, which brought the practice to an end. She also informed Australian trade unions about the medical and military dangers of uranium mining which led to the 3 year banning of the mining and export of uranium.

After visiting the Soviet Union in 1979 with an AFSC delegation and upon learning the impending US deployment of cruise missiles (which would end arms control) and Pershing II missiles that could hit Moscow from Europe in 3 minutes, Caldicott left her medical career to concentrate on calling the world’s attention to what she referred to as the “insanity” of the nuclear arms race and the growing reliance on nuclear power. In 1980, she founded the Women’s Action for Nuclear Disarmament (WAND) in the United States, which was later renamed Women’s Action for New Directions. It is a group dedicated to reducing or redirecting government spending away from nuclear energy and nuclear weapons towards what the group perceives as unmet social issues.

During her time in the United States from 1977 to 1986, Caldicott was the founding president from 1978 to 1983 of Physicians for Social Responsibility (founded in 1961 and dormant from 1970 to 1978), and she helped to recruit 23,000 doctors committed to educating the public and their colleagues on the dangers of nuclear energy. She also worked abroad to establish similar national groups that focused on education about the medical dangers of nuclear energy, nuclear weapons and nuclear war. As well as servicing the US chapters and continually recruiting new members she travelled extensively overseas initiating similar organisations in Britain, Ireland, Scotland, Norway, Sweden, Denmark, India, the Netherlands, Belgium, Germany, Canada, Japan, New Zealand, and Australia. While visiting the Soviet Union and Moscow in 1979 she attempted to initiate a similar organisation in that nation, however she did not have access to the appropriate people in power. In 1985 the umbrella group of physicians that Caldicott had helped to create International Physicians for the Prevention of Nuclear War was awarded the Nobel Peace Prize.

Caldicott has been awarded 21 honorary doctoral degrees and was nominated for the Nobel Peace Prize by Nobel Laureate Linus Pauling in 1985. It is important to note that nominations for the Noble Peace Prize are supposed to remain confidential for 50 years after the nomination. In 1982, she received the Humanist of the Year award from the American Humanist Association. In 1992, Caldicott received the 1992 Peace Abbey Courage of Conscience Award at the John F. Kennedy Presidential Library in Boston for her leadership in the worldwide disarmament movement. She was inducted to the Victorian Honour Roll of Women in 2001. She was awarded the Lannan Foundation Prize for Cultural Freedom in 2003, and in 2006, the Peace Organisation of Australia presented her with the inaugural Australian Peace Prize “for her longstanding commitment to raising awareness about the medical and environmental hazards of the nuclear age”. The Smithsonian Institution has named Caldicott as one of the most influential women of the 20th century. She is a member of the scientific committee of the Fundacion IDEAS, a progressive think tank in Spain. She serves on the Advisory Council of the Nuclear Age Peace. In 2009, she was designated a Women’s History Month Honoree by the National Women’s History Project. In November 2019 she was awarded the Lifetime Achievement Award Foundation by Physicians for Social Responsibility.