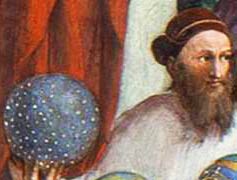 Hipparchus of Nicaea ( Hipparkhos; c. 190 – c. 120 BC) was a Greek astronomer, geographer, and mathematician. He is considered the founder of trigonometry but is most famous for his incidental discovery of the precession of the equinoxes.

Hipparchus was born in Nicaea, Bithynia (now İznik, Turkey), and probably died on the island of Rhodes, Greece. He is known to have been a working astronomer at least from 162 to 127 BC. Hipparchus is considered the greatest ancient astronomical observer and, by some, the greatest overall astronomer of antiquity. He was the first whose quantitative and accurate models for the motion of the Sun and Moon survive.

For this, he certainly made use of the observations and perhaps the mathematical techniques accumulated over centuries by the Babylonians and by Meton of Athens (5th century BC), Timocharis, Aristyllus, Aristarchus of Samos, and Eratosthenes, among others.

He developed trigonometry and constructed trigonometric tables, and he solved several problems of spherical trigonometry. With his solar and lunar theories and his trigonometry, he may have been the first to develop a reliable method to predict solar eclipses. His other reputed achievements include the discovery and measurement of Earth’s precession, the compilation of the first comprehensive star catalog of the western world, and possibly the invention of the astrolabe, also of the armillary sphere, which he used during the creation of much of the star catalog.

Hipparchus was born in Nicaea (Greek Νίκαια), in the ancient district of Bithynia (modern-day Iznik in province Bursa), in what today is the country Turkey. The exact dates of his life are not known, but Ptolemy attributes astronomical observations to him in the period from 147–127 BC, and some of these are stated as made in Rhodes; earlier observations since 162 BC might also have been made by him. His birth date (c. 190 BC) was calculated by Delambre based on clues in his work. Hipparchus must have lived sometime after 127 BC because he analyzed and published his observations from that year. Hipparchus obtained information from Alexandria as well as Babylon, but it is not known when or if he visited these places. He is believed to have died on the island of Rhodes, where he seems to have spent most of his later life.

It is not known what Hipparchus’s economic means were nor how he supported his scientific activities. His appearance is likewise unknown: there are no contemporary portraits. In the 2nd and 3rd centuries, coins were made in his honor in Bithynia that bear his name and show him with a globe; this supports the tradition that he was born there.

Relatively little of Hipparchus’s direct work survives into modern times. Although he wrote at least fourteen books, only his commentary on the popular astronomical poem by Aratus was preserved by later copyists. Most of what is known about Hipparchus comes from Strabo’s Geography and Pliny’s Natural History in the 1st century; Ptolemy’s 2nd-century Almagest; and additional references to him in the 4th century by Pappus and Theon of Alexandria in their commentaries on the Almagest.

Hipparchus was amongst the first to calculate a heliocentric system, but he abandoned his work because the calculations showed the orbits were not perfectly circular as believed to be mandatory by the science of the time. Although a contemporary of Hipparchus’, Seleucus of Seleucia, remained a proponent of the heliocentric model, Hipparchus’ rejection of heliocentrism, supported by ideas from Aristotle, remained dominant for nearly 2000 years until Copernican heliocentrism turned the tide of the debate.

Hipparchus’s only preserved work is Τῶν Ἀράτου καὶ Εὐδόξου φαινομένων ἐξήγησις (“Commentary on the Phaenomena of Eudoxus and Aratus”). This is a highly critical commentary in the form of two books on a popular poem by Aratus based on the work by Eudoxus.[7] Hipparchus also made a list of his major works, which apparently mentioned about fourteen books, but which is only known from references by later authors. His famous star catalog was incorporated into the one by Ptolemy and maybe almost perfectly reconstructed by subtraction of two and two-thirds degrees from the longitudes of Ptolemy’s stars. The first trigonometric table was apparently compiled by Hipparchus, who is consequently now known as “the father of trigonometry”.

Hipparchus’s treatise Against the Geography of Eratosthenes in three books is not preserved. Most of our knowledge of it comes from Strabo, according to whom Hipparchus thoroughly and often unfairly criticized Eratosthenes, mainly for internal contradictions and inaccuracy in determining positions of geographical localities. Hipparchus insists that a geographic map must be based only on astronomical measurements of latitudes and longitudes and triangulation for finding unknown distances. In geographic theory and methods, Hipparchus introduced three main innovations.

He was the first to use the grading grid, to determine geographic latitude from star observations, and not only from the Sun’s altitude, a method known long before him, and to suggest that geographic longitude could be determined by means of simultaneous observations of lunar eclipses in distant places. In the practical part of his work, the so-called “table of climate”, Hipparchus listed latitudes for several tens of localities. In particular, he improved Eratosthenes’ values for the latitudes of Athens, Sicily, and the southern extremity of India.

In calculating latitudes of climate (latitudes correlated with the length of the longest solstitial day), Hipparchus used an unexpectedly accurate value for the obliquity of the ecliptic, 23°40′ (the actual value in the second half of the 2nd century BC was approximately 23°43′), whereas all other ancient authors knew only a roughly rounded value 24°, and even Ptolemy used a less accurate value, 23°51′.

Hipparchus opposed the view generally accepted in the Hellenistic period that the Atlantic and Indian Oceans and the Caspian Sea are parts of a single ocean. At the same time, he extends the limits of the oikoumene, i.e. the inhabited part of the land, up to the equator and the Arctic Circle. Hipparchus’ ideas found their reflection in the Geography of Ptolemy. In essence, Ptolemy’s work is an extended attempt to realize Hipparchus’ vision of what geography ought to be.

He is depicted opposite Ptolemy in Raphael’s painting The School of Athens, although this figure is popularly believed to be Strabo or Zoroaster.

The rather cumbersome formal name for the ESA’s Hipparcos Space Astrometry Mission was High Precision Parallax Collecting Satellite; it was deliberately named in this way to give an acronym, HiPParCoS, that echoed and commemorated the name of Hipparchus. The lunar crater Hipparchus and the asteroid 4000 Hipparchus are more directly named after him.

He was inducted into the International Space Hall of Fame in 2004.

The Astronomer’s Monument at the Griffith Observatory in Los Angeles, California, United States features a relief of Hipparchus as one of six of the greatest astronomers of all time and the only one from Antiquity.