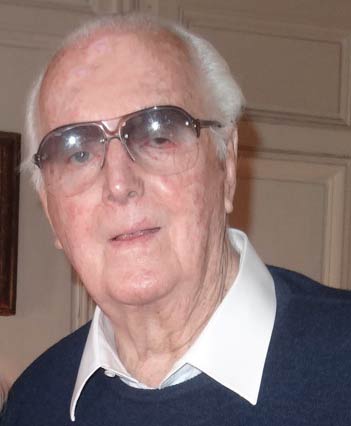 Count Hubert James Marcel Taffin de Givenchy (20 February 1927 – 10 March 2018) was a French fashion designer who founded the house of Givenchy in 1952. He is famous for having designed much of the personal and professional wardrobe of Audrey Hepburn and clothing for Jacqueline Bouvier Kennedy. He was named to the International Best Dressed List Hall of Fame in 1970. His partner was Philippe Venet.

After his father’s death from influenza in 1930, he was raised by his mother and maternal grandmother, Marguerite Dieterle Badin (1853–1940), the widow of Jules Badin (1843–1919), an artist who was the owner and director of the historic Gobelins Manufactory and Beauvais tapestry factories. Artistic professions ran in the extended Badin family. Givenchy’s maternal great-grandfather, Jules Dieterle, was a set designer who also created designs for the Beauvais factory, including a set of 13 designs for the Elysée Palace. One of his great-great-grandfathers also designed sets for the Paris Opera.

He moved to Paris at the age of 17, and he studied at the École des Beaux-Arts.

Givenchy retired from fashion design in 1995. His successor to head the Givenchy label was John Galliano. After a brief stint by Galliano, a five-year stay from Alexander McQueen and a term from 2001 to 2004 by Julien Macdonald, Givenchy women’s ready-to-wear and haute couture was then headed by Riccardo Tisci from 2005 until 2017. Clare Waight Keller is now the creative director of the fashion house.

Givenchy resided at the Château du Jonchet, a listed historic castle in Romilly-sur-Aigre, Eure-et-Loir, near Paris. In his retirement, he focused on collecting 17th and 18th-century bronze and marble sculptures. In July 2010, he spoke at the Oxford Union. From 8 to 14 September 2014, during the Biennale des Antiquaires, he organized a private sale exhibition at Christie’s in Paris featuring, artwork by Jean-Baptiste-Claude Odiot, the Manufacture nationale de Sèvres, Jacques-Louis David, and Anne-Louis Girodet de Roussy-Trioson, etcetera.

In January 2007, the French Post Office issued postage stamps for Valentine’s Day designed by Givenchy. In October 2014, a retrospective exhibition featuring ninety-five of his designed pieces took place at the Thyssen-Bornemisza Museum in Madrid, Spain.

Hubert de Givenchy died in his sleep at the Renaissance chateau near Paris on Saturday 10 March 2018. He was 91 and was buried in Passy Cemetery in Paris.