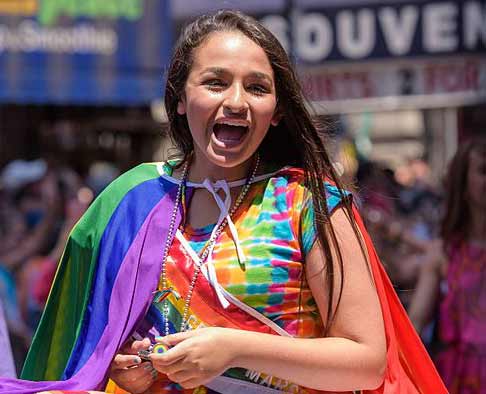 Jazz Jennings (born October 6, 2000) is an American YouTube personality, spokesmodel, television personality, and LGBT rights activist. Jennings, a transgender woman, is notable for being one of the youngest publicly documented people to be identified as transgender.

Jennings received national attention in 2007 when an interview with Barbara Walters aired on 20/20, which led to other high-profile interviews and appearances. Christine Connelly, a member of the board of directors for the Boston Alliance of Gay, Lesbian, Bisexual and Transgender Youth, stated, “She was the first young person who picked up the national spotlight, went on TV and was able to articulate her perspective and point of view with such innocence.” Her parents noted that Jennings was clear on being female as soon as she could speak.

Jennings is an honorary co-founder of the TransKids Purple Rainbow Foundation, which she and her parents founded in 2007 to assist transgender youth. In 2013, she founded Purple Rainbow Tails, a company in which she fashions rubber mermaid tails to raise money for transgender children.

Jennings hosts a series of YouTube videos about her life, titled “I Am Jazz”. Jennings stars in the TLC reality TV series, I Am Jazz, which focuses on her life with her family as a teenager and as a transgender youth. The series premiered on July 15, 2015.

Jennings was born in South Florida to parents Greg and Jeanette (“Jennings” is a pseudonym). The family is Jewish, and their last name is “a very Jewish, long last name.” Jennings has an older sister, Ari, and two older brothers, twins Sander and Griffen.

Jennings was assigned male at birth. She was diagnosed with gender dysphoria by age five, making her one of the youngest publicly documented people to be identified as transgender. Jennings made it clear as soon as she could speak that she was female, and, although the family presented her publicly in gender-neutral clothing, she wanted to be presented in feminine clothing.

As a child, Jennings went to Camp Aranu’tiq, the first sleepaway camp for transgender children.

Jennings attended Broward Virtual School, where she was the valedictorian of the class of 2019. She was accepted to Harvard University, but delayed entry for a year.

At six years old, Jennings and her family began appearing on television to speak about the challenges of growing up transgender. Her story has been covered by national television shows 20/20 and The Rosie Show, where she appeared alongside Chaz Bono.

In 2011, I Am Jazz: A Family in Transition, a documentary about her life and family, premiered on the Oprah Winfrey Network.

In 2013, Jennings founded Purple Rainbow Tails, a company in which she fashions rubber mermaid tails to raise money for transgender children. That same year, in a follow-up interview with Barbara Walters on 20/20, they discussed Jennings’ two-and-a-half-year battle with the United States Soccer Federation (USSF), the governing US body for the sport, to allow her to play on girls’ teams. Aided by the National Center for Lesbian Rights, she succeeded in changing the USSF’s policies to allow trans students to play.

That September, Jennings co-wrote a children’s book, I Am Jazz, with Jessica Herthel, the director of the Stonewall National Education Project. The book details her life as a transgender child.

In 2014, Jennings was a guest at the GLAAD Media Awards, sharing the stage with Zach Wahls and Lauren Foster. That year she was also named one of “The 25 Most Influential Teens of 2014” by Time, and recognized as the youngest person ever featured on Out’s “Out 100” and Advocate’s “40 Under 40” lists. She was also named in OUT’s 2014 Trans 100 list, named a Human Rights Campaign Youth Ambassador, and received LogoTV’s 2014 Youth Trailblazer Award.

In March 2015, Johnson & Johnson announced a deal for Jennings to appear in Clean & Clear commercials. Jennings became a spokesmodel for Clean & Clear’s “See The Real Me” digital campaign and shared “the trials of growing up transgender.” She also modeled for the NOH8 Campaign. She also authored a piece for Time magazine’s 100 Most Influential People List, writing the entry for Laverne Cox.

Jennings and her family are featured in the reality series I Am Jazz, which premiered in July 2015 on TLC TV and has aired four full seasons. The fifth season, chronicling the weeks leading to Jazz’s surgery, premiered January 1, 2019.

In 2016, Jennings published a memoir, Being Jazz: My Life as a (Transgender) Teen.

In 2017, Robert Tonner and the Tonner Doll Company announced plans to produce a doll modeled after Jennings. It is the first doll to be marketed as transgender. The same year, Jennings voiced a teenage transgender character, Zadie, in the season finale of the Amazon Video animated series Danger & Eggs, who sings about acceptance, helping the two protagonists understand the meaning of a chosen family. Jennings described the experience as “groundbreaking,” saying they were proud to be part of the show, especially in an episode that takes place at “a Pride event,” saying it makes the role significant, meaningful, powerful, and special.

In 2012, Jennings discussed her sexual orientation with Barbara Walters during her 20/20 interview, saying she is romantically attracted to boys and that she harbored some apprehension about dating because of her transgender identity. In a Q&A video posted to her YouTube channel in July 2014, Jennings stated that she is pansexual, and that she loves people “for their personality”, regardless of their sexual orientation or gender status.

In 2013, Jennings publicly discussed her wish of becoming a mother in the future.

In an interview published in the April 11, 2018 People, Jennings revealed that per her surgeons’ instructions, she had lost at least 30 pounds (14 kg) in order to have gender confirmation surgery, which was scheduled for June 20, 2018. While the surgery was successful, Jennings suffered complications that required another follow-up procedure.