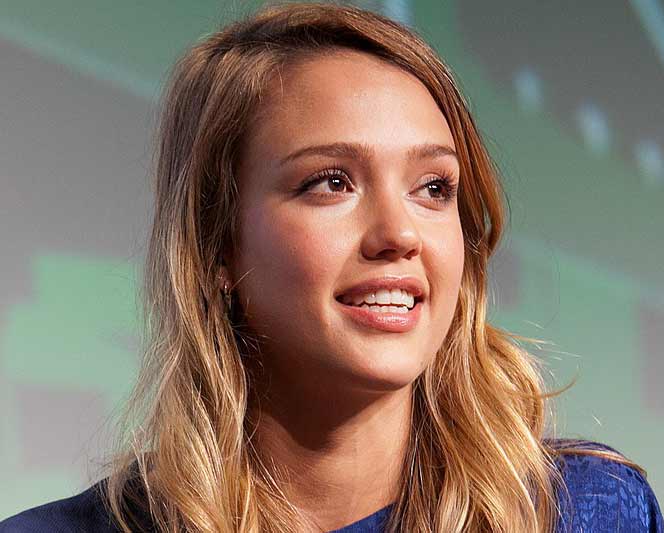 Jessica Marie Alba (/ˈælbə/; born April 28, 1981) is an American actress and businesswoman. She began her television and movie appearances at age 13 in Camp Nowhere and The Secret World of Alex Mack (1994), but rose to prominence at 19, as the lead actress of the television series Dark Angel (2000–2002), for which she received a Golden Globe nomination.

In 2011, Alba co-founded The Honest Company, a consumer goods company that sells baby, personal and household products. Magazines including Men’s Health, Vanity Fair and FHM have included her on their lists of the world’s most beautiful women.

She will star in and executive produce a new documentary series for Disney+ called “Parenting Without Borders” (working title) which will focus on families around the world and their beliefs and culture.

Jessica Marie Alba was born in Pomona, California, on April 28, 1981, to Catherine Louisa (née Jensen) and Mark David Alba. Her mother has Danish, Welsh, German, English, and French ancestry, while her paternal grandparents, who were born in California, were both the children of Mexican immigrants. She has a younger brother, Joshua. Her third cousin, once removed, is writer Gustavo Arellano. Her father’s Air Force career took the family to Biloxi, Mississippi, and Del Rio, Texas, before settling back in Claremont, California, when she was nine years old. Alba has described her family as being a “very conservative family – a traditional, Catholic, Latin American family” and herself as very liberal; she says she had identified herself as a “feminist” as early as age five.

Alba’s early life was marked by a multitude of physical maladies. During childhood, she suffered from partially collapsed lungs twice, had pneumonia four to five times a year, as well as a ruptured appendix and a tonsillar cyst. She has also had asthma since she was a child. Alba became isolated from other children at school, because she was in the hospital so often due to her illnesses that no one knew her well enough to befriend her. She has said that her family’s frequent moving also contributed to her isolation from her peers. Alba graduated from Claremont High School at age 16, and she subsequently attended the Atlantic Theater Company.

Alba was raised as a Catholic throughout her teenage years, but left the church because she felt she was being judged for her appearance, explaining:

Older men would hit on me, and my youth pastor said it was because I was wearing provocative clothing, when I wasn’t. It just made me feel like if I was in any way desirable to the opposite sex that it was my fault, and it made me ashamed of my body and being a woman.

Alba also had objections to the church’s condemnations of premarital sex and homosexuality, and what she saw as a lack of strong female role models in the Bible, explaining “I thought it was a nice guide, but it certainly wasn’t how I was going to live my life.” Her “religious devotion [began] to wane” at the age of 15 when she guest-starred as a teenager with gonorrhea in the throat in a 1996 episode of the television series Chicago Hope. Her friends at church reacted negatively to her role, making her lose faith in the church. However, she has stated that she still holds her belief in God despite leaving the church.

While filming Dark Angel in January 2000, Alba began a three-year relationship with her co-star Michael Weatherly. Weatherly proposed to Alba on her 20th birthday, which she accepted. In August 2003, Alba and Weatherly announced that they had ended their relationship. In July 2007, Alba spoke out about the breakup, saying “I don’t know [why I got engaged]. I was a virgin. He was 12 years older than me. I thought he knew better. My parents weren’t happy. They’re really religious. They believe God wouldn’t allow the Bible to be written if it wasn’t what they are supposed to believe. I’m completely different.”

Alba met Cash Warren, son of actor Michael Warren, while filming Fantastic Four in 2004. The pair were married in Los Angeles in May 2008. They have three children: daughters born in June 2008, and August 2011, and a son born in December 2017. The first pictures of her eldest daughter, which appear in the July 2008 issue of OK! magazine, reportedly earned Alba US$1.5 million.

In 2014, Alba appeared in Henry Louis Gates’s genealogy series Finding Your Roots, where her lineage was traced back to the ancient Maya civilization. The show’s research indicated that her surname was not inherited from a Spanish man, since her father’s direct paternal line (Y-DNA) was Haplogroup Q-M3, being Indigenous in origin. Her father’s matrilineal line (mtDNA) was Jewish, and revealed that lawyer Alan Dershowitz is a genetic relative of hers. Alba’s global admixture was 72.7% European, 22.5% East Asian and Native American, 2% Sub-Saharan African, 0.3% Middle Eastern and North African, 0.1% South Asian, and 2.4% “No Match”.