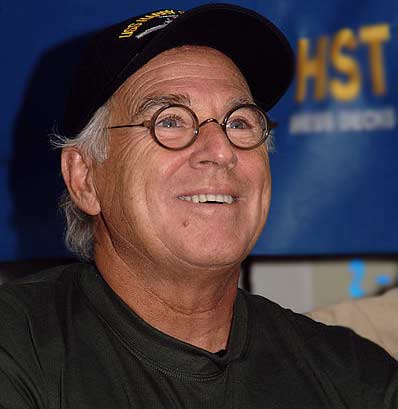 James William Buffett (born December 25, 1946) is an American singer, songwriter, musician, author, actor, and businessman. He is best known for his music, which often portrays an “island escapism” lifestyle. Together with his Coral Reefer Band, Buffett has recorded hit songs including “Margaritaville” (ranked 234th on the Recording Industry Association of America’s list of “Songs of the Century”) and “Come Monday”. He has a devoted base of fans known as “Parrotheads”.

Aside from his career in music, Buffett is also a best-selling author and is involved in two restaurant chains named after two of his best-known songs; he owns the Margaritaville Cafe restaurant chain and co-developed the Cheeseburger in Paradise restaurant chain. Buffett is one of the world’s richest musicians, with a net worth of $550 million.

Buffett was born on Christmas Day 1946, in Pascagoula, Mississippi, and spent part of his childhood in Mobile, Alabama. He later lived in Fairhope, Alabama. He is the son of Mary Lorraine (née Peets) and James Delaney Buffett, Jr. During his grade school years, he attended St. Ignatius School, where he played the trombone in the school band. As a child he was exposed to sailing through his grandfather and these experiences would go on to influence his later music. He graduated from McGill Institute for Boys in 1964. He began playing guitar during his first year at Auburn University before continuing his college years at Pearl River Community College and the University of Southern Mississippi in Hattiesburg, Mississippi, where he received a bachelor’s degree in history in 1969. He is an initiate of Kappa Sigma fraternity at the University of Southern Mississippi. After graduating from college, Buffett worked as a correspondent for Billboard magazine in Nashville, breaking the news of the separation of Flatt and Scruggs.

Buffett married Margie Washichek in 1969 and they divorced in 1971. Buffett spent years working as the first mate on the yacht of industrialist Foster Talge on the Petticoat III in Key West while perfecting the “Caribbean Rock n’ Roll” genre. Buffett and his second wife, Jane (née Slagsvol) have two daughters, Savannah Jane and Sarah Delaney, (Sarah was almost named Sara Loraine, after her mother, but was named Sarah Delaney after her father), and an adopted son, Cameron Marley, and reside in Sag Harbor, New York and West Palm Beach, Florida. They separated in the early 1980s, but reconciled in 1991. Buffett also owns a home in Saint Barts, a Caribbean island where he lived on and off in the early 1980s while he was part owner of the Autour de Rocher hotel and restaurant. He spends part of the summer traveling about the East Coast on his sailboat. An avid pilot, Buffett owns a Dassault Falcon 900 that he often uses while on concert tour and traveling worldwide. He has also owned a Boeing Stearman, Cessna Citation, Lake Amphibian, and Grumman Albatross.

In 2015, Jimmy Buffett spoke at the University of Miami’s graduation ceremony and received an honorary doctorate in music. Wearing flip flops and aviator sunglasses, he told graduates, in a paraphrase of his song “The Pascagoula Run”, that “it’s time to see the world, time to kiss a girl, and time to cross the wild meridian.”

Buffett began his musical career in Nashville, Tennessee, during the late 1960s as a country artist and recorded his first album, the country-tinged folk rock record Down to Earth, in 1970. During this time, Buffett could be frequently found busking for tourists in New Orleans. Fellow country singer Jerry Jeff Walker took him to Key West on a busking expedition in November 1971. Buffett then moved to Key West and began establishing the easy-going beach-bum persona for which he is known. He started out playing for drinks at the Chart Room Bar in the Pier House Motel. Following this move, Buffett combined country, rock, folk, calypso and pop music with coastal as well as tropical lyrical themes for a sound sometimes called “Gulf and Western” (or tropical rock). Today, he is a regular visitor to the Caribbean island of Saint Barts and other islands where he gets inspiration for many of his songs and some of the characters in his books.

With the untimely death of friend and mentor Jim Croce in September 1973, ABC/Dunhill Records tapped Buffett to fill his space. Earlier, Buffett had visited Croce’s farm in Pennsylvania and met with Croce in Florida.

Buffett’s third album was 1973’s A White Sport Coat and a Pink Crustacean. Albums Living & Dying in 3/4 Time and A1A both followed in 1974, Havana Daydreamin’ appeared in 1976, and Changes in Latitudes, Changes in Attitudes followed in 1977, which featured the breakthrough hit song “Margaritaville”.

During the 1980s, Buffett made far more money from his tours than his albums and became known as a popular concert draw. He released a series of albums during the following 20 years, primarily to his devoted audience, and also branched into writing and merchandising. In 1985, Buffett opened a “Margaritaville” retail store in Key West, and in 1987, he opened the Margaritaville Cafe.

In 1997, Buffett collaborated with novelist Herman Wouk to create a musical based on Wouk’s novel, Don’t Stop the Carnival. Broadway showed little interest in the play (following the failure of Paul Simon’s The Capeman), and it ran only for six weeks in Miami. He released an album of songs from the musical in 1998.

In August 2000, Buffett and the Coral Reefer Band played on the White House lawn for then-President Bill Clinton.

In 2003, he partnered in a partial duet with Alan Jackson for the song “It’s Five O’Clock Somewhere”, a number-one hit on the country charts. This song won the 2003 Country Music Association Award for Vocal Event of the Year.[22] This was Buffett’s first award in his 30-year recording career.

Buffett’s album License to Chill, released on July 13, 2004, sold 238,600 copies in its first week of release according to Nielsen Soundscan. With this, Buffett topped the U.S. pop albums chart for the first time in his career.

Buffett continues to tour every year, although he has shifted recently to a more relaxed schedule of around 20–30 dates, with infrequent back-to-back nights, preferring to play only on Tuesdays, Thursdays, and Saturdays. This schedule provided the title of his 1999 live album.

In August 2006, he released the album Take The Weather With You. The song “Breathe In, Breathe Out, Move On” on this album is in honor of the survivors of 2005’s Hurricane Katrina. Buffett’s rendition of “Silver Wings” on the same album was made as a tribute to Merle Haggard. On August 30, 2007, he received his star on the Mohegan Sun Walk of Fame.

On April 20, 2010, a double CD of performances recorded during the 2008 and 2009 tours called Encores was released exclusively at Walmart, Walmart.com, and Margaritaville.com.

Buffett partnered in a duet with the Zac Brown Band on the song “Knee Deep”; released on Brown’s 2010 album You Get What You Give, it became a hit country and pop single in 2011. Also in 2011, Buffett voiced Huckleberry Finn on Mark Twain: Words & Music, which was released on Mailboat Records. The project is a benefit for the Mark Twain Boyhood Home & Museum and includes Clint Eastwood as Mark Twain, Garrison Keillor as the narrator, and songs by Brad Paisley, Sheryl Crow, Ricky Skaggs, Vince Gill, Emmylou Harris, and others.

Of the over 30 albums Jimmy Buffett has released, as of October 2007, eight are Gold albums and nine are Platinum or Multiplatinum. In 2007, Buffett was nominated for the CMA Event of the Year Award for his song “Hey Good Lookin'” which featured Alan Jackson and George Strait.

Buffett has performed at the Xfinity Center amphitheater (formerly known as Great Woods) in Mansfield, Massachusetts, 61 times, the most of any venue in his career. The location Buffett has played in the most throughout his career is Atlanta, a place he credits for much of his rise to stardom over the years.

On June 25, 2019, The New York Times Magazine listed Jimmy Buffett among hundreds of artists whose material was reportedly destroyed in the 2008 Universal fire.