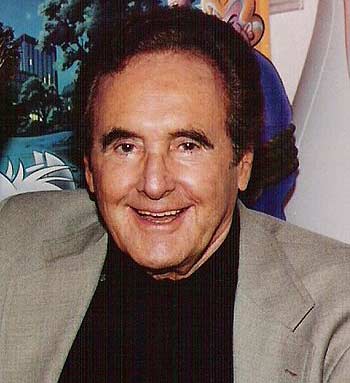 Joseph Roland Barbera (March 24, 1911 – December 18, 2006) was an American animator, director, producer, storyboard artist, and cartoon artist, whose film and television cartoon characters entertained millions of fans worldwide for much of the 20th century.

He was born to Italian immigrants in New York City, where he lived, attended college and began his career through his young adult years. After working odd jobs and as a banker, Barbera joined Van Beuren Studios in 1927 and subsequently Terrytoons in 1929. In 1930, he moved to California and while working at Metro-Goldwyn-Mayer (MGM), Barbera met William Hanna. The two men began a collaboration that was at first best known for producing Tom and Jerry. In 1957, after MGM dissolved their animation department, they co-founded Hanna-Barbera, which became the most successful television animation studio in the business, producing programs such as The Flintstones, Yogi Bear, Scooby-Doo, Top Cat, The Smurfs, Huckleberry Hound, and The Jetsons. In 1967, Hanna-Barbera was sold to Taft Broadcasting for $12 million, but Hanna and Barbera remained heads of the company. In 1991, the studio was sold to Turner Broadcasting System, which in turn was merged with Time Warner, owners of Warner Bros., in 1996; Hanna and Barbera stayed on as advisors.

Hanna and Barbera directed seven Academy Award films and won eight Emmy Awards. Their cartoon shows have become cultural icons, and their cartoon characters have appeared in other media such as films, books, and toys. Hanna-Barbera’s shows had a worldwide audience of over 300 million people in the 1960s and have been translated into more than 28 languages.

Joseph Barbera was born at 10 Delancey Street in the Little Italy (Lower East Side) section of Manhattan, New York, to Italian immigrants Vincent Barbera (1889-1965), born in Castelvetrano (of Lebanese origins) and Francesca Calvacca Barbera (1875-1969), born in Sciacca, Italy. He grew up speaking Italian. His family moved to Flatbush, Brooklyn, New York when he was four months old. He had two younger brothers, Larry (1912-1999) and Ted (1914-2000), both of whom served in World War II. As a member of the United States Army, Larry participated in the invasion of Sicily. Ted was a fighter pilot with the United States Army Air Forces and served in the Aleutian Islands Campaign. Barbera’s father, Vincent, was the prosperous owner of three barbershops who squandered the family fortunes on gambling. By the time Barbera was 15, his father had abandoned the family and his maternal uncle Jim became a father figure to him.

Barbera displayed a talent for drawing as early as the first grade. He graduated from Erasmus Hall High School in Brooklyn in 1928. While in high school, Barbera won several boxing titles. He was briefly managed by World Lightweight Boxing Champion Al Singer’s manager but soon lost interest in boxing. In 1935, Barbera married his high school sweetheart, Dorothy Earl. In school, they had been known as “Romeo and Juliet”.

Barbera and his wife briefly separated when he went to California. They reunited but were on the verge of another separation when they discovered that Dorothy was pregnant with their first child. They had four children: two sons (Neal and an infant boy who died two days after his birth) and two daughters (Lynn and Jayne, who has been a producer in her own right). The marriage officially ended in 1963. Shortly after his divorce, Barbera met his second wife, Sheila Holden, sister of British rock and roll singer Vince Taylor at Musso & Frank’s restaurant, where she worked as bookkeeper and cashier. Unlike Dorothy, who had preferred to stay at home with the children, Sheila enjoyed the Hollywood social scene that Barbera often frequented.

During high school, Barbera worked as a tailor’s delivery boy. In 1929, he became interested in animation after watching a screening of The Skeleton Dance. During the Great Depression, he tried unsuccessfully to become a cartoonist for a magazine called The NY Hits Magazine. He supported himself with a job at a bank, and continued to pursue publication for his cartoons. His magazine drawings of single cartoons, not comic strips, began to be published in Redbook, Saturday Evening Post, and Collier’s—the magazine with which he had the most success. Barbera also wrote to Walt Disney for advice on getting started in the animation industry. Disney wrote back, saying he would call Barbera during an upcoming trip to New York, but the call never took place.

Barbera took art classes at the Art Students League of New York and the Pratt Institute and was hired to work in the ink and paint department of Fleischer Studios. In 1932, he joined the Van Beuren Studios as an animator and storyboard artist. He worked on cartoon series such as Cubby Bear and Rainbow Parades, and an earlier Tom and Jerry. This Tom and Jerry series starred two humans; it was unrelated to Barbera’s later cat-and-mouse series. When Van Beuren closed down in 1936, Barbera moved over to Paul Terry’s Terrytoons studio.