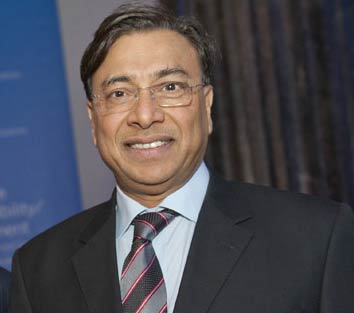 Lakshmi Niwas Mittal (born 15 June 1950) is an Indian steel magnate, based in the United Kingdom. He is the chairman and CEO of ArcelorMittal, the world’s largest steelmaking company. Mittal owns 38% of ArcelorMittal and holds an 20% stake in Queens Park Rangers F.C.

In 2005, Forbes ranked Mittal as the third-richest person in the world, making him the first Indian citizen to be ranked in the top ten in the publication’s annual list of the world’s richest people. In 2007, Mittal was considered to be the richest Asian person in Europe. He was ranked the sixth-richest person in the world by Forbes in 2011, but dropped to 82nd place in March 2015. He is also the “57th-most powerful person” of the 72 individuals named in Forbes’ “Most Powerful People” list for 2015. His daughter Vanisha Mittal’s wedding was the second-most expensive in recorded history.

Mittal was born in a Baniya Family. He studied at Shri Daulatram Nopany Vidyalaya, Calcutta from 1957 to 1964. He graduated from St. Xavier’s College, affiliated to the University of Calcutta, with a B.Com degree in the first class. His father, Mohanlal Mittal, ran a steel business, Nippon Denro Ispat.

In 1976, due to the curb of steel production by the Indian government, the 26-year-old Mittal opened his first steel factory PT Ispat Indo in Sidoarjo, East Java, Indonesia. Until the 1990s, the family’s main assets in India were a cold-rolling mill for sheet steels in Nagpur and an alloy steels plant near Pune. Today, the family business, including a large integrated steel plant near Mumbai, is run by his younger brothers Pramod Mittal and Vinod Mittal, but Lakshmi has no connection with it.

After witnessing India win only one medal, bronze, in the 2000 Summer Olympics, and one medal, silver, at the 2004 Summer Olympics, Mittal decided to set up the Mittal Champions Trust with $9 million to support ten Indian athletes with world-beating potential. In 2008, Mittal awarded Abhinav Bindra with Rs. 1.5 Crore (Rs. 15 million), for getting India its first individual Olympic gold medal in shooting. ArcelorMittal also provided steel for the construction of the ArcelorMittal Orbit for the 2012 Summer Olympics.

For Comic Relief he matched the money raised (~£1 million) on the celebrity special BBC programme, The Apprentice.

In 2003, the Lakshmi Niwas Mittal and Usha Mittal Foundation and the Government of Rajasthan partnered together to establish a university, the LNM Institute of Information Technology (LNMIIT) in Jaipur as an autonomous non-profit organisation.

In 2009, the Foundation along with Bharatiya Vidya Bhavan founded the Usha Lakshmi Mittal Institute of Management in New Delhi.

In 2008 the Mittals made a donation of £15 million to Great Ormond Street Hospital in London, the largest private contribution the hospital had ever received. The donation was used to help fund their new facility, the Mittal Children’s Medical Centre.

Mittal was born on 15 June 1950 in Rajasthani marwari family in Sadulpur, Rajasthan. He is married to Usha Mittal. They have a son Aditya Mittal and a daughter Vanisha Mittal.

Lakshmi Mittal has two brothers, Pramod Mittal and Vinod Mittal, and a sister, Seema Lohia, who married Indonesian businessman, Sri Prakash Lohia. His residence at 18–19 Kensington Palace Gardens—which was purchased from Formula One boss Bernie Ecclestone in 2004 for £67 million (US$128 million)—made it the world’s most expensive house at the time. The house is decorated with marble taken from the same quarry that supplied the Taj Mahal. The extravagant show of wealth has been referred to as the “Taj Mittal”. It has 12 bedrooms, an indoor pool, Turkish baths and parking for 20 cars. He is a lacto-vegetarian.

Mittal bought No. 9A Palace Greens, Kensington Gardens, formerly the Philippines Embassy, for £70 million in 2008 for his daughter Vanisha Mittal who is married to Amit Bhatia, a businessman and philanthropist. Mittal threw a lavish “vegetarian reception” for Vanisha in the Palace of Versailles, France.

In 2005, he also bought a colonial bungalow for $30 million at No. 22, Dr APJ Abdul Kalam Road, New Delhi, one of the most exclusive streets in India, occupied by embassies and billionaires, and rebuilt it as a house.

In December 2013, Mittal’s niece Shrishti Mittal got married in a three-day celebration that is said to have brought Barcelona to a standstill and cost up to £50 million. Some 200 butlers, cooks and secretaries were reportedly flown into Spain from India and Thailand while the 500 guests were made to sign confidentiality agreements.

According to the Sunday Times Rich List 2016, Mittal and his family had an estimated personal net worth of GB£7.12 billion, a decrease of $2.08 billion on the previous year. Meanwhile, in 2016 Forbes magazine’s annual billionaires list assessed estimated Mittal’s wealth in 2016 at as the 135th-wealthiest billionaire with a net worth of US$8.4 billion. Mittal’s net worth peaked in 2008, assessed by The Sunday Times at £27.70 billion, and by Forbes at US$45.0 billion, and rated as the fourth-wealthiest individual in the world.