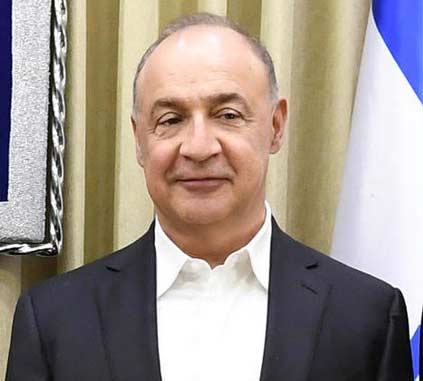 Sir Leonard Blavatnik (born June 14, 1957) is a British-American businessman, investor, and philanthropist. He made his fortune through business via diversified investments in myriad companies through his conglomerate company, Access Industries.

As of May 2020, Blavatnik was the 4th wealthiest man in the United Kingdom. In July 25, 2020, American business magazine, Forbes listed Blavatnik as the 45th wealthiest person in the world, with an estimated net worth of USD$25.9 billion. In 2017, Blavatnik received a knighthood for services to philanthropy.

Blavatnik was born in Odessa, Soviet Ukraine, to a Jewish family. He attended Moscow State University of Railway Engineering, but did not complete his coursework due to the family’s request for emigration visas. His family emigrated from the Soviet Union to the United States of America in 1978, and he received a master’s degree in computer science from Columbia University and an MBA from Harvard Business School in 1989.

In 1986, Blavatnik founded Access Industries, an international conglomerate company located in New York, of which he is chairman and president. Access has long-term holdings in Europe and North and South America. Initially, he moved into Russian investments, just after the fall of communism. He and a friend from university, Viktor Vekselberg, formed the Renova investment vehicle, and then the two joined with Mikhail Fridman’s Alfa Group to form the AAR venture. Access has since diversified its portfolio to include investments in industries such as oil, entertainment, coal, aluminum, petrochemicals and plastics, telecommunications, media, and real estate.

In August 2005, Access Industries bought petrochemicals and plastics manufacturer Basell Polyolefins from Royal Dutch Shell and BASF for $5.7 billion. On December 20, 2007, Basell completed its acquisition of the Lyondell Chemical Company for an enterprise value of approximately $19 billion. The resulting company, LyondellBasell Industries then became the world’s eighth largest chemical company based on net sales. On January 6, 2009, the U.S. operations of LyondellBasell Industries filed for bankruptcy.

On April 30, 2010, LyondellBasell emerged from Chapter 11 bankruptcy protection in a significantly improved financial position. As part of its exit financing, LyondellBasell raised $3.25 billion of first priority debt as well as $2.8 billion through the rights offering jointly underwritten by Access Industries, Apollo Management, and Ares Management.[13] LyondellBasell stock has increased 103% in value since April 2010. Access currently owns approximately 14% of LyondellBasell.

AAR gained a controlling stake in Russian oil company TNK through privatization auctions, then in 2003 sold a 50% stake to British Petroleum to form TNK-BP, one of Russia’s largest oil companies, where Blavatnik served on the board of directors. On March 21, 2013, Rosneft completed its $55 billion acquisition of TNK-BP. Blavatnik also has interests in UC Rusal, the world’s largest aluminum producer, where he sits on the board. On May 6, 2011, Warner Music Group announced its sale to Access for US$3.3 billion.

In early 2010, Access Industries was reported as one of the handful of bidders for Metro-Goldwyn-Mayer.

In 2016, Blavatnik launched Access Entertainment, which bought James Packer’s stake in RatPac Entertainment and a 24.9% stake in Bad Wolf in 2017.

In April 2018, it was reported that Blavatnik was a front runner in the bidding to purchase Britain’s third oldest theatre, the Theatre Royal Haymarket. Sources report that the bid is around £40 million

Blavatnik also owns AI Film, the independent film and production company which backed Lee Daniels’ film The Butler and the summer 2015 release Mr. Holmes. He was an early investor in Rocket Internet and Beats Music, helped finance fashion designer Tory Burch, and in 2013 paid $115 million for wireless spectrum in Norway.

In the Sunday Times Rich List 2015, Blavatnik was listed as the UK’s richest person, with a fortune of £16.9 billion. Forbes ranks Blavatnik as the 59th richest in the world as of November 2019. As of 2019, Len Blavatnik was ranked 27th in the Forbes 400 list.

Blavatnik is married to Emily Appelson Blavatnik. The couple have four children, including daughter Laila.

He owns a grade II listed building in Kensington Palace Gardens which is valued at £200 million as well as a residence in Manhattan valued at more that $250 million.

Blavatnik is a friend of Israeli Prime Minister Benjamin Netanyahu.

Blavatnik is also a longtime friend and business partner of Ukrainian-born Russian oligarch Viktor Vekselberg, one of Russia’s richest men, who is close to Russian President Vladimir Putin.

In 2013 Blavatnik was made chevalier of the French Legion d’Honneur. He was knighted by Queen Elizabeth II in the 2017 Birthday Honours for services to philanthropy.