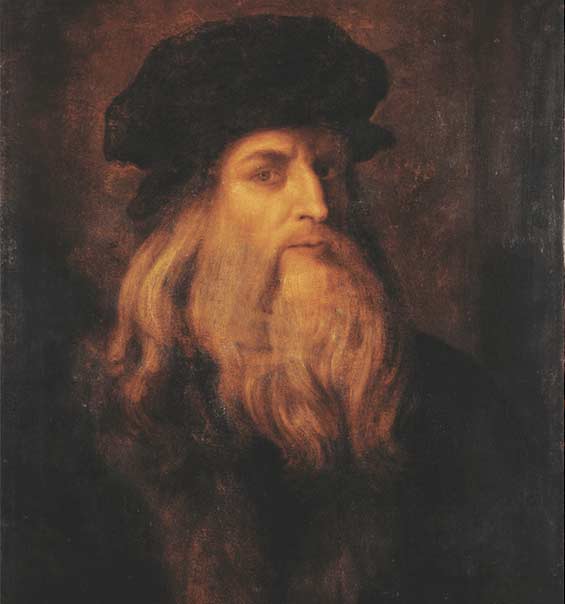 Series: Madonna of the Yarnwinder, Leda and the Swan

Leonardo di ser Piero da Vinci (14/15 April 1452 – 2 May 1519) was an Italian polymath of the Renaissance whose areas of interest included science and invention, drawing, painting, sculpture, architecture, music, mathematics, engineering, literature, anatomy, geology, astronomy, botany, paleontology, and cartography. He has been variously called the father of palaeontology, ichnology, and architecture, and is widely considered one of the greatest painters of all time (despite perhaps only 15 of his paintings having survived).

Born out of wedlock to a notary, Piero da Vinci, and a peasant woman, Caterina, in Vinci, in the region of Florence, Italy, Leonardo was educated in the studio of the renowned Italian painter Andrea del Verrocchio. Much of his earlier working life was spent in the service of Ludovico il Moro in Milan, and he later worked in Rome, Bologna and Venice. He spent his last three years in France, where he died in 1519.

Leonardo is renowned primarily as a painter. The Mona Lisa is the most famous of his works and the most famous portrait ever made. The Last Supper is the most reproduced religious painting of all time and his Vitruvian Man drawing is also regarded as a cultural icon. Salvator Mundi was sold for a world record $450.3 million at a Christie’s auction in New York, 15 November 2017, the highest price ever paid for a work of art. Leonardo’s paintings and preparatory drawings—together with his notebooks, which contain sketches, scientific diagrams, and his thoughts on the nature of painting—compose a contribution to later generations of artists rivalled only by that of his contemporary Michelangelo.

Although he had no formal academic training, many historians and scholars regard Leonardo as the prime exemplar of the “Universal Genius” or “Renaissance Man”, an individual of “unquenchable curiosity” and “feverishly inventive imagination.” He is widely considered one of the most diversely talented individuals ever to have lived. According to art historian Helen Gardner, the scope and depth of his interests were without precedent in recorded history, and “his mind and personality seem to us superhuman, while the man himself mysterious and remote.” Scholars interpret his view of the world as being based in logic, though the empirical methods he used were unorthodox for his time.

Leonardo is revered for his technological ingenuity. He conceptualized flying machines, a type of armoured fighting vehicle, concentrated solar power, an adding machine, and the double hull. Relatively few of his designs were constructed or even feasible during his lifetime, as the modern scientific approaches to metallurgy and engineering were only in their infancy during the Renaissance. Some of his smaller inventions, however, entered the world of manufacturing unheralded, such as an automated bobbin winder and a machine for testing the tensile strength of wire. He is also sometimes credited with the inventions of the parachute, helicopter, and tank. He made substantial discoveries in anatomy, civil engineering, geology, optics, and hydrodynamics, but he did not publish his findings and they had little to no direct influence on subsequent science.

Leonardo was born out of wedlock to notary Piero da Vinci and a peasant woman named Caterina in Vinci in the region of Florence, and he was educated in the studio of Florentine painter Andrea del Verrocchio. Much of his earlier working life was spent in the service of Ludovico il Moro in Milan. He later worked in Rome, Bologna, and Venice, and he spent his last years in France at the home awarded to him by Francis I.

Leonardo was born on 14/15 April 1452 in the Tuscan hill town of Vinci, in the lower valley of the Arno river in the territory of the Medici-ruled Republic of Florence. He was the out-of-wedlock son of Messer Piero Fruosino di Antonio da Vinci, a wealthy Florentine legal notary, and a peasant named Caterina, identified as Caterina Buti del Vacca and more recently as Caterina di Meo Lippi by historian Martin Kemp. There have been many theories regarding Leonardo’s mother’s identity, including that she was a slave of foreign origin or an impoverished local youth. Leonardo had no surname in the modern sense—da Vinci simply meaning “of Vinci”; his full birth name was Lionardo di ser Piero da Vinci, meaning “Leonardo, (son) of ser Piero (from) Vinci.”

Leonardo spent his first years in the hamlet of Anchiano in the home of his mother, and from at least 1457 lived in the household of his father, grandparents and uncle in the small town of Vinci. His father had married a 16-year-old girl named Albiera Amadori, who loved Leonardo but died young in 1465 without children. In 1468, when Leonardo was 16, his father married again to 20-year-old Francesca Lanfredini, who also died without children. Piero’s legitimate heirs were born from his third wife Margherita di Guglielmo, who gave birth to six children, and his fourth and final wife, Lucrezia Cortigiani, who bore him another six heirs. In all, Leonardo had 12 half-siblings, who were much younger than he was (the last was born when Leonardo was 40 years old) and with whom he had very little contact.

Leonardo received an informal education in Latin, geometry and mathematics. In later life, Leonardo recorded few distinct childhood incidents. One was of a kite coming to his cradle and opening his mouth with its tail; he regarded this as an omen of his writing on the subject. The second occurred while he was exploring in the mountains: he discovered a cave and was both terrified that some great monster might lurk there and driven by curiosity to find out what was inside. He also seems to have remembered some of his childhood observations of water, writing and crossing out the name of his hometown in one of his notebooks on the formation of rivers.

Leonardo’s early life has been the subject of historical conjecture. Vasari, the 16th-century biographer of Renaissance painters, tells a story of Leonardo as a very young man: A local peasant made himself a round shield and requested that Ser Piero have it painted for him. Leonardo, inspired by the story of Medusa, responded with a painting of a monster spitting fire that was so terrifying that his father bought a different shield to give to the peasant and sold Leonardo’s to a Florentine art dealer for 100 ducats, who in turn sold it to the Duke of Milan.

Despite the recent awareness and admiration of Leonardo as a scientist and inventor, for the better part of four hundred years his fame rested on his achievements as a painter. A handful of works that are either authenticated or attributed to him have been regarded as among the great masterpieces. These paintings are famous for a variety of qualities that have been much imitated by students and discussed at great length by connoisseurs and critics. By the 1490s Leonardo had already been described as a “Divine” painter.

Among the qualities that make Leonardo’s work unique are his innovative techniques for laying on the paint; his detailed knowledge of anatomy, light, botany and geology; his interest in physiognomy and the way humans register emotion in expression and gesture; his innovative use of the human form in figurative composition; and his use of subtle gradation of tone. All these qualities come together in his most famous painted works, the Mona Lisa, the Last Supper, and the Virgin of the Rocks.