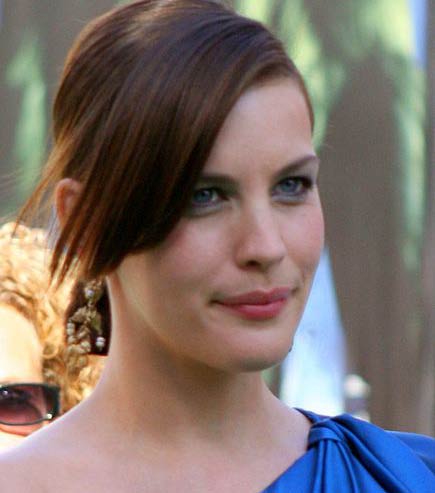 Tyler is also a singer, having sung with composer Howard Shore. She appeared as guest vocalist on The Lemonheads’ album Varshons (2009), singing a cover of the Leonard Cohen song “Hey, That’s No Way to Say Goodbye”. She appeared on the 2017 bonus disk of Evan Dando’s album Baby I’m Bored (2003), providing featured vocals for the song “Shots is Fired”. In 2011, Tyler released her debut single, “Need You Tonight”.

Tyler has served as a UNICEF Goodwill Ambassador for the United States since 2003, and as a spokesperson for Givenchy’s line of perfume and cosmetics. She is the daughter of Steven Tyler and Bebe Buell, although she has a very close relationship with her adoptive father Todd Rundgren.

Tyler was born Liv Rundgren on July 1, 1977, in New York City at Mount Sinai Hospital in East Harlem. She is the only daughter of Bebe Buell, a model, singer, and former Playboy Playmate (Miss November 1974), and Steven Tyler, the lead singer of Aerosmith. Her mother named her after Norwegian actress Liv Ullmann, after seeing Ullmann on the cover of the March 5, 1977, issue of TV Guide. Her ancestry includes Italian (from her great-grandfather), German, Polish, and English. Tyler has three half-siblings: Mia Tyler (born 1978), Chelsea Anna Tallarico (born 1989), and Taj Monroe Tallarico (born 1991). Her maternal grandmother, Dorothea Johnson, founded the Protocol School of Washington.

From 1972 to 1979, Buell lived with rock musician Todd Rundgren. In 1976, Buell became pregnant from a brief relationship with Steven Tyler. She gave birth on July 1, 1977, naming the daughter Liv Rundgren and claiming that Todd Rundgren was the biological father. By then Rundgren and Buell had ended their romantic relationship, but Rundgren nevertheless signed the birth certificate and acted as a father figure to Liv, including paying for her education.

At age 10 or 11, Liv met Steven Tyler and suspected he was her father. When she asked her mother, the secret was revealed. The truth about Tyler’s paternity did not become public until 1991, when she changed her surname from Rundgren to Tyler, but kept Rundgren as a middle name. Buell’s stated reason for claiming that Rundgren was Liv’s father was that Steven Tyler was too heavily addicted to drugs at the time of Liv’s birth. Since learning the truth about her paternity, Liv and Steven have developed a close relationship. They also have worked together professionally, once when she appeared in Aerosmith’s music video for “Crazy” in 1993, and again when Aerosmith performed songs in the film Armageddon (1998), in which Tyler starred.

Tyler maintains a close relationship with Rundgren. “I’m so grateful to him, I have so much love for him. You know, when he holds me it feels like Daddy. And he’s very protective and strong.”

Tyler attended the Congressional Schools of Virginia, Breakwater School, and Waynflete School in Portland, Maine, before returning to New York City with her mother at age 12. She went to York Preparatory in New York City for junior high and high school after her mother researched the school to accommodate Tyler’s ADHD. She also attended the Crossroads School for Arts & Sciences in Santa Monica, California. She graduated from York in 1995 and left to continue her acting career. When asked about her youth, Tyler said: “For me, I didn’t get much of a childhood in my teen years because I’ve been working since I was 14. But that also kept me out of trouble. When everybody was doing acid and partying like crazy, I was at work on a movie in Tuscany … having my own fun, of course, but it was a different kind of thing. I have no regrets. I love the way my life has gone.”

Tyler dated her Inventing the Abbotts co-star Joaquin Phoenix from 1995 to 1998. While Tyler was in her relationship with Phoenix, she became a vegan. However, after the relationship ended, Tyler went back to eating meat. In 1998, Tyler began dating British musician Royston Langdon of the band Spacehog. They became engaged in February 2001, and married in Barbados on March 25, 2003. In December 2004, she gave birth to a son. On May 8, 2008, the couple confirmed through representatives that they would be separating.

In June 2010, Tyler stated she was “far too sensitive” for casual dates, adding “I fall in love once in a blue moon.”

In 2014, Tyler met David Gardner, a British sports and entertainment manager. They became engaged in July 2015. They have two children together, a son born in February 2015, and a daughter born in July 2016. She later temporarily moved to London shortly after her daughter’s birth.

Tyler learned transcendental meditation in New York City. In December 2012, she participated in a charity gala for the David Lynch Foundation to provide transcendental meditation to disadvantaged sections of society. At the event, she said, “it helps me make better decisions and be a better mother, and just deal with the daily stress of the modern world that we live in. It helps with everything.”

Tyler owns an apartment on West 11th Street in Greenwich Village, New York City, and has resided in London since 2018. She also has purchased a house in Malibu, California.

Activism
Tyler is an active supporter of the charitable United Nations Children’s Fund (UNICEF). She was appointed as a Goodwill Ambassador for the United States in 2003. In November 2004, she hosted the lighting of the UNICEF Snowflake in New York City. She also served as spokesperson for the 2004 Givenchy Mother’s Day promotion, in support of UNICEF’s Maternal and Neonatal Tetanus campaign.

Since 2004, she has donated to the Women’s Cancer Research Fund to support innovative research, education, and outreach directed at the development of more effective approaches to the early diagnosis, treatment, and prevention of all women’s cancers.In October 2007, Tyler, along with her mother, Bebe Buell, and her grandmother Dorothea Johnson, helped launch the Emergen-C Pink energy drink, in which the event was in honor of Breast Cancer Awareness month.