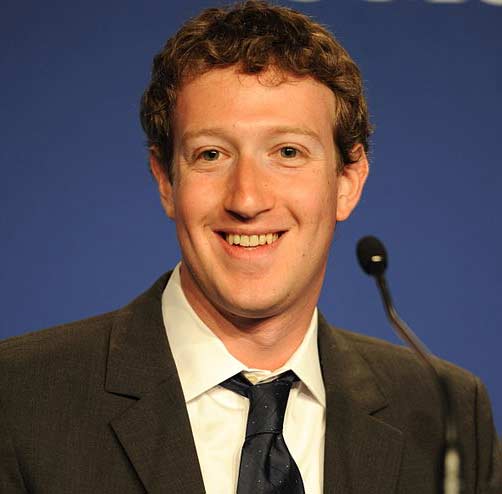 Mark Elliot Zuckerberg (born May 14, 1984) is an American media magnate, internet entrepreneur, and philanthropist. He is known for co-founding Facebook, Inc. and serves as its chairman, chief executive officer, and controlling shareholder. He also is a co-founder of the solar sail spacecraft development project Breakthrough Starshot and serves as one of its board members.

Born in White Plains, New York, Zuckerberg attended Harvard University, where he launched the Facebook social networking service from his dormitory room on February 4, 2004, with college roommates Eduardo Saverin, Andrew McCollum, Dustin Moskovitz, and Chris Hughes. Originally launched to select college campuses, the site expanded rapidly and eventually beyond colleges, reaching one billion users by 2012. Zuckerberg took the company public in May 2012 with majority shares. In 2007, at age 23, he became the world’s youngest self-made billionaire. As of July 14th, 2020, Zuckerberg’s net worth was estimated at $88.2 billion and he is listed by Forbes as the 4th-richest person in the world. As of 2019, he is the only person under 50 in the Forbes ten richest people list, and the only one under 40 in the Top 20 Billionaires list.

Since 2010, Time magazine has named Zuckerberg among the 100 wealthiest and most influential people in the world as a part of its Person of the Year award. In December 2016, Zuckerberg was ranked 10th on Forbes list of The World’s Most Powerful People. He has also been named at #7 in the Forbes’ Billionaires 2020 list.

Zuckerberg was born on May 14, 1984, in White Plains, New York. His parents are Karen (née Kempner), a psychiatrist, and Edward Zuckerberg, a dentist. He and his three sisters, Randi, Donna, and Arielle, were brought up in Dobbs Ferry, New York, a small Westchester County village about 21 miles north of Midtown Manhattan. Zuckerberg was raised in a Reform Jewish household, and his ancestors hailed from Germany, Austria and Poland. He had a Star Wars-themed bar mitzvah when he turned 13.

At Ardsley High School, Zuckerberg excelled in classes. After two years, he transferred to the private school Phillips Exeter Academy, where he won prizes in mathematics, astronomy, physics, and classical studies. In his youth, he also attended the Johns Hopkins Center for Talented Youth summer camp. On his college application, Zuckerberg stated that he could read and write French, Hebrew, Latin, and ancient Greek. He was captain of the fencing team.

Zuckerberg began using computers and writing software in middle school. His father taught him Atari BASIC Programming in the 1990s, and later hired software developer David Newman to tutor him privately. Zuckerberg took a graduate course in the subject at Mercy College near his home while still in high school. In one program, since his father’s dental practice was operated from their home, he built a software program he called “ZuckNet” that allowed all the computers between the house and dental office to communicate with each other. It is considered a “primitive” version of AOL’s Instant Messenger, which came out the following year.

A New Yorker profile said of Zuckerberg: “some kids played computer games. Mark created them.” Zuckerberg himself recalls this period: “I had a bunch of friends who were artists. They’d come over, draw stuff, and I’d build a game out of it.” The New Yorker piece noted that Zuckerberg was not, however, a typical “geek-klutz”, as he later became captain of his prep school fencing team and earned a classics diploma. Napster co-founder Sean Parker, a close friend, notes that Zuckerberg was “really into Greek odysseys and all that stuff”, recalling how he once quoted lines from the Roman epic poem Aeneid, by Virgil, during a Facebook product conference.

During Zuckerberg’s high school years, he worked under the company name Intelligent Media Group to build a music player called the Synapse Media Player. The device used machine learning to learn the user’s listening habits, which was posted to Slashdot and received a rating of 3 out of 5 from PC Magazine.

Raised Jewish, Zuckerberg once identified as an atheist but has since revised his views. In 2016, he said: “I was raised Jewish and then I went through a period where I questioned things, but now I believe religion is very important.”

He met his then-future wife, fellow Harvard student Priscilla Chan, at a fraternity party during his sophomore year there. They began dating in 2003.

In September 2010, Zuckerberg invited Chan, by then a medical student at the University of California, San Francisco, to move into his rented Palo Alto house. He studied Mandarin in preparation for the couple’s visit to China in December 2010. On May 19, 2012, they married in his backyard in an event that also celebrated her graduation from medical school. On July 31, 2015, Zuckerberg announced that they was expecting a baby girl and revealed that Chan had experienced three miscarriages previously. On December 1, Zuckerberg announced the birth of their daughter, Maxima Chan Zuckerberg (“Max”). The couple announced in their Chinese New Year video that Maxima’s official Chinese name is Chen Mingyu (Chinese: 陈明宇). They welcomed their second daughter, August, in August 2017. Their Puli dog, Beast, has over two million followers on Facebook.

In 2017, he bought 700 acres of land on Kauai, Hawaii, for over $100 million using a controversial legal tactic which compels owners of undeveloped land to sell it at public auction.