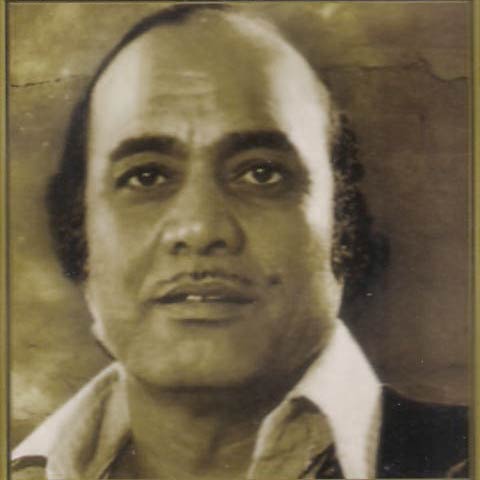 Mehdi Hasan Khan NI PP HI (Urdu: مہدی حسن خاں‎, romanized: Mahdī Hasan Ḳhāṅ; 18 July 1927 – 13 June 2012) was a Pakistani ghazal singer and playback singer for Lollywood. One of the greatest and most influential figures in the history of ghazal singing, he is referred to as the “Shahenshah-e-Ghazal” (King of Ghazal). Known for his “haunting” baritone voice, Mehdi Hassan is credited with bringing ghazal singing to a worldwide audience. He is unique for his melodic patterns and maintaining integrity of the ragas in an innovative way. Born to a musical family, he influenced generations of singers from diverse genres, from Jagjit Singh to Sonu Nigam. He earned numerous awards and accolades in his career and remained a leading singer of Pakistani film industry along with another contemporary playback singer Ahmed Rushdi, and it’s estimated that “he sang and created soundtracks for almost 300 movies.”

Mehdi Hassan was born on 18 July 1927 in a village called Luna (Shekhawati) (Near Mandawa) in Jhunjhunu district in British India into a family of traditional musicians. He claims to be the 16th generation of hereditary musicians hailing from the Kalawant clan of musicians. Mehdi Hassan had his musical grooming from his father Ustad Azeem Khan and uncle Ustad Ismail Khan who were both traditional Dhrupad singers. Hassan started to perform at a young age and the first concert of dhrupad and kheyal with his elder brother is reported to have been held in Fazilka Bungla, near present DC House (1935) of Undivided Punjab. His elder brother Pandit Ghulam Qadir also was very encouraging in sharpening his skills.

In 1947, India became independent and its partition took place, creating a new, Muslim-majority country, Pakistan. The 20-year-old Hassan and his family migrated to Pakistan, carrying little with them by way of material goods. They suffered severe financial hardships in their new country. Mehdi initially started working in Chichawatni, in a bicycle shop Mughal Cycle House. He later became a car and diesel tractor mechanic. Despite the financial hardships, he kept up the routine of his singing practice on a daily basis and kept of practicing difficult Raags.

In 1957, Mehdi Hassan was again given the opportunity to sing on Radio Pakistan, primarily as a thumri singer, which earned him recognition within the musical fraternity. He had a passion for Urdu poetry, and therefore, he began to experiment by singing ghazals on a part-time basis. He cites radio officers Z.A. Bukhari and Rafiq Anwar as additional influences in his progression as a ghazal singer. He first sang on Radio Pakistan in 1952. His first film song was “Nazar Milte Hi Dil Ki Bat Ka Charcha Na Ho Jaye” film Shikar in 1956. This song was written by poet Yazdani Jalandhari and its music was composed by Asghar Ali M. Husain. In 1964, his ghazal for a film Farangi, “Gulon mein rang bharay, baad-e-naubahar chale” written by renowned Pakistani poet Faiz Ahmed Faiz and composed by Rasheed Attre, gave him a major breakthrough into the Pakistani film industry and he never looked back after that. Even the original ghazal poet Faiz Ahmed Faiz stopped reciting it in his ‘mushairas’ (poetry reciting events) and, instead, recommended that the audience ask Mehdi Hassan to sing it for them because the poet jokingly used to say that the ghazal belonged to Mehdi Hassan after its popularity.

Following a severe illness in the late 1980s, Mehdi Hassan stepped down from playback singing. Later due to severity of his illness he completely departed from music.

In 1977, Lata Mangeshkar was so moved by his dulcet vocals during a New Delhi concert that she’s reported to have said, “Aisa lagta hai ke unke gale mein bhagwan boltein hain,” (It feels like God is singing through his voice). In October 2010, HMV Label released “Sarhadein” in which probably the first and last duet song Tera Milana featuring Mehdi Hassan and Lata Mangeshkar was released. This song was composed by Mehdi Hassan himself, written by Farhat Shahzad. Mehdi Hassan recorded it in Pakistan in 2009, and Lata Mangeshkar later heard the track and recorded her part in India in 2010, and the song was later mixed together for a duet. The same duet, “Tera Milna,” was also sung by Mehdi Hassan and Noor Jehan. Mehdi Hassan is regarded as one of the best singers in the sub-continent. On 18 July 2018, the day of his 91st birthday, Google featured Mehdi Hassan on its homepage doodle.

He had been suffering from a serious lung condition for a few years before his death. Mehdi Hassan died at around noon on 13 June 2012 at Aga Khan University Hospital, Karachi after suffering a 12-year-long tenure of lung, chest and urinary tract diseases. Towards the end of 2000, he suffered his first stroke. In 2005, he was taken to India for ayurvedic treatment where he was welcomed by A.B. Vajpayee, Dilip Kumar, Lata Mangeshkar and many other of his Indian fans. He suffered his second stroke soon after he returned from India and that stroke left him speechless and helpless until his death on 13 June 2012.

The following civilian honours have been conferred on him, in chronological order.[18]

The Government of India

The Government of Nepal

The Government of Pakistan

He had been the recipient of numerous awards and recognitions: the Tamgha-i-Imtiaz granted to him by Gen Ayub Khan; the Pride of Performance bestowed on him by Gen Ziaul Haq; and the Hilal-i-Imtiaz conferred by Gen Pervez Musharraf. Besides the Nigar Film and Graduate Awards from Pakistan, he was presented the Saigal Award in Jalandhar, India, in 1979, whereas the Gorkha Dakshina Bahu Award was given to him in Nepal in 1983. Recently, he travelled to Dubai to receive yet another award.