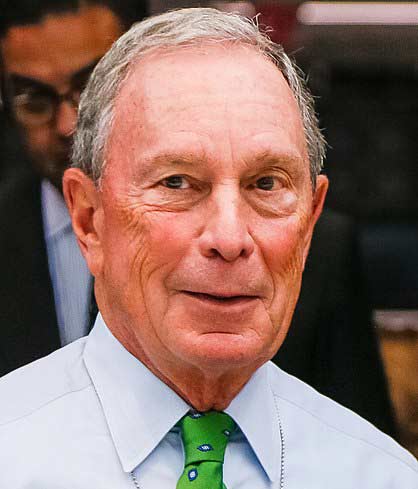 Michael Rubens Bloomberg KBE (born February 14, 1942) is an American businessman, politician, philanthropist, and author. He is the majority owner and co-founder of Bloomberg L.P.. He was the mayor of New York City from 2002 to 2013, and was a candidate in the 2020 Democratic presidential primaries.

Bloomberg grew up in Medford, Massachusetts and graduated from Johns Hopkins University and Harvard Business School. He began his career at the securities brokerage Salomon Brothers before forming his own company in 1981. That company, Bloomberg L.P., is a financial information, software and media firm that is known for its Bloomberg Terminal. Bloomberg spent the next twenty years as its chairman and CEO. In 2020, Forbes ranked him as the sixteenth-richest person in the world, with an estimated net worth of $48 billion as of 7 April 2020 and as of 21 July 2020, Bloomberg ranked 8th in Forbes 400 with net worth $60.1 billion . Since signing The Giving Pledge, Bloomberg has given away $8.2 billion.

Bloomberg was elected the 108th mayor of New York City. First elected in 2001, he held office for three consecutive terms, winning re-election in 2005 and in 2009. Pursuing socially liberal and fiscally moderate policies, Bloomberg developed a technocratic managerial style. After a brief stint as a full-time philanthropist, he re-assumed the position of CEO at Bloomberg L.P. by the end of 2014.

As mayor of New York, Bloomberg established public charter schools, rebuilt urban infrastructure, and supported gun control, public health initiatives, and environmental protections. He also led a rezoning of large areas of the city, which facilitated massive and widespread new commercial and residential construction after the September 11 attacks. Bloomberg is considered to have had far-reaching influence on the politics, business sector, and culture of New York City during his three terms as mayor. He has also faced significant criticism for his expansion of the city’s stop and frisk program, support for which he reversed with an apology before his 2020 presidential run.

Bloomberg was born at St. Elizabeth’s Hospital, in Brighton, a neighborhood of Boston, Massachusetts, on February 14, 1942, to William Henry Bloomberg (1906–1963), a bookkeeper for a dairy company, and Charlotte (née Rubens) Bloomberg (1909–2011). The Bloomberg Center at the Harvard Business School was named in William Henry’s honor. His family is Jewish, and he is a member of the Emanu-El Temple in Manhattan. Bloomberg’s paternal grandfather, Alexander “Elick” Bloomberg, was a Polish Jew. Bloomberg’s maternal grandfather, Max Rubens, was a Lithuanian Jewish immigrant from present-day Belarus. His maternal grandmother was born in New York to Lithuanian Jewish parents.

The family lived in Allston until Bloomberg was two years old, followed by Brookline, Massachusetts for two years, finally settling in the Boston suburb of Medford, Massachusetts, where he lived until after he graduated from college.

Bloomberg is an Eagle Scout and he graduated from Medford High School in 1960. He went on to attend Johns Hopkins University, where he joined the fraternity Phi Kappa Psi and constructed the school mascot’s (the blue jay’s) costume. He graduated in 1964 with a Bachelor of Science degree in electrical engineering. In 1966, he graduated from Harvard Business School with a Master of Business Administration.

Bloomberg is a member of Kappa Beta Phi. He wrote an autobiography, with help from Bloomberg News Editor-in-Chief Matthew Winkler, called Bloomberg by Bloomberg.

In 1975, Bloomberg married Susan Elizabeth Barbara Brown, a British national from Yorkshire, United Kingdom. They have two daughters: Emma (born c. 1979) and Georgina (born 1983), who were featured on Born Rich, a 2003 documentary film about the children of the extremely wealthy. Bloomberg divorced Brown in 1993, but he has said she remains his “best friend.” Since 2000, Bloomberg has lived with former New York state banking superintendent Diana Taylor.

Bloomberg’s younger sister, Marjorie Tiven, has been Commissioner of the New York City Commission for the United Nations, Consular Corps and Protocol, since February 2002. His daughter Emma is married to Christopher Frissora, son of multimillionaire businessman Mark Frissora.

Although he attended Hebrew school, had a bar mitzvah, and his family kept a kosher kitchen, Bloomberg today is relatively secular, attending synagogue mainly during the High Holidays and a Passover Seder with his sister, Marjorie Tiven. Neither of his daughters had bat mitzvahs.

Throughout his business career, Bloomberg has made numerous statements which have been considered by some to be insulting, derogatory, sexist or misogynistic. When working on Wall Street in the 1960s and 1970s, Bloomberg claimed in his 1997 autobiography, he had “a girlfriend in every city”. On various occasions, Bloomberg allegedly commented “I’d do her”, regarding certain women, some of whom were coworkers or employees. Bloomberg later said that by “do”, he meant that he would have a personal relationship with the woman. Bloomberg’s staff told the New York Times that he now regrets having made “disrespectful” remarks concerning women.

During his term as mayor, he lived at his own home on the Upper East Side of Manhattan instead of Gracie Mansion, the official mayoral residence. In 2013, he owned 13 properties in various countries around the world, including a $20 million Georgian mansion in Southampton, New York. In 2015, he acquired 4 Cheyne Walk, a historical property in Cheyne Walk, Chelsea, London, which once belonged to writer George Eliot. Bloomberg and his daughters own houses in Bermuda and stay there frequently.

Bloomberg stated that during his mayoralty, he rode the New York City Subway on a daily basis, particularly in the commute from his 79th Street home to his office at City Hall. An August 2007 story in The New York Times stated that he was often seen chauffeured by two New York Police Department-owned SUVs to an express train station to avoid having to change from the local to the express trains on the IRT Lexington Avenue Line. He supported the construction of the 7 Subway Extension and the Second Avenue Subway; in December 2013, Bloomberg took a ceremonial ride on a train to the new 34th Street station to celebrate a part of his legacy as mayor.

During his tenure as mayor, Bloomberg made cameos playing himself in the films The Adjustment Bureau and New Year’s Eve, as well as in episodes of 30 Rock, Curb Your Enthusiasm, The Good Wife, and two episodes of Law & Order.

Bloomberg is a private pilot. He owns six airplanes: three Dassault Falcon 900s, a Beechcraft B300, a Pilatus PC-24, and a Cessna 182 Skylane. Bloomberg also owns two helicopters: an AW109 and an Airbus helicopter and as of 2012 was near the top of the waiting list for an AW609 tiltrotor aircraft. In his youth he was a licensed amateur radio operator, was proficient in Morse code, and built ham radios.