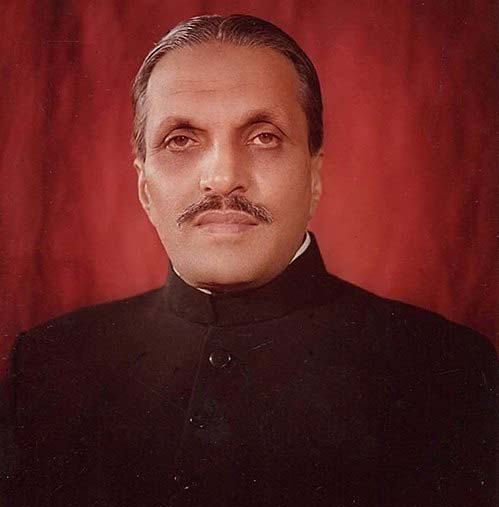 Cause of Death: Airplane crash

Muhammad Zia-ul-Haq (12 August 1924 – 17 August 1988) was a Pakistani four-star general who became the sixth President of Pakistan after declaring martial law in 1977. He served as the head of state from 1978 until his death in 1988. He remains the country’s longest-serving head of state.

Educated at Delhi University, Zia saw action in World War II as a British Indian Army officer in Burma and Malaya, before opting for Pakistan in 1947 and fighting as a tank commander in the Indo-Pakistani War of 1965. In 1970, he led a military training mission to Jordan, proving instrumental to defeating the Black September insurgency against King Hussein. In recognition, Prime Minister Zulfikar Ali Bhutto appointed Zia Chief of Army Staff in 1976. Following civil disorder, Zia deposed Bhutto in a military coup and declared martial law on 5 July 1977. Bhutto was controversially tried by the Supreme Court and executed less than two years later, for allegedly authorising the murder of Nawab Muhammad Ahmed Khan Kasuri, a political opponent.

Assuming the presidency in 1978, Zia played a major role in the Soviet–Afghan War. Backed by the United States and Saudi Arabia, Zia systematically coordinated the Afghan mujahideen against the Soviet occupation throughout the 1980s. This culminated in the Soviet Union’s withdrawal in 1989, but also led to the proliferation of millions of refugees, with heroin and weaponry into Pakistan’s frontier province. On the foreign front, Zia also bolstered ties with China and the United States, and emphasised Pakistan’s role in the Islamic world, while relations with India worsened amid the Siachen conflict and accusations that Pakistan was aiding the Khalistan movement. Domestically, Zia passed broad-ranging legislation as part of Pakistan’s Islamization, curbed civil liberties, and heightened press censorship. He also escalated Pakistan’s atomic bomb project, and instituted industrialisation and deregulation, helping Pakistan’s economy become the fastest-growing in South Asia. Averaged over Zia’s rule, GDP growth was the highest in the country’s history.

After lifting martial law and holding non-partisan elections in 1985, Zia appointed Muhammad Khan Junejo Prime Minister but accumulated more presidential powers via the Eighth Amendment to the Constitution. After Junejo signed the Geneva Accords in 1988 against Zia’s wishes, and called for an inquiry into the Ojhri Camp disaster, Zia dismissed Junejo’s government and announced fresh elections in November 1988. He was killed along with several of his top military officials and two American diplomats in a mysterious plane crash near Bahawalpur on 17 August 1988. To this day, Zia remains a polarising figure in Pakistan’s history, credited for preventing wider Soviet incursions into the region as well as economic prosperity, but decried for weakening democratic institutions and passing laws encouraging religious intolerance. He is also cited for promoting the early political career of Nawaz Sharif, who would be thrice elected Prime Minister.

Muhammad Zia-ul-Haq was born into a Arain family in Jalandhar, Punjab Province of British India, on 12 August 1924. Zia-ul-Haq was the second child of Muhammad Akbar, who worked in the administrative corps of the Army GHQ of India Command of British Armed Forces in Delhi and Simla, prior to the independence of India from British colonial rule in 1947.

He completed his initial education in Simla and then attended St. Stephen’s College of the University of Delhi for his BA degree in History, from which he graduated with distinction in 1943. He was admitted to the Royal Indian Military Academy at Dehradun, graduating in May 1945 among the last group of officers to be commissioned before the independence of India. During his collegiate years, he was noted as an extraordinary talent.

He married Shafiq Jahan in 1950. Begum Shafiq Zia died on 6 January 1996. Zia is survived by his sons, Muhammad Ijaz-ul-Haq, (born 1953), who went into politics and became a cabinet minister in the government of Nawaz Sharif, and Anwar-ul-Haq (born 1960) and his daughters, Zain (born 1972), a special needs child, Rubina Saleem, who is married to a Pakistani banker and has been living in the United States since 1980, and Quratulain Zia who currently lives in London, and is married to Pakistani doctor, Adnan Majid.

Zia died in a plane crash on 17 August 1988. After witnessing a US M1 Abrams tank demonstration in Bahawalpur, Zia had left the small town in the Punjab province by C-130B Hercules aircraft. The aircraft departed from Bahawalpur Airport and was expected to reach Islamabad International Airport. Shortly after a smooth takeoff, the control tower lost contact with the aircraft. Witnesses who saw the plane in the air afterward claim it was flying erratically, then nosedived and exploded on impact. In addition to Zia, 31 others died in the plane crash, including chairman Joint Chiefs of Staff Committee General Akhtar Abdur Rahman, close associate of Zia, Brigadier Siddique Salik, the American Ambassador to Pakistan Arnold Lewis Raphel and General Herbert M. Wassom, the head of the US Military aid mission to Pakistan. Ghulam Ishaq Khan, the Senate chairman announced Zia’s death on radio and TV. Conditions surrounding his death have given rise to many conspiracy theories. There is speculation that the United States, India, the Soviet Union (in retaliation for Pakistani support of the mujahideen in Afghanistan) or an alliance of them and internal groups within Zia’s military were behind the incident.

A board of inquiry was set up to investigate the crash. It concluded ‘the most probable cause of the crash was a criminal act of sabotage perpetrated in the aircraft’. It also suggested that poisonous gases were released which incapacitated the passengers and crew, which would explain why no Mayday signal was given. There was also speculation into other facts involving the details of the investigation. A flight recorder (black box) was not located after the crash eventhough previous C-130 aircraft did have them installed.

Maj. Gen. (retd) Mahmud Ali Durrani, who was suspected by many circles within Pakistan and also by the then United States Ambassador to India, John Gunther Dean, for being “extraordinarily insistent” with President Zia to visit the demonstration, is considered to be the prime suspect in the incident. He claimed later that reports of Israeli and Indian involvement in Zia’s plane crash were only speculations and he rejected the statement that was given by former president Ghulam Ishaq Khan that the presidential plane was blown up in the air. Durrani stated that Zia’s plane was destroyed while landing.

Lt. General Hameed Gul, the head of Pakistan’s Inter Services Intelligence agency at the time, suggested that the United States might be responsible, even though the U.S. Ambassador and military attaché were also killed. He told The Times that the Pakistani President was killed in a conspiracy involving a “foreign power”.